I was idly perusing my rss feeds last week, when an article at The Dispersal of Darwin website (Hand-printed, hand-bound book about Wallace, Darwin, and natural selection) caught my eye. There are two attractive features: firstly, the physical attributes – this is a delightful hand-printed book – and secondly, the material in the book is of general interest to me. I should say that I have some of the contents in other books (notably a volume of Darwin and Wallace writing published in 1958 to coincide with the centenary of Origins), and that I have of course long been aware of Wallace in the context of natural selection. This is not a cheap book and it’s intended to contribute to a fund for the erection of a statue of Wallace. There’s a foreword by George Beccaloni which sets out the stall here.

The book is hardback, hand printed and 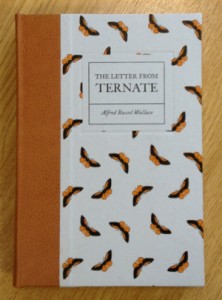 attractively bound in leather with printed design on paper. The contents are correspondence associated with the joint presentation to the Linnean Society, and the three documents that represent that presentation (and extract of unpublished work by Darwin; and abstract of correspondence from Darwin to Asa Gray; an essay by Wallace). The book concludes with correspondence between Darwin, Hooker and Wallace, and finishes with the text of Wallace’s acceptance speech on the award of the Darwin-Wallace medal in 1908.

This is all quite interesting material – I always feel that the private correspondence between Darwin, Wallace and the others reveals quite a bit about their nature. Of course, Wallace’s role on the discovery of evolution by natural selection isn’t new to me, but I do realise that many members of the public really aren’t aware of the circumstances around the discovery, nor of the theory’s antecedents or the social and scientific context in which evolutionary theories were discussed, presented and received during the 18th and 19th centuries. This is something that attempts are being made to rectify (see for example Bill Bailey’s recent BBC TV programme, and accompanying article in The Radio Times). That being said, I don’t quite buy in to the concept of the “Darwin Industry” excluding competing names from the history of natural selection: including Patrick Matthew as well as Wallace. It’s not helpful that ID creationists seem to have picked on Wallace as some kind of forerunner in Intelligent Design creationism.