It’s amusing to see the re-think that happens once the evangelical groups striving to establish free schools in the UK realise that their religious beliefs stand in the way of their plans to indoctrinate children. In recent months we’ve seen the Everyday Champions Church’s proposal for a school founder on the creationism issue, despite senior figures denying their previously explicit creationist stance.  The internet doesn’t forget. And hopefully, the latest plans from the Everyday Champions (Zombie creationist free school to rise from the dead?) will also be unsuccessful.

More recently, a proposal for a christian school in Bedford, the Destiny Christian School, surfaced with a natty website. But what’s this? It’s been changing!  Way back when the website went live, it had a section under About Us| What We Believe which read in part:

The Bible
We believe that God reveals Himself through the Holy Bible, that the Holy Bible to
be infallible, inspired by holy men of God, and the authoritative Word of God. 2 Timothy 3:16

Man
We believe that God created man in His own image. Genesis 1:27

Creator
We believe that God the Father is the Creator of all things, and that He continues to uphold His
creation. Colossians 1:16

Three quotes among several all indicating a literal belief in the Bible, and in particular that the school’s backers are a religious group with a belief in biblical inerrancy and in divine creation (as described by iron age desert nomads).  Now when I visit the current site, there is no section entitled What We Believe, and mention of their beliefs has become strangely absent.

The website features a nice array of logos on the home page: 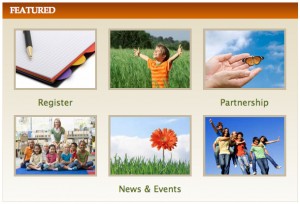 One of the things about off-the-peg websites, I guess, is that one really needs to fill out a number of presupplied links. Those unlabelled images are links back to the ‘Welcome’ page.  But look what was there at the original site: 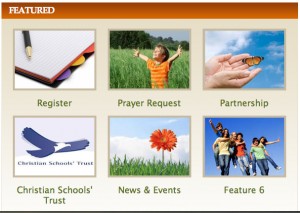 Leaving aside the template-added ‘Feature 6’, note the icon at bottom left (which is now absent from the current site) which is a link to the Christian Schools’ Trust. The BCSE observes of the CST (here) that it is “a loose network of some 50 private Christian schools that teach over 3000 children in the UK (average size of school, 60 pupils – the only one we have checked out has 17 pupils. It isn’t clear how the school is viable with fees of £2,340 a year).”  The CST’s statement of faith is a bit woolly in places, but essentially seems to hold to a literal reading of the bible.  In amongst the usual creepy stuff about “Man’s utter ruin through the fall and his salvation solely by grace through faith in Jesus Christ […]” and “The essential, absolute and eternal deity of the Lord Jesus Christ”, we find the following:

The inerrancy of the Holy Scriptures as originally given, their verbal inspiration by God and their supreme authority as the only rule of faith and practice.

It would seem that in an effort to backtrack from their previous public position on biblical literalism, the proponents of Destiny Christian School feel a need to downplay their links to CST.  And no wonder, given Michael Gove’s ruling against creationism being taught as scientific truth. Incidentally, the description of the four member team behind the proposal also seems to have done a runner.  Maybe this is for privacy reasons, so I won’t paste the information here.

In a recent article on the many creationist free school proposals (More creationist Free Schools planned for 2013 opening) the BHA noted:

In Bedford, Destiny Christian School is being proposed by the Miracle Church of God in Christ, and if approved to open, will be a member school of the Christian Schools’ Trust (CST). At an open meeting attended by a BHA supporter, the group were asked about their policy on creationism and responded that they believe creationism is science and intend to teach it as such.

In God, the Father Almighty, the Author and Creator of all things. (Genesis 1:1 Eph.3:9)

It is to be hoped that this church group don’t succeed in pulling the wool over the eyes of the Michael Gove’s scrutineers by attempting to sanitise their internet presence.  But in any case, we are watching…

One thought on “Free school proposals and hiding the truth”