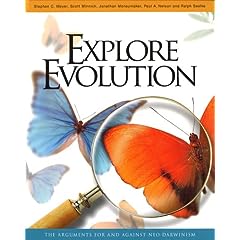 Interestingly, one of the authors of this book, Explore Evolution,  is the same Stephen Meyer who’s book Signature in the Cell: DNA and the Evidence for Intelligent Design was so enthusiastically reviewed by Alastair Noble, proponent of Intelligent Design.  The three authors are all Discovery Institute members; the book itself is published by the creationist run Hill House Publishers, who describe it as follows:

The purpose of Explore Evolution, is to examine the scientific controversy about Darwin’s theory, and in particular, the contemporary version of the theory known as neo-Darwinism. Whether you are a teacher, a student, or a parent, this book will help you understand what Darwin’s theory of evolution is, why many scientists find it persuasive, and why other scientists question the theory or some key aspects of it.

Sometimes, scientists find that the same evidence can be explained in more than one way. When there are competing theories, reasonable people can (and do) disagree about which theory best explains the evidence. Furthermore, in the historical sciences, neither side can directly verify its claims about past events. Fortunately, even though we can’t directly verify these claims, we can test them. How? First, we gather as much evidence as possible and look at it carefully. Then, we compare the competing theories in light of how well they explain the evidence.

Read more at the BCSE page linked above.

From the Wikipedia page (Explore Evolution) – and this is a highly informative page that is well worth reading:

Explore Evolution: The Arguments For and Against Neo-Darwinism is a supplementary or enrichment biology text book written by a group of intelligent design supporters and published in 2007.
Its promoters describe it as aimed at helping educators and students to
discuss “the controversial aspects of evolutionary theory that are
discussed openly in scientific books and journals but which are not
widely reported in textbooks.” As one of the Discovery Institute intelligent design campaigns to “teach the controversy” it aims to provide a “lawsuit-proof” way of attacking evolution and implying creationism / intelligent design without being explicit.