Well, this was an unusual circumstance. We stayed one night in a Salen Hotel, and then crossed over to Mull and  stayed in another Salen Hotel (in Salen on the Isle of Mull)! I wonder how much confusion that causes.

We sauntered down to breakfast and met a bunch of cyclists all togged up in cycling clobber just finishing their breakfast. We lingered on after they’d departed in the general direction of Ardnamurchan. The game plan for the day was to ride into Ardnamurchan as far as Kilchoan, where we’d catch the ferry across to Tobermory, and then cycle down to the other Salen Hotel, about 10 or 11 miles from Tobermory.

Pretty quickly we were reacquainted with the tough nature of the road into Ardnamurchan. It just keeps going up and down relentlessly, with no opportunity to get into a climbing rhythm. And some of the climbs are really quite vicious – I had to try to predict exactly how low a gear I’d need, and sometimes I got it quite wrong. On the plus side, the scenery is absolutely stunning, with lots of deciduous and mixed woodland. We passed through Glenborrodale, which has a large house – apparently a restaurant, though it was closed for a function, and on past a new distillery. This was the Ardnamurchan Distillery, and we’d heard it being discussed in the hotel bar the previous evening – it’s so new that it’s product hasn’t aged long enough to earn the description of ‘whisky’!

Eventually the road came out by a lovely bay with fields in it, and the road turned upwards – unfortunately now on bare hillsides, presumably due to the sheep. This climb was really good, since it was a long and steady whih came as something of a relief. Of course the road continued to be single track, which did have me worried at times as there wasn’t any barrier to stop us tumbling down the hillside if a passing car were to force us off the road. It was about now that Carol started worrying we wouldn’t make the ferry we were after. As usual, I had a reasonable memory of the road ahead, and was doing calculations that suggested we would indeed make it. Not that I was able to convince my stoker.

Once over the top of the hill, we had a lovely roar down towards Kilchoan, disrupted by cars wanting to hurry past towards the ferry. I don’t think they quite realised we were going just about as fast as them! In the end, we arrived at the ferry jetty as the ferry was arriving. The cyclists we’d seen at breakfast were waiting for the same ferry. This particular crossing was pretty full, and the only place for our tandem was leaning against the ramp!

After a quick crossing of the Sound of Mull, we rolled our bike off into Tobermory. Tobermory is a delightful and beautiful town. It attracts many visitors not only because of the picturesque harbour front, but because it was used as the basis for the Balamory childrens’ TV series. 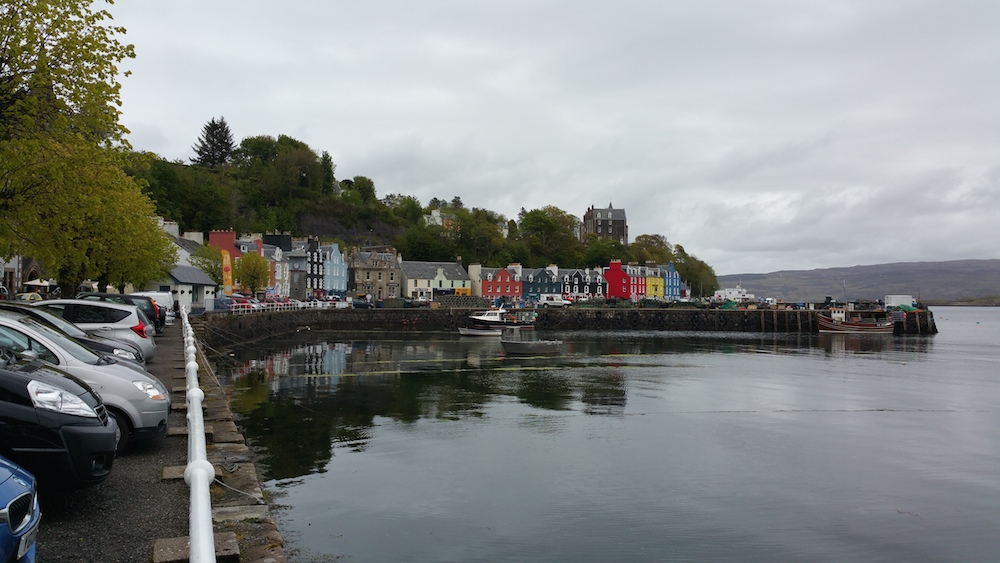 The pretty harbour front in Tobermory

However, it always seems to me that it’s full of people visiting who wander around aimlessly looking for something to do! The town itself is one of those places developed as a fishing harbour for the herring fisheries – just as the case for Ullapool, most of the houses are on top of the hill behind the harbour, reached by astoundingly steep roads, of which more later.

We visited a cafe for a cappucino and cake, then wandered over to the Tobermory Chocolate Factory to buy some presents. We visited the famous fish and chip trailer in the harbour and shared scallops and chips (very good, too!). Then we decided we should press on. We tried cycling up the main road out of Tobermory, a fearsomely steep road. Unfortunately, the arduous cycling of the preceding day, and the ride through Ardnamurchan had taken their toll, and by the time we were halfway up, we were riding at about 2.5mph. This had the effect of wobbling quite a bit, which felt rather unsafe with the volume of traffic squeezing past, so we dismounted and pushed the last few metres to the top.

Remounting, we road onwards towards Salen. This is largely single track, with aggressive drivers, so it wasn’t the nicest ride of the trip. Salen’s a small place with some B&Bs, the hotel we were aiming for, and an Italian restaurant, Mediterranea. I am sorry to say that we were so replete that we didn’t eat out that evening, so Mediterranea remains somethign to try in the future.  We checked into the hotel, got cleaned up and went for a walk, seeing a stag in someones’s garden, and some picturesque broken down old boats. 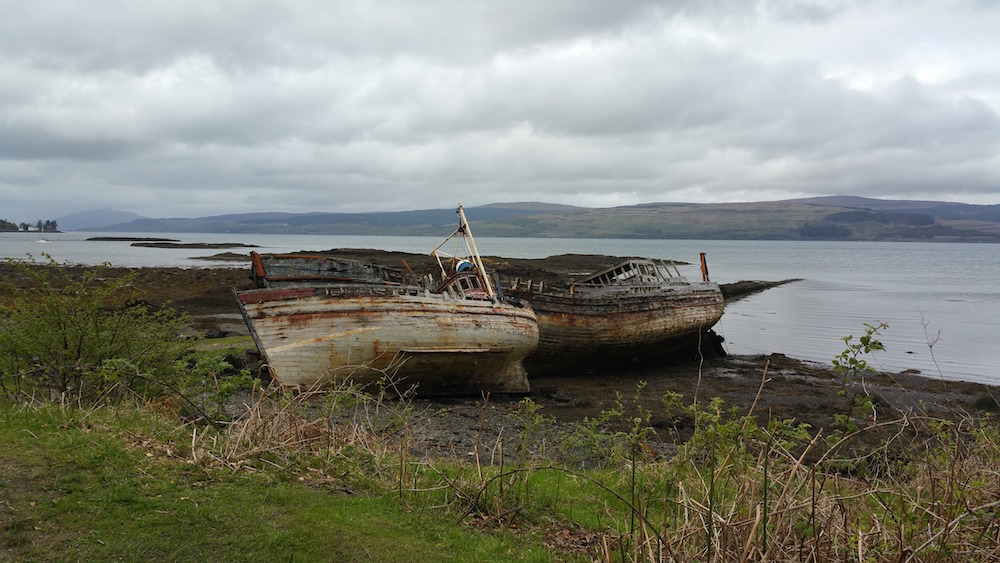 Once back at the hotel, we had a beer and retired for the night. The hotel itself is one of those rather run down, past their best Scottish hotels that I’m so fond of. It was clean and quite confortable – I liked it, particularly since it had a bath as well as a shower!