The next morning, we got up early to go down to the ferry terminal to catch a 7.30am ferry to Uig. The weather forecast for Skye was for light rain from 1pm and heavy from 4pm, so were quite pleased we had an early start. We ended up queuing for ages to get on the ferry and in fact were last on. There were several articulated lorries and an enormous military crane on the ferry – we were quite astonished by the capacity of the ferry.

Having got rather cold standing around at the harbour, we were a bit dismayed to find it was quite cool on the ferry. However, it was a nice smooth crossing. We stopped at a couple of shops in Uig for snack bars, but found them a bit lacking in that regard. It remained pretty cold all day, even when battling up some of the lengthy climbs.

Eventually we stopped by a forest park to modify my clothing choice – in a bizarre fit of optimism I’d started the day with shorts and kneewarmers, and I decided I wanted my thermal bibtights on again!  We pressed on, stopping only near River Snizort to get the Trangia out and brew up a cuppa and to eat the scones and croissants we’d brought with us from breakfast. 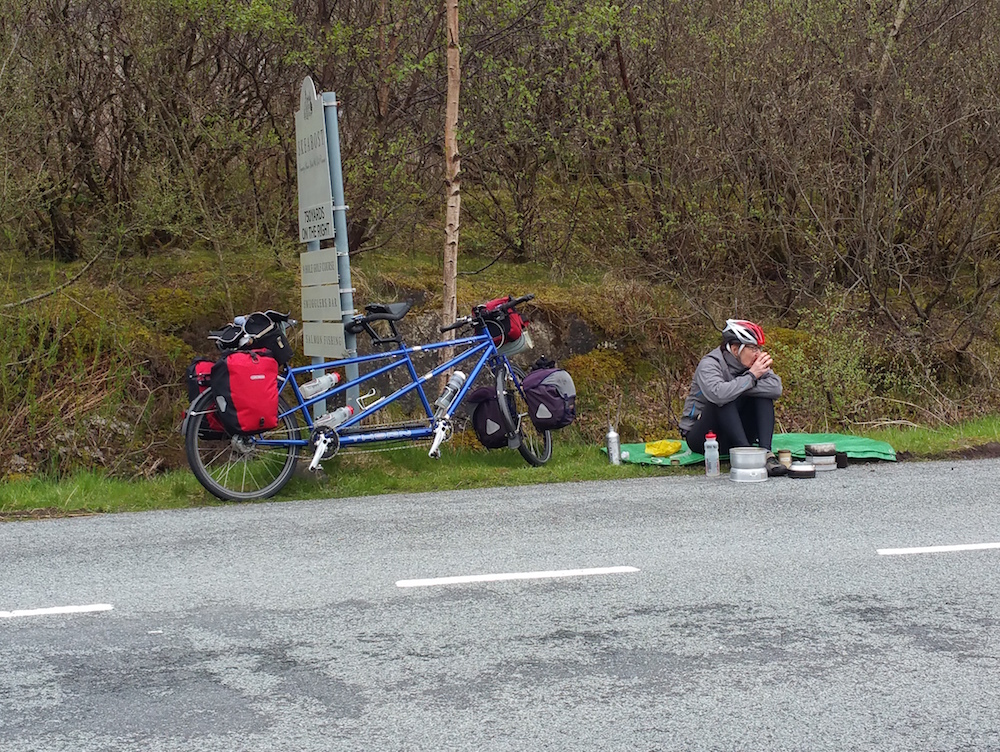 Second breakfast in a layby!

On the move again, and the strengthening wind made climbs rather tough. We’d originally planned to go down to visit Dunvegan and in particular Dunvegan Castle and grounds. However, the low temperature and the light rain that had begun to fall dissuaded us, and we just road up to the Lochbay B&B, which we reached at about 1.30pm. Fortunately, there was someone there to let us in!

The B&B is really great – we’d stayed there the previous year – with a really friendly guy running it. At about 5pm, we were about to set off to walk to the Stein Inn (we had a dinner reservation at 6pm at the Lochbay Seafood Restaurant), and he said he’d drive us down there. Not only that he said we should get the lady at Lochbay Seafood restaurant to call him when we needed a lift back!

For dinner, I had skate wing with capers for starter, halibut for main course and citron cake for dessert. Carol had a rather more adventurous starter: salmon with halloumi (reportedly a particularly good starter) followed by grey mullet for main course and finally panna cotta for dessert. The evening continued to be very windy and wet, so of course we took advantage of the offer of a lift back to the B&B!