As advised, we had breakfast at 7.30am – and an excellent fry-up! The coach party appeared at about 8am, and seemed very jolly. Some asked if we were the tandemists they’d seen the previous evening. We’d made no real plans for the day’s cycling (and indeed I’d expected a relatively low mileage for the first day), so we plumped for a ride down to Vatersay to start with. We packed some food and the Trangia into the saddlebag, hoping to have a picnic lunch later on. After a few false starts (due to forgetting things such as the toolkit), we finally set off.

It was quite sunny, but also rather windy and quite cold. In fact it was sufficiently cool that we both used quite a bit of clothing. Over the years, I’ve tended towards using my regular racing clothing, and this year was no exception: I was pretty much Castelli’d up, with my new Gabba jacket, thermal bib tights and full-fingered gloves. The Gabba turned out to be an excellent choice, it’s wind-proof and breathable, and can shrug off light rain. For those more persistent rain showers later in the tour, I switched to my Goretex jacket. We could see chunks of weather heaving up towards the island, but during the day we didn’t have any prolonged rain, just a couple of showers.

We started by riding back towards Castlebay, then turning down the Nask road towards Vatersay. En route, we saw the wreckage of the wartime Catalina seaplane that we’d seen on a previous trip. There’s a bit of a steep climb before descending to the Vatersay causeway. This causeway was only completed in 1991. It’s quite short and is supposed to have been built following the drowning not of people but of a prize bull named Bernie being moved to Barra by swimming.

Once on Vatersay, the main sight is the astonishing beaches (there is a broch, but not so obvious to find). On the east facing side of a spit of sand dunes is a gloriously sandy beach with calm and very blue water. When we clambered up on the dunes to look west, we were buffeted by Atlantic winds! The west facing beach is much pebblier, with waves coming in fast. 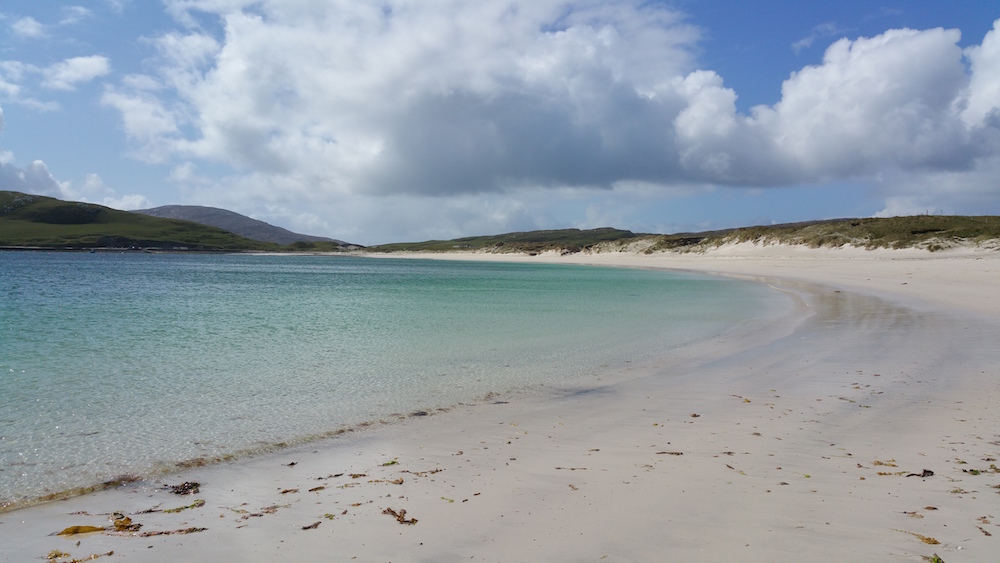 The east-facing beach at Vatersay 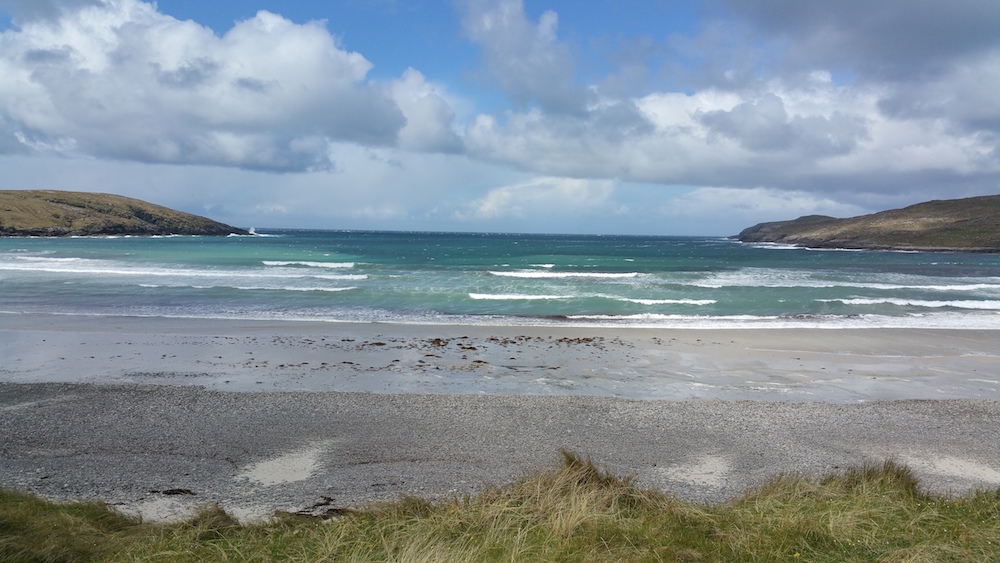 The west-facing beach at Vatersay

Nearby is a memorial to the ship Annie Jane, which sank in 1853 with the loss of 350 lives during a fierce storm. It was conveying emigrants to their new lives in Canada. The memorial isn’t terribly exciting to see…

The Annie Jane memorial on Vatersay

We spent some time walking on the beach admiring the bright blue sea and the silvery expanse of sand. A number of sea kayakers appeared in the bay and landed, unpacking a considerable amount of kit – we assume they were to be collected by road transport.

We then headed back stopping for lunch in the foundations of old building obviously used for shelter by sheep, judging by the copious turds. Once we got the Trangia lit (which was a challenge given the poor state of our matches) we had a sachet of curry on basmati rice for lunch. 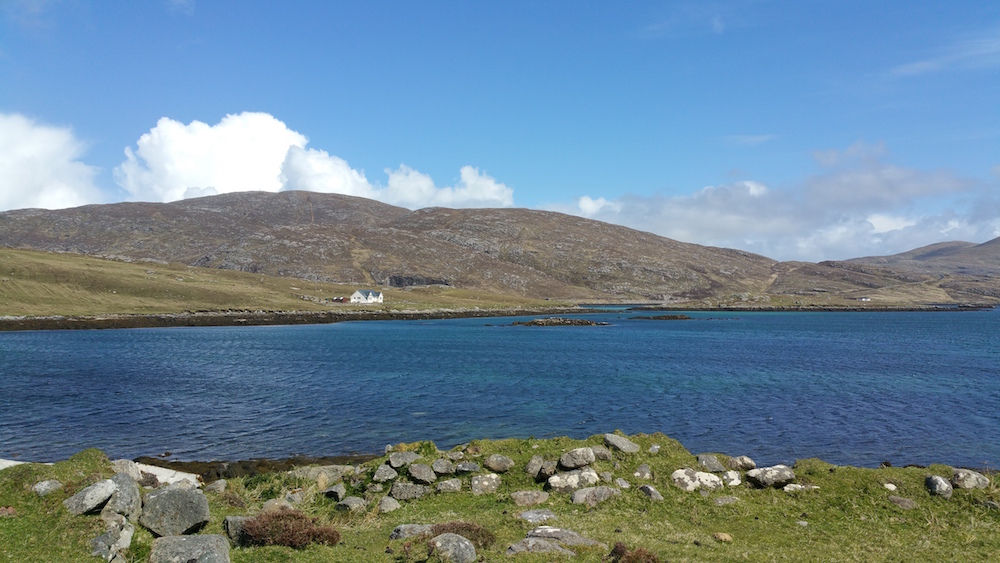 The view from our lunch spot 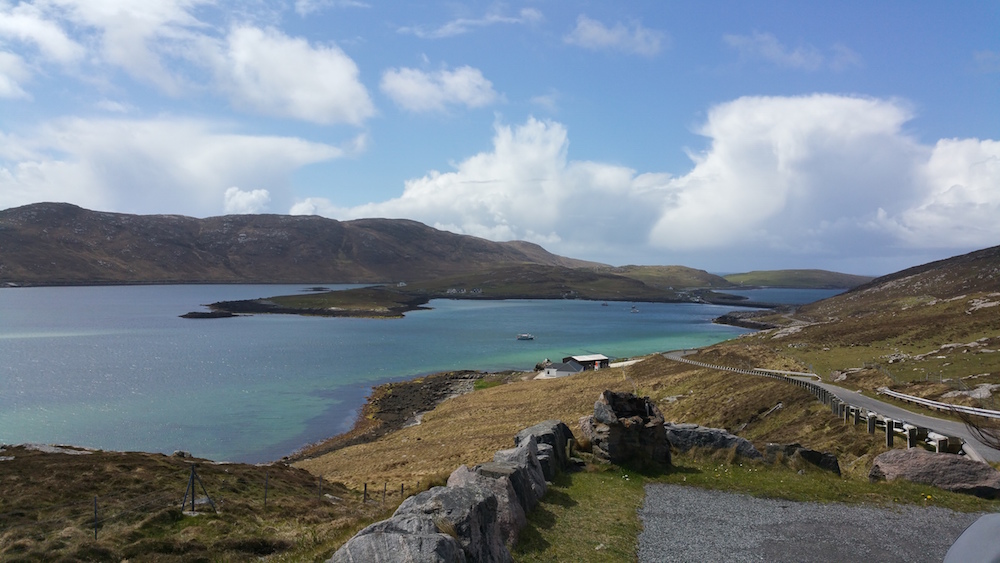 Looking back to Vatersay on the claimb back to Barra

Then it was back to Castlebay. Just as we came out on the main circuit road and turned right for Castlebay, Carol spotted an emu (or maybe an ostrich) in a field! Quite bizarre – after a spot of shopping at the Co-op we passed by again for another look. (Just in case you think we hallucinated the vision of an emu, see this blog entry!) We went to the Co-op for cigarette lighters which are a bit more reliable than matches when lighting the Trangia in damp conditions, and some choco-milk – which is our beverage of choice while touring.  I also bought some shoelaces at the bike hire place nearby.

Then we rode back up to the hotel, and past a strange culvert wall that seemed to be built out of stacked scallop shells. We paused at the hotel to decide what we’d do next. In the end, we rode round the circuit road round Barra. We’d wanted to see the plane coming in to land at the famous cockle strand airport, but we saw the plane come in while we were still some distance away.

Riding round the island, one suddenly comes to a short stretch of forest nestled in a valley. This comes as  a bit of a shock, since the rest of the island is pretty much tree-less. Despite this, we’d been hearing cuckoos all day. Further round the road, we paused atop a hill to swig a bottle of choco-milk. At this point the coach party came by, waving at us! We later found they’d been round the island twice.

Before dinner, we popped into the bar – Carol had a glass of white wine, while I had a bottle of DarkNESS beer, from the Loch Ness Brewery. It’s said to have “rich coffee and chocolate flavours with a long bitter finish” – and I’d pretty much agree with that. For dinner, I had cockles cooked in leeks and beer for starter, followed by scallops on Stornoway black pudding. Carol went without a starter, and had salmon on creamy fish sauce with cockles & mussels, followed by raspberry cranachan cheesecake. We were really pleased with our meal. The atmosphere in the restaurant was really jolly, thanks to the staff and the coach party!

And so to bed.