We had another cooked breakfast, but this time we got to eat our breakfast  while watching a sea otter breakfasting on crabs! (The breakfast room had a huge bay window looking out onto rocks and the sea, and was equipped with a telescope). Apparently British ‘sea otters’ are actually the same species as the freshwater otters, as opposed to the distinct sea otter species found in America.

Once we were all packed, we set off for Armadale. Carol was still feeling a bit groggy with the cold she’d picked up somewhere en route, and I was feeling like I had (probably inevitably) caught it too.

We left Broadford feeling reasonably OK, and rode across the road through bare hillside, then down into and up out of lovely wooded areas – we could hear cuckoos. We kept an eye out for sea otters, though the patterns of the last 20 years in which we had never seen one reasserted themselves after this morning’s triumph!

Arriving at Armadale in plenty of time for the Mallaig ferry, I sat in a cloud of DEET in the outdoor seats of the cafe talking to a succession of people who one by one got beaten of by the midgies. I fed crumbs to an astonishingly tame robin. The crossing is pretty quick, around 40 minutes, and when we arrived at Mallaig I popped into the ticket desk and bought a second Hopscotch ticket (for Lochaline-Fishnish and Craignure-Oban).

On up the road, and we set about the succession of climbs and descent with some resignation. The good weather was seemingly about to revert to showers. We stopped in a layby to heat up some food and coffee/tea, but couldn’t linger as the rain began, and the midgies attacked. By the right turn at Lochailort, the rain had become rather persistent, and would continue like this as we rode along the side of Loch Ailort itself. 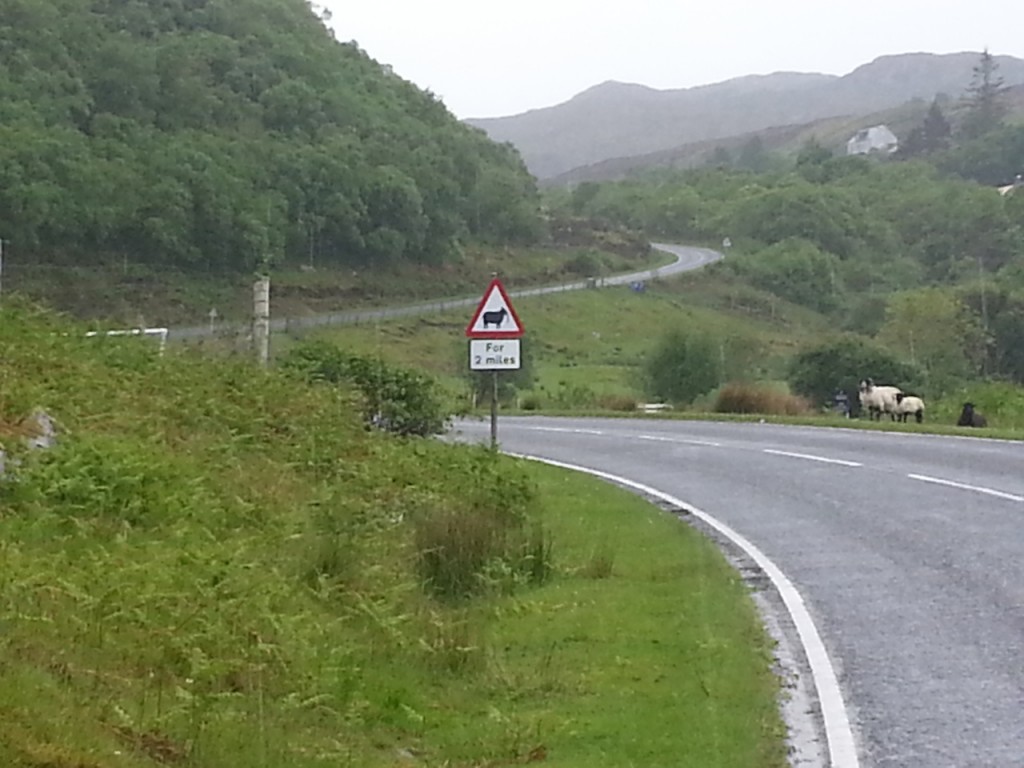 My favourite road sign – “Watch out for elephants on the road”

At the end of the loch, there’s a steep old climb that takes one over to Moidart, where we camped on out first ever cycle touring trip (just a weekend trip).

A few more hills, and we reached Acharacle, which lies is a delightful and lush area bounded by hills. By this time the weather had eased a bit, so we were actually quite dry when we checked into the Loch Shiel Hotel. This two star hotel is just under new management, and is very cheerfully staffed,with quite a bit of renovation work ongoing.

We drank beers in the bar (chatted to a bloke from Barra who’d tried to set up a campsite in Barra only to have several successive caravans blow to pieces), and had dinner.

Since it was tipping it down most of the day, I took only a few photographs.