This was to be the longest day’s mileage – around 68 miles. I’d phoned the previous evening to book a double at the Strathcarron Hotel, so at least we knew we had somewhere to stay. After breakfast, we set off from Ullapool, along a whole series of tough old climbs with the road running alongside first Loch Broom and the River Broom. Actually, the road didn’t get at all easy until we’d reached Loch Glascarnoch (very depleted of water after a long dry period). I was concerned about my sore neck, so we stopped every ten or twelve miles to stretch and eat snacks. This section of the day’s cycling was pretty bleak, with no obvious wildlife to be seen bar a few red deer carcases on the road side, and consequently we didn’t take many photographs. 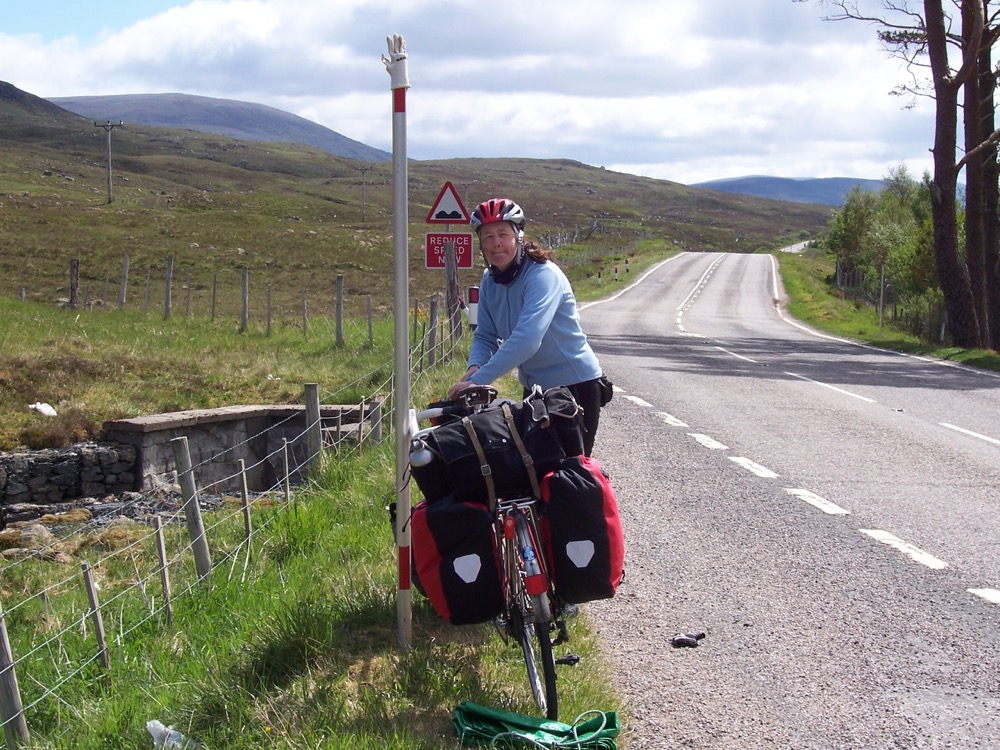 After a snack break. I never noticed the glove on the snow pole!

Mid-way between Loch Glascarnoch and Gorstan (where we were to take a right turn towards Lochcarron), we stopped at a hotel with tearoom for tea and scones. It was a rather  eccentric establishiment with a magnificant display of (among other things) commemorative Star Trek plates. The tea and scones were most welcome, but they came at rather an exorbitant price! But at that point in the day, we didn’t have a lot of choice.

From Gorstan, we were on the road to Achnasheen, where we planned to stop for refreshments. The cycling was pretty easy, as we’d picked up a tailwind. The countryside became barer as we proceeded towards Achnasheen, with very little in the way of accommodation (at least that we could see from the road), so we were pleased to have planned ahead.

There’s a gift shop and tea room by the rail station at Achnasheen, where we stopped for a  (very nice) capuccino. We also admired some motorcycles being refurbished ouside! Actually, from past experience, they do a rather nice smoked venison salad. But we didn’t linger, and set out on the final 21 mile leg to Strathcarron.

From Achnasheen, the road rises through bare landscape, then descends to more wooded countryside as it approaches Loch Carron. At times we were exceeding 30 mph, though the road reverts to singletrack in places – causing me to be a bit more cautious.

We arrived at the Strathcarron Hotel at about 4.30, to a warm welcome. After cleaning up a bit, we had a beer (Red Cuillin), before retiring to our room to plan the last two nights’ accommodation in Mallaig and Strontian. We’d decided to stay at a B&B  in Mallaig where we’d stayed on an earlier trip, and quickly arranged a booking there. Strontian was a bit more trouble, and it wasn’t until the third phone call that we identified a B&B with rooms available. Still, that was us sorted for the remaining nights.

After that, a rather good dinner in the bar – monkfish and salmon kebab washed down with McEwans 80/-, followed by crannachan.

Strathcarron Hotel. Very comfortable, our room had a bath rather than a shower, which was much appreciated. A bar with good beer and food, breakfast very good.