Most of my ‘serious’ and focussed training is done in the garage on a turbo trainer – the time available to me for training is quite limited, and consequently I train before going to work, so usually around 6am. I therefore use the turbo trainer all year round. For the last few years, I’ve been using the iOS app Motivo to manage my turbo training sessions. Unfortunately, I’d recently been having trouble pairing my ANT HR strap to it (and occasionally this problem affected any of my devices). Whether this reflected a problem with my iPad ANT adapter, I’m not sure. In any event, TrainerRoad appeared a bit more robust in this regard. It hadn’t escaped me that TrainerRoad also features turbo trainer control via ANT_ FE-C.

My primary indoor turbo trainer over the last 20 years has been a Cateye Cycle Simulator CS1000. This is a pretty solid device which was very stable in use, and lasted me well. It got rather rusty, the head unit failed, the fan cover broke, the head unit fell off, the variable magnetic load got stuck, and finally the bearings sounded a bit shot (given the amount of use, this thing lasted very well indeed). So I figured I’d buy a new turbo trainer. Looking around, I had to decide whether I’d stick with a ‘dumb’ turbo, or upgrade to one of the increasingly ‘smart’ turbos now available. Also, whether I go for one of the newer ‘wheel-out’ turbos or stick with one that left the rear wheel in place with the tyre against a roller.

After a bit of thought, I decided to go seriously upmarket. After all, I do spend a lot of time on the turbo and as I mentioned, it’s where I do most of my training. I therefore looked at trainers such as the Tacx Neo and the Wahoo Kickr and decided to go for the Tacx Neo, which was subject to a bit of a reduction at Wiggle (plus I got a further reduction as a frequent customer). I reckoned that if The Tacx lasts as long as the Cateye, it won’t have been a major expense. The DC Rainmaker blog was invaluable for this decision – see his latest review of indoor trainers, his detailed review of the Tacx Neo, and his explanation of ANT FE-C.

In due course, a massive and very heavy box arrived from Wiggle. I humphed the thing into the garage and began to unpack it. As well as the turbo trainer itself, there’s a front wheel riser block, a power supply, a skewer and a cassette lock ring and spacer set. The bike I’m currently training on is an old retired steel TT frame, running 9 speed Shimano transmission, so I whipped off the cassette and installed that on the Tacx freehub, which is made by Edco and can take cassettes with Shimano or Campagnolo splines. It’s a little fiddly as the splines aren’t as obvious as on a true Shimano or Campagnolo freehub body, but it’s not difficult. I have both Shimano and Campagnolo lockring tools in my toolkit, so no problems there. 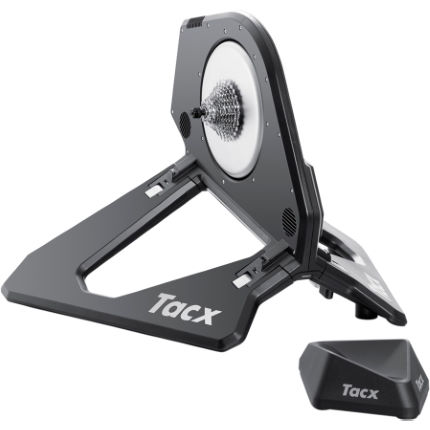 Once the side arms/wings are unfolded and locked into place, the turbo has a rather SF-style appearance, a bit like a TIE fighter designed by Batman. Its weird appearance is enhanced during use by the unearthly glow it emits from its underside – blue at light intensity, purple at intermediate intensity and deep red when you’re absolutely hammering it. Structurally, it seems very robust, though the outer shell is some kind of plastic. 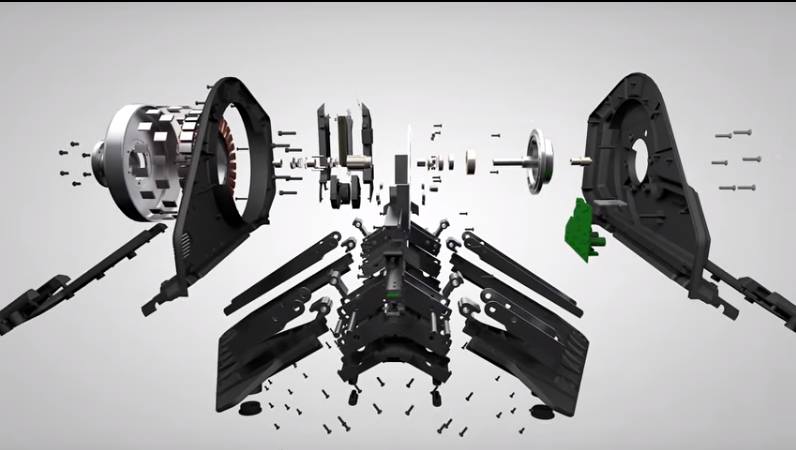 Here’s a picture showing all the bits inside a Tacx Neo. No flywheel!

Fitting a bike to the turbo is very easy though I find bikes with rear facing dropouts such as my Cervelos are more of a hassle and you can get a bit oily. For the most part, this isn’t an issue for me, since I leave the training bike mounted to the turbo, and I’m not going to cart the Neo off to races for warmups on anything like a regular basis. 22kg of turbo in and out of the car is likely to give me back issues! The supplied skewer works well, and the bike when mounted seems very secure. Interestingly, and in contrast to the traditional turbo trainers I’ve used in the past, the bike mounted on the Tacx Neo can lean a bit from side to side, which is a little disconcerting at first but eventually feels a bit more like riding a bike for real. The original model, which I have, has rather tight clearances against the more exotic carbon frames (typical of TT bikes), and the Neo has been modified for 2017 to give a bit more clearance, though the internals are unchanged. My Cervelo P5 does fit. Just. I know this because somewhat unbelievably I carted this behemoth of a turbo trainer all the way to Normandy to warm up prior to the 2016 Duo Normand!

There are Android and iOS apps available on the respective app stores which enable firmware updates and so forth. The Tacx Neo doesn’t require calibration. In use, the Neo is very quiet, with most of the noise coming from the drive train. I have almost exclusively used it in Erg mode, with resistance controlled by TrainerRoad. I found this a bit disconcerting at first. I’m used to easing off a bit as I tire during a training session, but with the Neo, the cadence just drops away while the head is maintained. So, the first lesson is not to overface yourself with an over-ambitious interval session.

Cons – first generation casing doesn’t accomodate all frames (my P5 fits (just!); very heavy – at around 22kg, you need to think carefully about taking it with you for warmup!