I have posted before now about the excellent Squeezebox streaming audio system from Logitech that is sadly now discontinued. Since Logitech knocked their line of Squeezebox players on the head, the system seems to continue flourishing, thanks to the open source nature of the server software. Most recently, the BBC decided to implement a very poorly publicised change to the internet streams of live and listen again radio programmes (see, for example, this blog post).  Within days users of the Logitech Server had access to these streams restored, thanks to the efforts of developers who post on the forums. In contrast, users of just about every internet radio on the market and other streaming systems such as Sonos have to make do with pretty low resolution mp3 streams (and these are not a long term solution).

At the moment, I am running a Squeezebox Touch and two Squeezebox Radios in my network, with an old Squeezebox 3 held in reserve. I also have three Raspberry Pi computers set up with piCorePlayer as Squeezebox players, and can stream via several apps on iPads and Android devices. So, all in all, a very versatile system, that Logitech should be ashamed of failing to support properly. Anyway, enough grumbling. Here’s a neat little mini HiFi I’ve just set up – ultimately for use in my office. 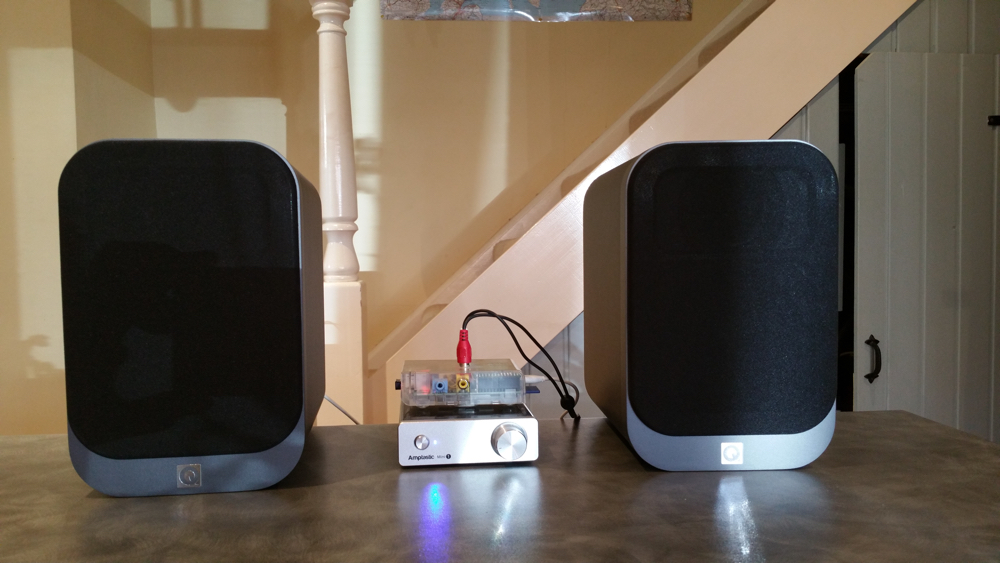 A new, and very tiny, Squeezebox based HiFi

This uses a Raspberry Pi model B, fitted with a HiFiBerry Dac, connected to an Amptastic Mini-1 amplifier. The Mini-1  is seriously tiny, with a footprint smaller than a CD jewel case. I’ve just added a pair of QAcoustics bookshelf speakers. The whole shebang sounds pretty good for the price of around £300. In the office, I may well be using an old 1st gen iPad to stream music either from Spotify or via a VPN link from my home music server, rather than the Raspberry Pi.