This event was a re-run of the VTTA men’s ’25’ championship originally run earlier in the season. the event had to be abandoned due to extraordinarily heavy rain mid-way through the event. Talking to riders, it sounds like conditions hd been truly foul with standing water many inches deep in places.  For some reason, the rescheduled event was being held as a morning event – most E2/25 races are afternoon events. This brought with it transport issues. I travelled over with Katja, leaving at about 5am. I thought it prudent to set the alarm on my watch, but unfortunately messed up the watch’s setting, so I was woken at 4am, but French time. I found myself awake an hour earlier than I needed to be. Oh well.

It was a pretty cold morning, around 8 degrees when we started, and there was a rising wind from the west. Westerly winds aren’t usually the best thing for events on the E2/25, so while I remained a bit optimistic about the event, I wasn’t really sure how it would go. The E2/25 isn’t a course I ride terribly frequently. It uses major dual carriageways, the A14 and the A11, but actually feels pretty safe because there aren’t many slip roads, and the roads are pretty wide.

I confess to not warming up well – this was mostly due to the fact it was so cold. However, I shot down the slip road onto the A14 and find myself going well at about 29mph. Alas, this wasn’t to last as I soon found myself exposed to the breeze. I felt really pretty awful on the outward leg, with my speed dropping each time the road sloped gently up. Bearing in mind the undulations on the course are not exactly steep, this was rather disappointing, and I began to worry about the outcome. By the time I reached the turn, I was feeling quite despondent. I’d tried dropping my gears to find a higher cadence, but each time I did this, my speed fell further so I kept the gears high. 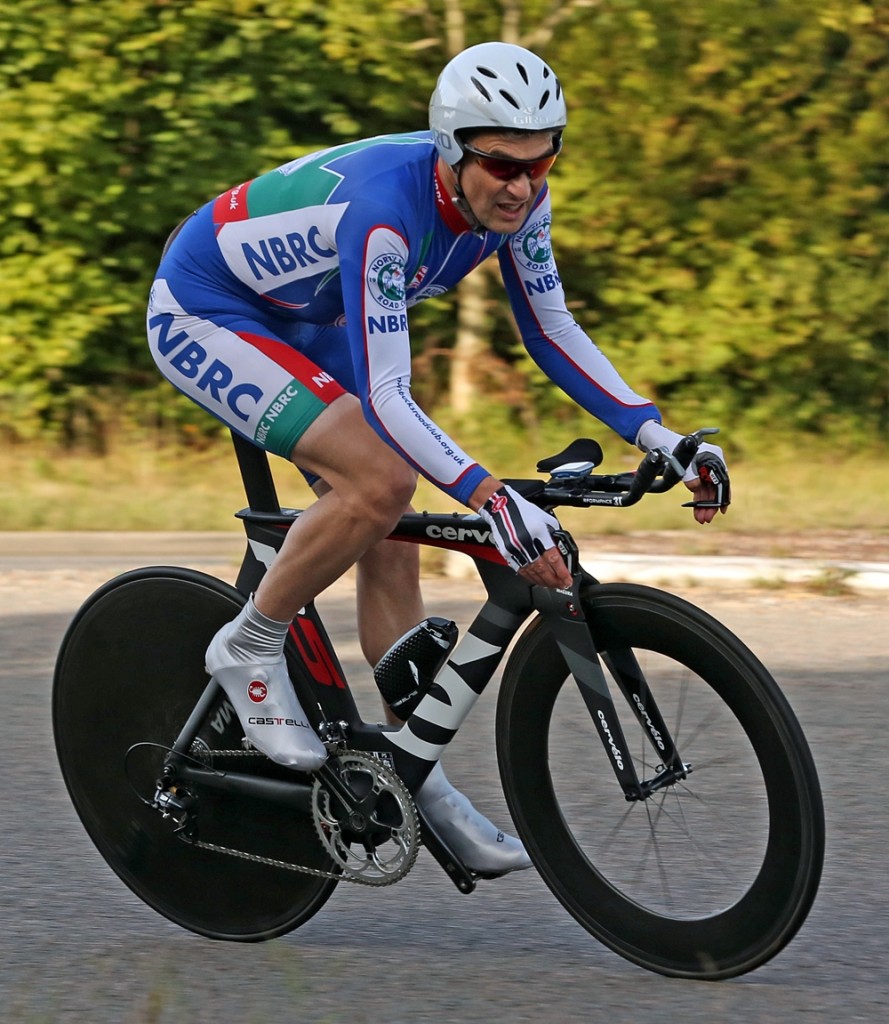 At the turn, I spotted Davey Jones out there photographing riders – I think he was sat in a position to grab photos as riders approached the slip road back down to the dual carriageway.

The return leg was (thankfully) quite a bit quicker, as the wind was assisting us. I found myself clocking along at more than 30mph at times. Sadly this didn’t compensate for the toughness of the outbound leg, and I finished with 56:40. This was good enough for 30th place out of 118 finishers on actual time, though as I’m not a VTTA member, no result on standard for me!

I think it says something about my late season build up of form that I was disappointed with 56:40, back in May this would have seemed an unlikely performance. Perhaps this is a good sign!