A sunny but breezy morning saw a field of around 80 riders signed up for this event, possibly the last that will be held on the F1/25, owing to the impending installation of traffic lights at the famous Black Cat roundabout.

It was pretty clear while warming up that the southbound legs of the event were going to be the most challenging, and so it proved.
Just after starting, as I was riding up the drag to the Tempsford flyover, someone (evidently warming up and with a later number then me) pulled out of a side road, causing me to have to deviate from my path. This was a bit annoying, and also a bit uncalled for! But no serious damage caused. Once over the flyover, I raced down the slip road to the A1, and found the going quite tough, due to the headwind. There was some unfortunate on the roadside who’d evidently had a mechanical – he was wiping his hands on grass as I passed. I circled the Sandy roundabout, and as soon as I set out northbound, things felt pretty good. The bloke on the roadside was still fiddling with his bike, so presumably it was race over for him. For the northbound leg, I was cruising along faster than 30 mph a lot of the time, with serious doubts about how easy the return leg would be.

Once round the Buckden turn, things got a bit more interesting, with the nagging headwind threatening to derail my efforts. Bizarrely, my speed seemed to fluctuate quite a bit, with some sections being quite quick (probably a combination of descent and shelter from the headwind), while others were a bit slower. Unfortunately, the latter predominated. 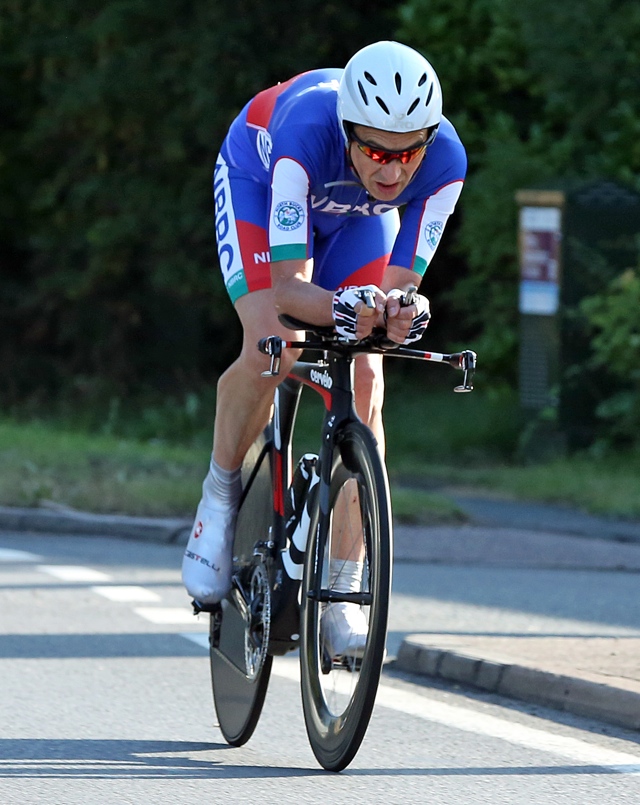 At the Black Cat, the road surface leaves a lot to be desired – I dodged the curved tarmac trench that threatened to dictate my passage through the roundabout, and emerged in good style on the other side, with rather less than two miles to go. I grit my teeth and tried my damnedest to keep some speed up until I reached the line.

I finished in 56:34, good enough for 12th place. With the 2014 Duo Normand in less than two months from now, it seems my form is finally beginning to surface.

Here are the top 12 finishers (full results can be found at the CTT website):