The F2A/10 is on the A428 dual carriageway, with a turn at Caxton Gibbet. It’s a bit of an exposed course, and in my experience is a bit susceptible to the effects of a windy day. And so it proved.

Tony and I went over not quite knowing what to expect – in Tony’s case because this was his first event in 2014, and in my case because my training has a bit off the boil since before my last open event (the EC Cycles ’10’ in March).

On the day, it was a reasonable temperature, the rain held off, but there was a significant crosswind out there on the course, which I found made my front trispoke a bit twitchy. I don’t know whether this is merely age-related caution or nerves, but I’m pretty sure I never used to find crosswinds so much hassle is the past. That, together with a close pass from a high speed car, made me rather unwilling to give it ‘full welly’!

The initial couple of miles seemed to be slightly uphill, and I struggled to keep a decent speed up. Once over that, I had a reasonably straightforward ride, with little hassle from traffic, even at the turn roundabout. After the finish, I looked down and saw my rear wheel rubbing against the frame. This is a bit annoying – the little screw that’s supposed to prevent this is bent – and the placing of the disc wheel is difficult at the best of times because its profile doesn’t leave a lot of clearance at the chainstays.

I finished with 22:54 – a little slower than my 22:47 at the EC Cycles ’10’ – a ride on a course with a similar profile but in much nicer conditions. So that’s encouraging at least.
Other points of note, numerous dead badgers on the course gave it a rather gruesome appearance!

Davey Jones was out on the course taking pictures! 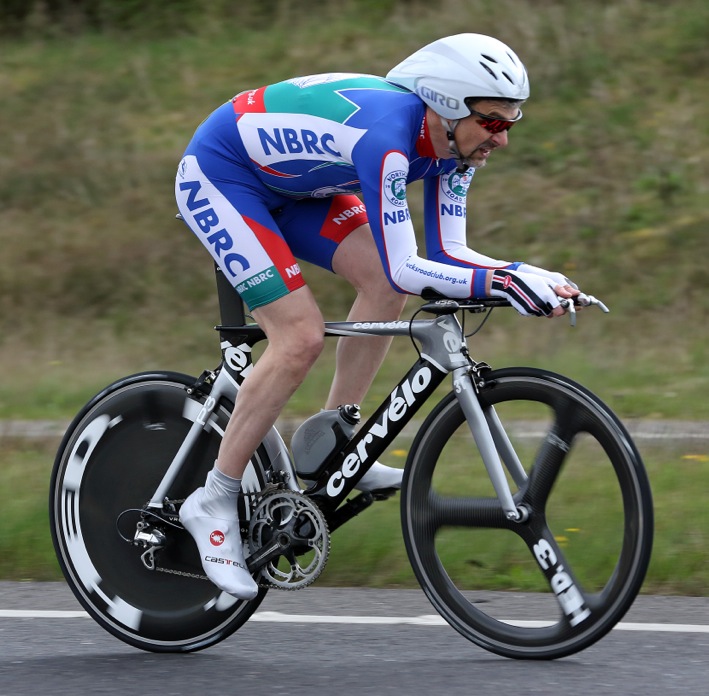