Way back in late November, Apple announced that some first generation iPod Nano models had defective batteries that represented a hazard, and that they had instituted a replacement programme. Visiting the website revealed that mine was one of those to be replaced. My Nano hadn’t really been used much since I got an iPod Touch (now replaced with a Cowon X7), but I requested the return package, and in due course posted the iPod off to Apple.

Much discussion ensued as to what the device would be replaced with.  Some web sources implied Apple were replacing the defective units with refurbished first generation devices, other that the replacement units would be more recent models.

My replacement was delivered yesterday, and 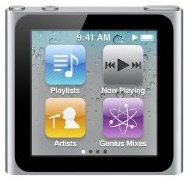 I can confirm that Apple have replaced my 1st gen 2Gb Nano (left) with a 6th gen 8Gb Nano (right).

I’ve not really kept up with the evolution of iPods, and frankly I’m astonished by this little device.  And it is little.  At first sight it seems little bigger than the sync cable plug.  Despite its size, it still has a battery capable of [up to] 24h music playback (according to Apple) and an accelerometer so tracks can be changed by shaking it.  It has a number of apps installed including a clock, meaning it can be used as a watch if it’s clipped to a strap.  It has a radio, which uses the headphone cable as an aerial.  There’s no navigation dial, but the touch screen is pretty intuitive and easy to use (in fact after years of iPod Touch and iPad use, I don’t find the iPod classic control dial particularly easy).

All in all, I’m rather pleased.  Even though this is another device that uses iTunes.

Update: I was curious as to how Apple managed to shoehorn all this stuff inside such a small case. iFixit has an interesting iPod Nano 6th Generation Teardown.

Planning the winter training for the 2010 season…