On the back of a frankly lacklustre season, we (Team Grumpy, a.k.a Gerry and Robert) were uncertain how things would go for them at the 2011 edition of the Duo Normand, the 30th time the event has been run (and the 8th in which Team Grumpy has competed).

As usual, signing on was a bunfight in a large marquee in the centre of Marigny. On the day, we successfully dodged some quite heavy showers by decamping to the Sport Bar for a coffee while we waited out the worst of the showers. At signing one, we received a bigger than usual goodie bag, including a 30th Duo Normand woolly hat (which I nabbed) and a 30th Duo Normand woolly scarf (nabbed by Gerry). We also got the now-customary name-plate for the car, despite our intention to ride without a supporting car. Then it was back home for a evening of pasta and limited amounts of Leffe.

Clear weather at sunrise soon disappeared at the mercy of oncoming cloud and wind – we looked apprehensively upwards and saw signs that the forecast of heavy showers might well be accurate. The team drove over to Marigny under darkening skies and rising winds, arriving in time to wander down to the start ramp to watch some of the non-licence teams start their race. Not much sign of the usual crowds, but it was still early. We did see Lindz Barral and his team mate start, though they seemed to cut their arrival at the start ramp rather fine I thought.

We returned to the car to set up the bikes for a warmup before the scheduled TG start time of 10.41am. Unfortunately, as we rolled away, the rain began. And not some light drizzly sort of rain: this was the real deal of ‘heavens opening’ – made worse by Gerry’s error in leaving his rain jacket back at the cottage some 16 kms away.. Both riders were rapidly drenched.

To make matters even worse, Gerry’s bike developed a ghastly clanking from the bottom bracket area. Despite this sort of thing being a regular part of our annual foray into French racing, we beat a hasty retreat to the team car (the Team Manager actually thought we had decided not to ride), and a raid of my comprehensively equipped toolbox for remedial action was made. Unfortunately, nothing seemed to actually respond to tightening – the Campagnolo UltraTorque chain set seemed to be as tight as a very tight thing. But this did give both riders an opportunity to swap from sunglasses to low light lenses, without which vision would have been difficult at best..

In this really wet and uncomfortable state, we clanked off towards to the start area. By the time we climbed onto the start ramp, we were both shaking uncontrollably with cold and wet. It was actually something of a relief to start the race! Our game plan for the initial kilometres involved Gerry leading the team up the start lane, then for me to take a lengthy spell while Gerry recovered from the gasping induced by his start effort (this seems to be a bit of a regular outcome of the start). In fact I found myself pounding down the bocage lanes at speeds of around 30mph, and, due to volume of precipitation, unable to see further than a couple of metres ahead, with Gerry trying to recuperate from the start effort. 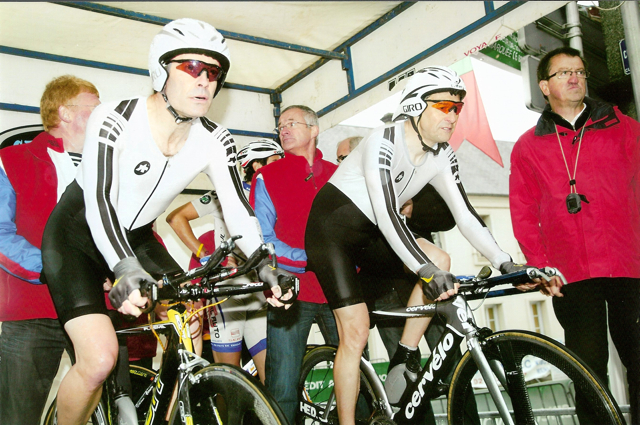 Focussing on the task ahead – “Don’t slip off the start ramp”! 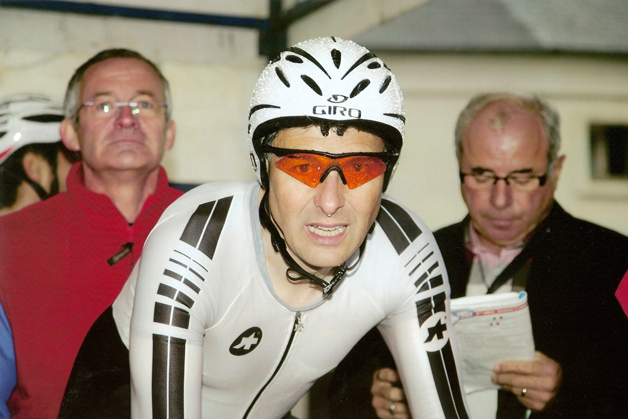 Why am I doing this?

This he did, once we’d reached the first turn, from where we operated rather more as a well-organised team, although (it has to be said) not in our usual neat style. Indeed the quantities of water falling made our cornering rather conservative, and we tended to let modest gaps open up at the sharper bends. These gaps of course needed to be chased down, with consequent strain. The second aspect of the game plan was to capitalise on the faster early kilometres, and trying to hang in there through the hillier sections. As a plan this seemed to fare reasonably well, though the climbs before Marigny are always harder than one remembers. The course was littered with fragments of water-sodden dossards, in some cases ground to a pulpy splurge by car tyres (Team Grumpy prepared their numbers with clear gaffer tape as soon as rain seemed likely, and consequently were one of the few teams in the Corpo category to finish with readable numbers).

By this time we (who as usual were riding without a support car) had experienced more trouble than usual with traffic on the course, and not just support cars, but extraneous vehicles waved onto the course in front of them and, in one instance, a milk tanker. What really took the biscuit was the minor traffic jam experienced while getting through Marigny, followed by the usual traffic jams on the remaining hairpin section of the course during which we found ourselves frequently crossing the mid-line of the road to pass slower teams and their cars.

From Marigny, there’s a final out and home section, with a surprising amount of climbing. Usually, this is where Gerry is strongest, but today the elements had conspired against us – we were both struggling to keep a decent race pace going. At last we crested the hill, and roared off down towards the turn. After what seemed like an eternity (both of us were clearly flagging), Team Grumpy reached the turn and embarked on the final effort to the finish. The finish was reached in a last ditch effort, with the line crossed at 40mph and followed by the usual frantic braking to stop before the barriers.

We finished in second place in the Corporatif category with 1:24:51 (this was 95th fastest of about 320 finishers in the 54.3km course, this includes riders from professionals downwards). It was close thing between us and the third placed team (Finsbury Park CC rider Ian Bibby with Carl Ferri). After a hanging about for the results, getting copies of the trait photos, and eating the now-traditional grilled sausage in baguette with frites, we didn’t stick around long, retiring to the cottage for a well earned Duff beer (a minor aberration from our usual energy drink).

It has to be said that these were the foulest conditions we’ve seen in eight outings at the Duo Normand, and the rain not only made for unpleasant race preparations and packing up, but kept us on our toes looking for potential hazards. Added to that, the usually buzzing atmosphere in Marigny was a bit lacking – nobody seemed keen to hang about longer than necessary.

My month in cycling – January