Yet another palaeontology blog post!  This story roared round the internet just before Christmas (for example the BBC News story), but I found it interesting as a non-specialist in arachnid evolution or palaeontology, partly because of the methods used for extracting fossil arthropod material from the substrate, and partly because it tells a tale of re-examination and reanalysis of specimens with a quite different interpretation. Oh, and there’s a tale of the evolution of silk use by spiders!

Production and use of silk is the defining characteristic of spiders –

modern advanced spiders use silk for a quite astonishing array of purposes (from taking flight to encasing eggs; from capturing prey to constructing shelters), and a single individual may produce silk of several types with distinct properties.  Spider silk is produced from specialised structures called spigots, which are in turn located on modified appendages called spinnerets (see picture on the right, from the arachnology website, where there’s a description of silk production).

Back in the late 80s, fossil material of Attercopus fimbriunguis was considered to provide evidence of advanced silk production: this paper reconsiders that evidence, and compares the original and newer fossil material with other specimens, notably Permarachne novokshonovi (in the picture below), which has a clear flagellum.  As far as I can tell from a reading of this paper (which is replete with terminology I’m unfamiliar with), much of the uncertainty comes from the material worked with – it seems to consist largely of cuticular 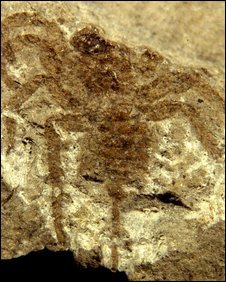 fragments released from maceration of hydrofluoric acid digested rock matrix.  In fact quite a few of the figures resemble the residue from a Drosophila dissection as we might carry out in my lab!  There’s also a rather neat CT scan revealing appendages within the rock matrix of another fossil arachnid.

The structure originally interpreted as a spinneret is most probably a rolled up section of cuticle, a false interpretation arising from the way the specimens are prepared.  On the other hand, the present paper does have a figure (Figure 1 C, D) showing a cuticular fragment bearing what appear to be spigots

To cut  a long story short, the revised interpretation of the A. fimbriunguis material suggests that the spigots are not located on a spinneret, but are actually located on ventral plates of the opisthosoma (the abdominal part of a spider’s body).  This means that the animal would be unlikely to be able to weave webs, and presumably used silk for some other purpose, such as leaving a navigation trail, or nest construction, and that true web-building abilities did not arise until 300 million years ago, some 80 million years later than thought following the origninal interpretation of A. fimbriunguis.  Indeed, the BBC article quotes Paul Selden:

“The puzzle about silk was this: we knew that it wasn’t used for making webs initially, for catching insects, because there were no flying insects when the earliest spiders were around,”

Owing to the odd combination of the silk spigots on ventral tergites, and the possession of a flagellar appendage by Attercopus and Permarachne, Selden and colleagues propose a new Arachnid order: Uraraneida, characterised by these two features,

In the Journals – Selfish Genetic Elements and Polyandry