OLPC to be available in Europe? BBC News has a story that the OLPC (One Laptop per Child) will be available in Europe on a Give 1 Get 1 basis via Amazon.

I’ve written about the OLPC project before – this is the project started by Nicholas Negroponte to develop a low-cost laptop for educational purposes, aiming to produce the devices for $100.  Last I heard, they’d got the cost down to $189. The OPLC runs Sugar  Linux (I have Sugar running under VirtualBox, and it’s a neat and innovative OS), and has a number of innovative technologies, notably in the low power screen which is usable in sunlight, and the dustproof and waterproof keyboard.

The programme has stumbled of late, with competition from Intel, who have produced the Classmate laptops (running Windows) in direct competition, while supposedly working with the OLP project.  In addition to acusations that Intel behaved “interestingly” during their dalliance with the OLPC project, Microsoft have been accused of strong-handed marketing tactics to drive Windows XP into classrooms.  One further issue has been the rise of low cost netbooks, pioneered by the Asus Eee, which completely wrong-footed the Redmond behemoth, who were intent on pushing the resource-hungry Vista.  Now of course, they’ve extended the lifespan of Windows XP.

The OLPC has been previously available as G1G1 offer, though only in the USA.  I’ve long wanted to get one of these things, so maybe this announcement is an opportunity.  So far I’ve not seen any mention of this G1G1 programme at amazon.co.uk, but I’ll keep an eye out. 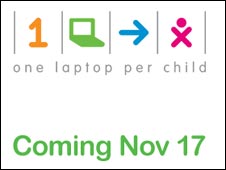 The computer mouse is 40 years old…