Wacky Jacqui and the presumption of guilt 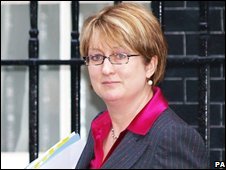 The BBC reports that measures to prevent undesirables gaining access to the UK are to be strengthened, under measures to be introduced by our not-so-libertarian Home Secretary.

At least the plan is to announce who’s on the the list of over 230 individuals considered to be a threat to the UK.   The measures  are as follows:

To create a presumption in favour of exclusion for people who have engaged in fostering, encouraging or spreading extremism and hatred (but what level of proof is required for a government that regards 42 day detention without charge to be a laudable aim?)

To put the burden of proof on individuals to show they have renounced previous extremist views (and here we have a presumption of guilt, don’t we)

To allow for the exclusion of nationals from the European Economic Area before they travel to the UK (…mmm, interesting, presumably this needs her to get the rest of Europe on board)

To allow for the “naming and shaming” of excluded people (Well, at least we’ll know who they are!)

Ms Smith said it would now be up to the individual concerned to prove they would not “stir up tension” in the UK.

Check this site out for a description of three phases of extremist tactics.  It’s a little concerning that my website is pretty much Phase 1 Extremist behaviour.  What have we become where lawful activity can be regarded in this way?

On the plus side, I look forward to ace terrorist George W. Bush being denied a visa in the future.

Government caves in over datasharing proposals