Perhaps I have just taken the wrong career path in science, but I do find the reports of interesting new fossils rather exciting.  And how could I resist a paper describing a “bizarre Jurassic maniraptoran”?  It seems that hardly a week goes by without a striking fossil from China being described.  This one hit the BBC news pages, from where I linked the reconstruction of the animal below.

The first figure here is from the paper (if it doesn’t show, it may be because a subscription is required)  – the big panels shows the beast: a pigeon-sized animal, with clear evidence of feathers.  Much of the taxonomic detail escape me, but it does appear to form a new clade at the base of Avialae (apparently a clade consisting of birds and their most immediate reptilian/dinosaurian relatives).

The nice thing (for the uninformed reader like me) in this fossil is the presence of four long tail feathers, a bit like a pheasant tail (which presumably influenced the reconstruction!).  The animal lacks pennaceous feathers that would be required for flight.  However, in addition to the long tail feathers, there are non shafted feathers, I presume for insulation. 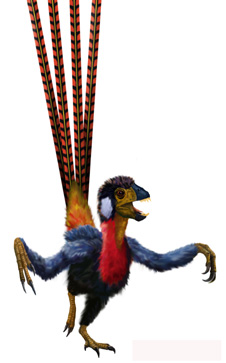 By inference from extant birds, the authors suggest that the long tail feathers (which, incidentally, are incomplete, as the distal parts have been lost) would have been used in some form of behavioural display.  Unless the kind of feathers used in flight have been secondarily lost, this taxon was probably incapable of flight.

Check out the BBC page for several quotes from palaeontologists a lot more expert than I.