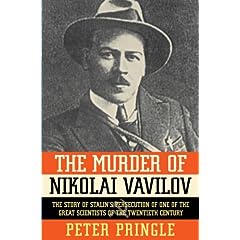 The Murder of Nikolai Vavilov: The Story of Stalin’s Persecution of One of the Great Scientists of the Twentieth Century

The Murder of Nikolai Vavilov is a very readable account, not merely of the death of Vavilov, but of his life. Of course, the main interest is in the battle between Lysenko (and the Lamarkians) and Vavilov (and the geneticists) for control of biological science in the Stalin era Soviet Union.
Ultimately Lysenko triumphed over Vavilov largely because his pseudo-science matched the politics of the era. Also fundamental to Vavilov’s downfall was the extreme paranoia of the State – for ten years informers supplied information on Vavilov’s professional activities. Many of these informers were colleagues and acted for the state for self-preservation.  It’s easy to criticise such activities until one considers what one might do in the same circumstances.
Most harrowing are the details of Vavilov’s interrogation. As with many totalitarian regimes, stupendous quantities of records were kept – much of the official record of Vavilov’s interrogation was used by Pringle in reconstructing the events following his arrest.
Perhaps wisely, detailed discussion of the science is avoided – Pringle keeps this often in the background, preferring to describe Vavilov’s general goals, and the overll political battle.  One interesting and ironic observation that might be made is that Vavilov’s rise to prominence came about not just because of the quality of his science and the extraordinary vigour with which he conducted his science, but also a degree of political patronage

The video press release from the BBSRC