Today was largely dry, though we did get some showers, occasionally quite heavy. We pedalled off south from Waternish and on via the A863 towards Sligachan, aiming for a B&B just beyond Broadford. 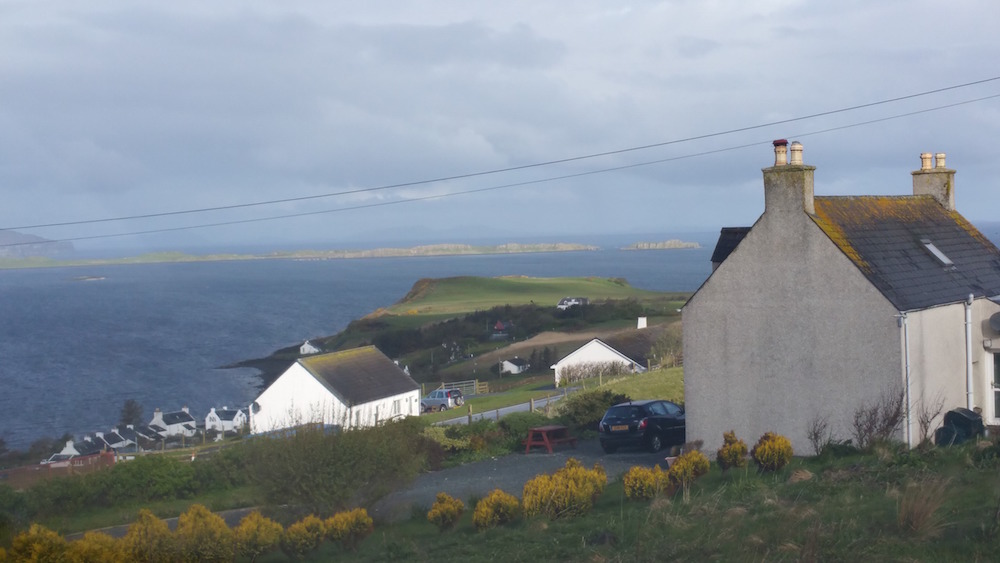 We stopped a couple of times to take photos, most notably at the Dun Beag broch. This broch is set away from the road and you have to scramble up a surprisingly boggy hillside to reach it. When we got up to it, we found a couple of blokes videoing it. Quite why video is the best medium for a static ruin beats me, but there you are. The broch itself is in a pretty good location, with views out to sea (presumably to spot invaders) and up the steep slope that must have helped in its defence. However, it’s quite broken down, but does show the chambers built into the walls, at least lower down in the structure. 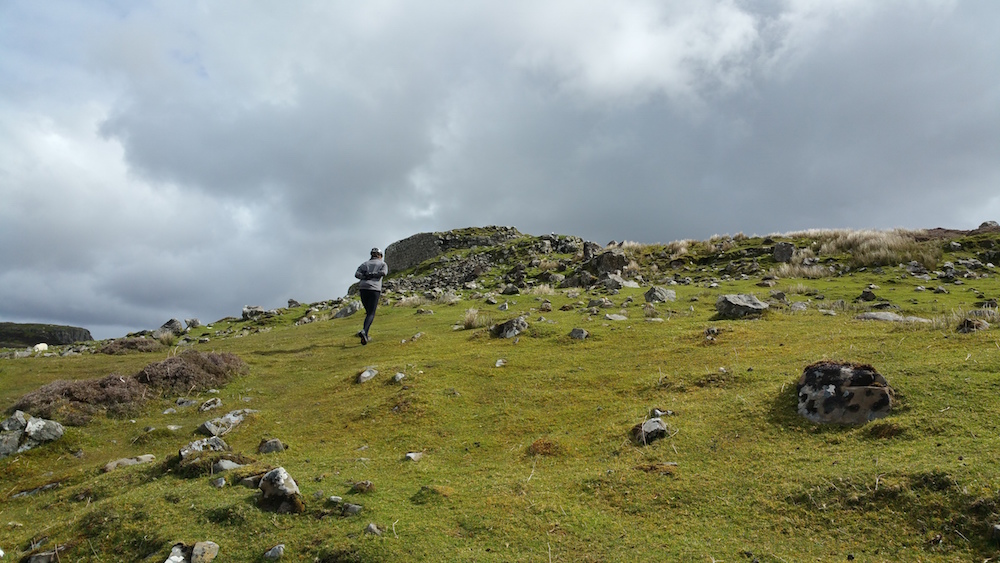 Carol walking up to the Dun Beag broch 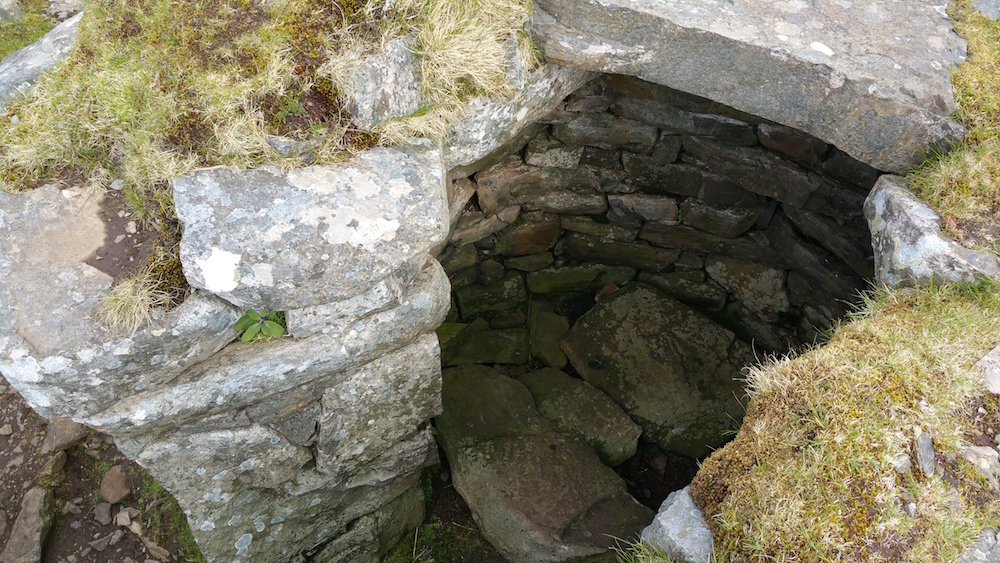 You can still see the chambers inside the broch walls 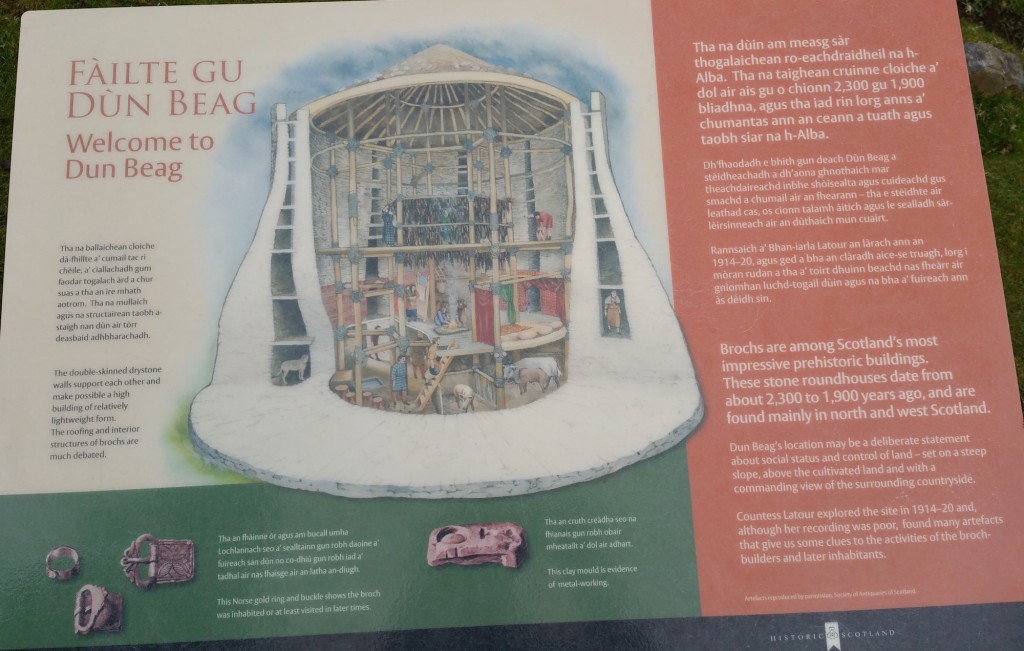 From here it was a rather uneventful ride, though with some quite lengthy climbs. Riding through occasional showers, we reached Sligachan. Last year we took refuge from very heavy rain and ate lunch in the form of Cullen skink here. This year, we kept on riding despite the hordes of tourists wantering about in the road, joining the A87 past Sconser, before turning off on the Moll road. This is a very rough road in some places. We’ve ridden it on a number of occasions, and while it’s traffic free and offers good spots to stop for a bit, the road gets more challenging each time as it decays away. I was glad of the big and beefy tyres the Thorn tandem has! 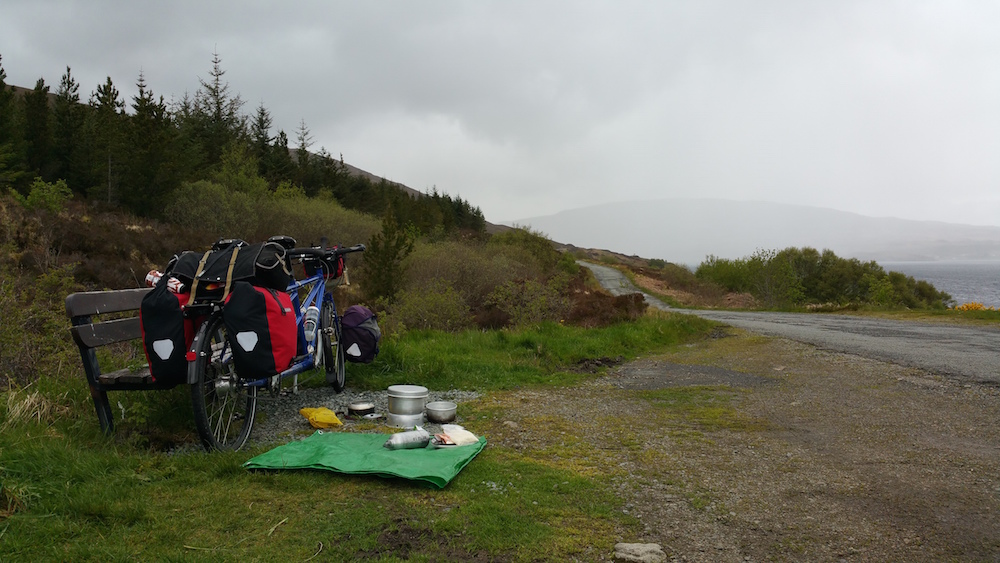 Just after we got lunch cooking, a hefty rain shower blew in!

We stopped for lunch, but just as we got the Trangia fired up, a heavy rain shower came over. We just turned out backs to it and waited it out. Fortunately, it was quite brief and we had a decent meal, before going on out merry way. The road carries on past what appears to be a fish farming installation. Just before zooming down to rejoin the main road, we passed saw a group of cyclists going the other way. They were riding what appears to be narrow road tyres, so I hope they got on OK.

Once back on the main road our speed picked up and we pretty soon reached Broadford. There’s a cafe as you enter Broadford, which offers pizzas cooked in a wood oven. We didn’t avail ourselves of that option, but we did stop for coffee. Then we rode on to the Co-op to replenish our snaack bars. We bought some oatcakes and cheese, and some beer. We’d decided we had eaten so much that we would just eat some snacks in the B&B for a change. We made our way through Broadford and past the turnoff for Armadale to the B&B I’d booked (Taigh an Uillt). We arrived fairly early, and had to hang around for about a quarter of an hour before the landlady arrived and we could get in. We basically slobbed around for the evening, eating the oatcakes and cheese and drinking the bottle of beer before hitting the sack.