The plan for today was to visit Berneray and ride round North Uist. After breakfast, we set off into dark and threatening skies. Also planned was to try and spot some of the antiquities marked on out trusty old Tourist Map of Outer Hebrides, bought many years ago, probably on our first Hebridean tour (before this blog existed). In the event, we decided that spotting standing stones on hillsides of peat and exposed stoes was just that bit too hard! Nevertheless, there are quite a few such sites in North Uist.

Just coming out of Lochmaddy, we spotted a stag, with growing velvet covered antlers. It took a rather imperious stance and watched us ride down the road. 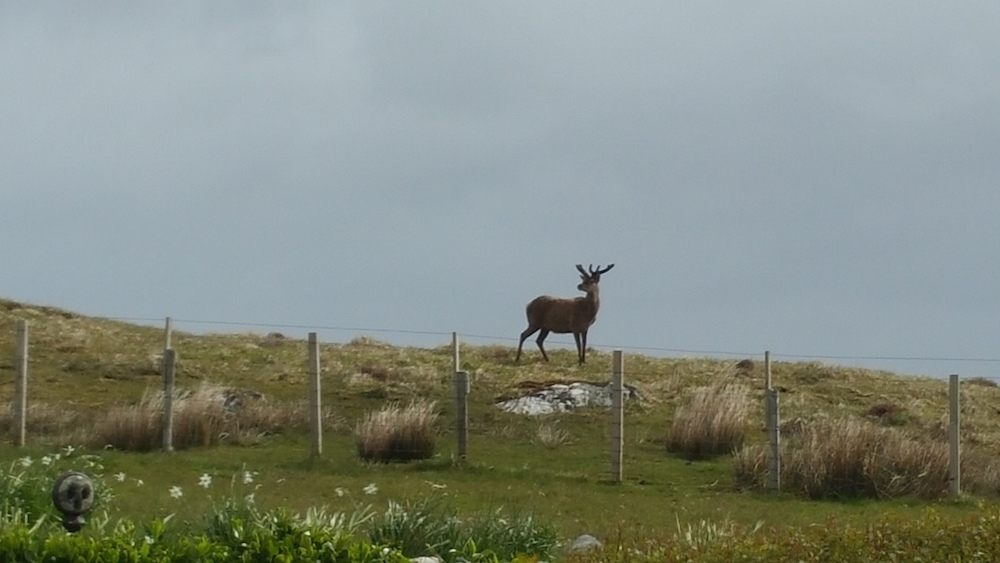 We carried on as the weather improved gradually. On the ride from the main circular North Uist road to Berneray, we stopped to look at one of those tourist plaques. It described a Broch sited on an island in a nearby loch, Dun an Sticir. 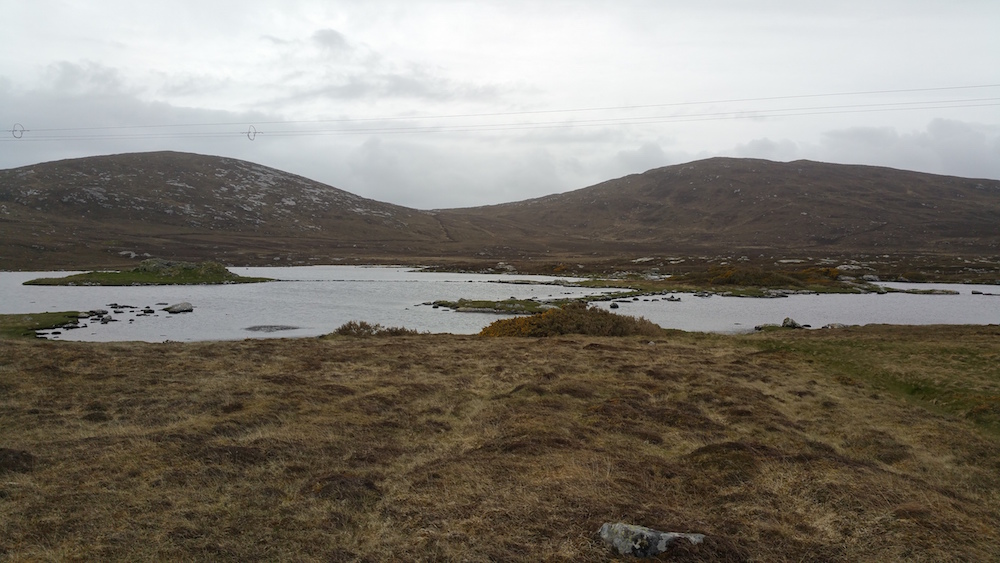 Actually this broch was linked by a series of causeways and islets to the lochside. Apparently it may have had “rocking stones’ which would make a sound and alert the inhabitants to people approaching along the causeways. While brochs are iron age fortified habitations, this broch ended up in use as a more conventional medieval fortified tower until at least 1601, when Hugh MacDonald used the fortification. he was eventually grabbed from his castle on Skye and done to death by the slightly unusual (but unpleasant) expedient of locking him in a dungeon with a lump of salt beef and an empty water flask. 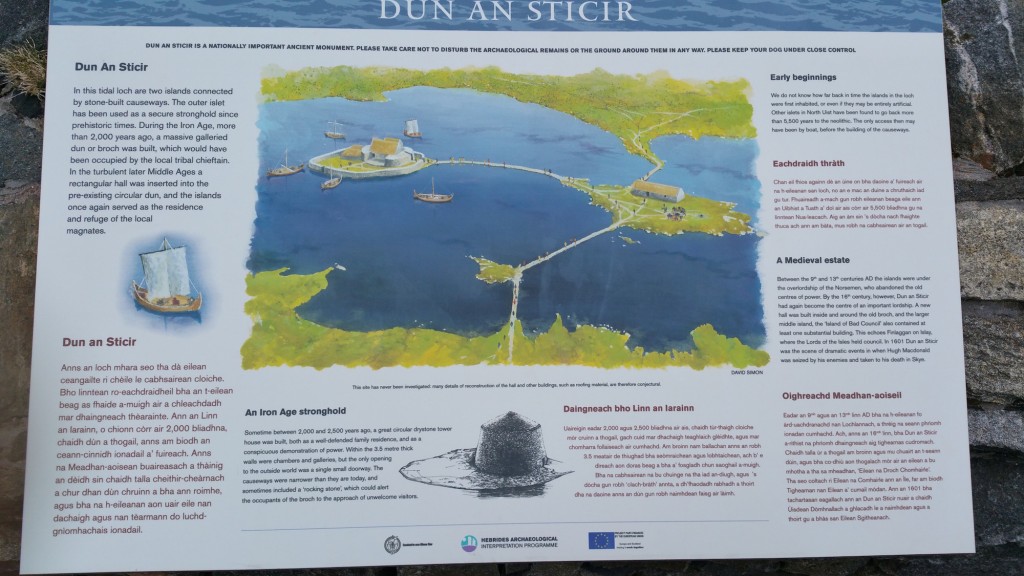 The Dun an Sticir Information board (click to enlarge)

Here’s a closer image than I was able to take (from Wikipedia, and shot by ‘Otter’, (CC BY-SA 3.0 licence))

The Dun an Sticir broch (via Wikipedia)

We rode out along the causeway to Berneray, dodging the ferry traffic, and along the high street before turning left over the hill to an enormous expanse of machair. This was the first time we’d seen actual farming activity going on. We rolled along for a while before stopping in a car park to brew up a cuppa and eat the rest of our breakfast from the B&B. 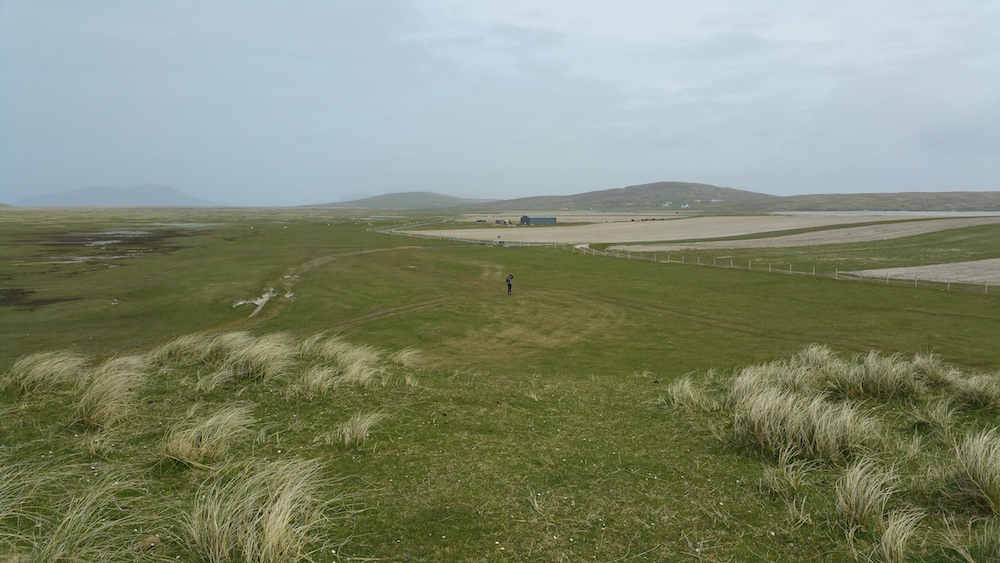 The Berneray machair viewed from the high dunes

Then we wandered over to the beach. The dunes were quite high, and offered an excellent view of the sands and the sea. It was quite bracing, owing to the strength of the wind. Despite the sunny conditions we were now bathed in, the temperature was still well below average for late May. 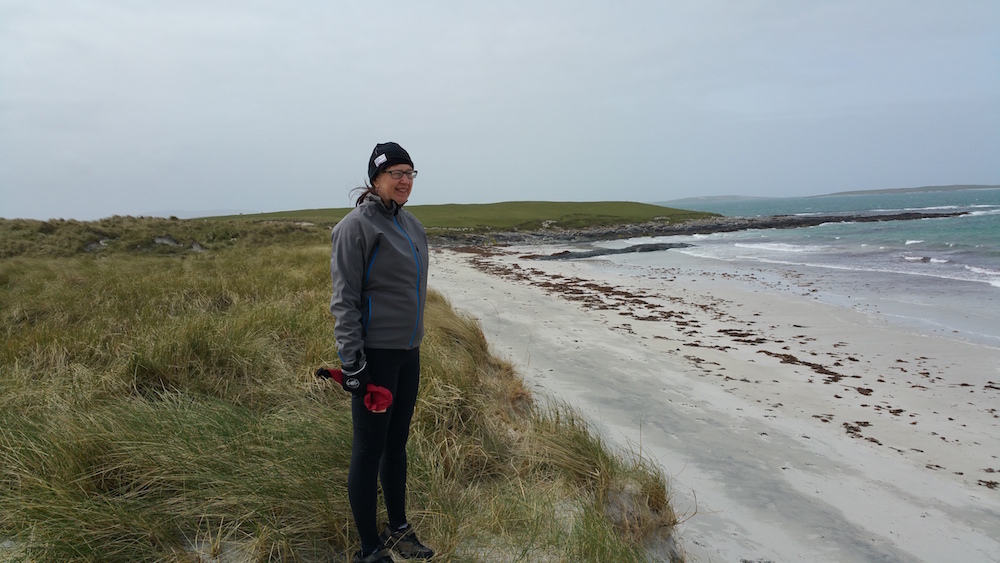 Standing on the dunes was quite bracing! 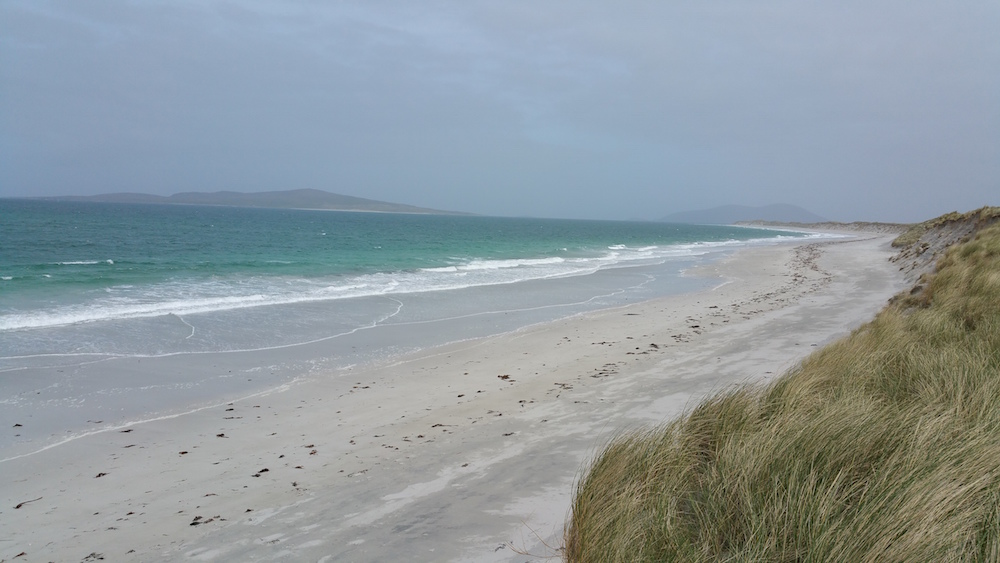 …but the beach is splendid!

Riding further round North Uist, we first saw a couple of more brochs located in lochs – one a bit more convincing than the other, but both marked on the map – and then in brightening conditions rode on, stopping only for some snacks at the Solas Co-op. 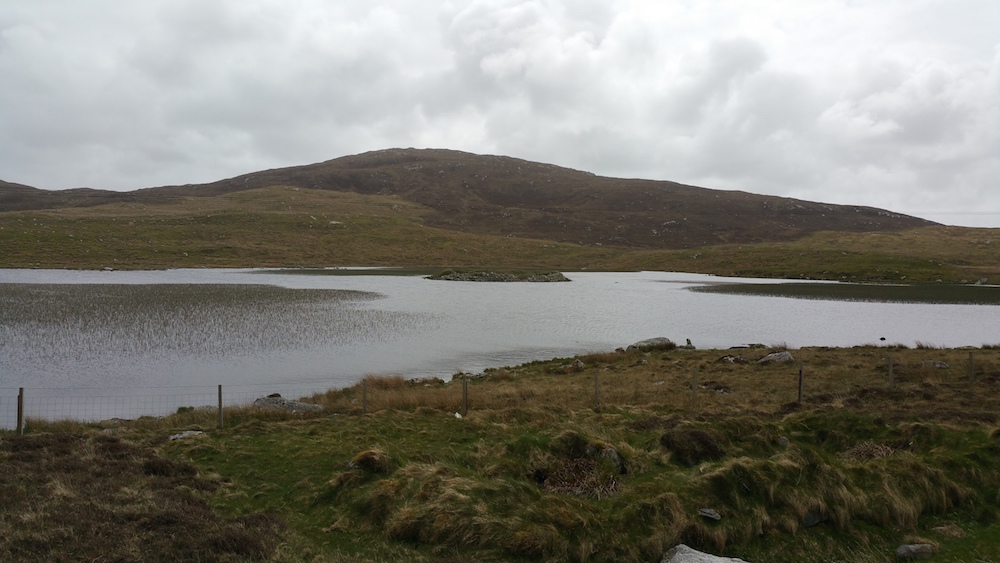 Another broch in a loch!

Despite the bright conditions, we didn’t actually stop for lunch, or take many photos. That was a shame, as it got quite warm, and not only did we get good views of the Isle of Vallay, but later on we reckoned we could see St Kilda dimly out on the horizon. Vallay can be reached at low tide, but really for the cycle tourist I don’t think there’s much advantage. Birdwatchers might find it interesting. 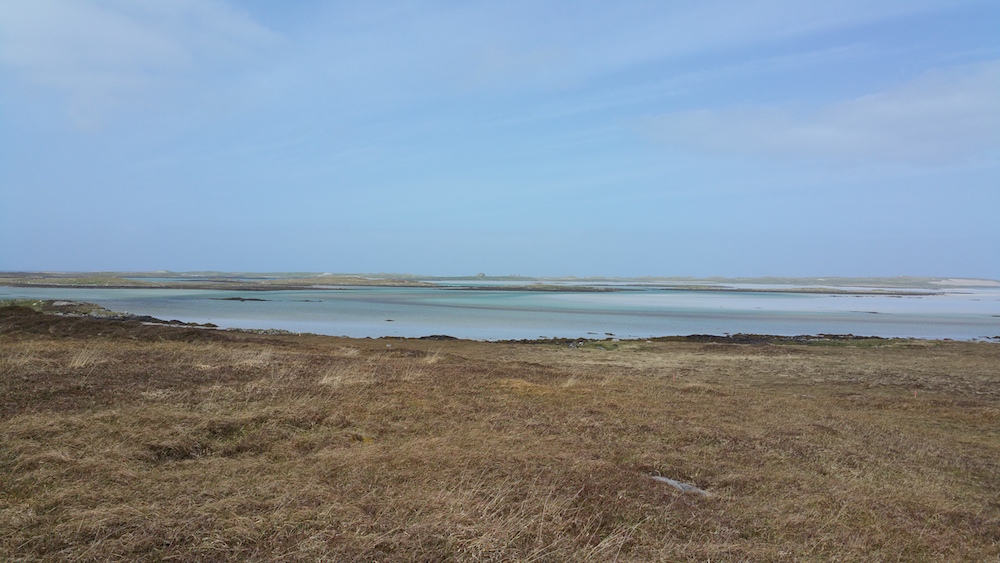 Further on we spotted a caravan with a model eagle and a bunch of birder types (you know, with big binoculars and tattered combat jackets and bored looking partners) gathered around. Clearly, this was the Golden eagle watching place we’d heard about back in Lochboisdale. We pulled off the road and parked the bike. We stood around for a bit trying to see if we could divine if there was anyone leading the viewing. We got rather ignored, presumably since we weren’t wearing scruffy jackets or didn’t have giant binocular strung round out necks. After a bit, we got back on the bike and carried on, only to be rather badly cut up by a couple of twitchers in a big 4×4 who’d followed us out from the caravan to drive about a hundred yards before passing us to turn left. After angrily grumping about this, we pressed on.

It was getting warmer and warmer, and at a snack stop, I pulled off my bib tights, exposing my alrmingly pasty pins to the sun for what turned out to be the only time on the tour. Then it was a pretty uneventful (but very beautiful ride back along the coast to Clachan, where we turned left towards Lochmaddy.

Once back at the B&B, we got cleaned up, then wandered over to the Hamersay House again for dinner. I drank Corncrake ale, and had giant scallops for starters, and for main course, Carol had Goan style curried monkfish while I had a plate of absolutely enormous langoustines for me. The langoustines were so big I need a pair of those crab claw crackers just to open up their adbominal tergites. Excellent stuff!

To settle our food, we walked over a footpath and bridge (now somewhat decrepit and condemned) to the camera obscura built on a drystone cairn. 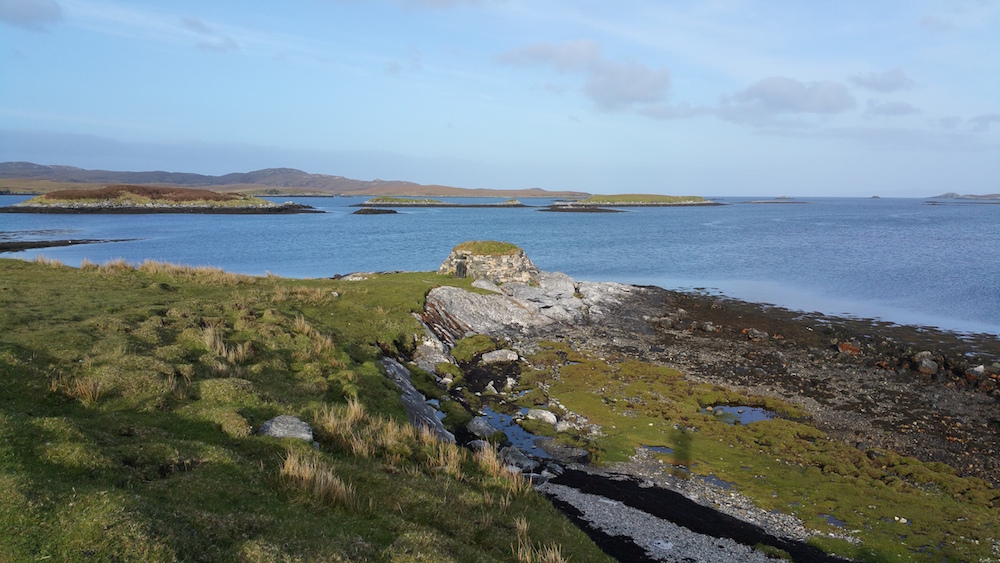 This cairn houses a camera obscura, now in a state of some disrepair