Looking out of the window first thing in the morning was pretty dispiriting: wind bringing a lashing of rain! However, things had improved dramatically by the time we left the hotel after another excellent breakfast. We left before the coach, but we expected to be on the same ferry to Eriskay. I’d asked some of them where their next destination was, and they were a bit vague about it. Later, as we waited for the Eriskay ferry, I spoke to their tour guide and it seems that hotels big enough to accommodate a coach party are few and far between. They were headed for two nights in Stornoway, with a day touring round some of the attractions. Anyway, we rode round clockwise and turned north towards Ardmor and the airport. We rode a little beyond the Ardmor turnoff and paused to enjoy the view of the cockle strand, with the tide in. 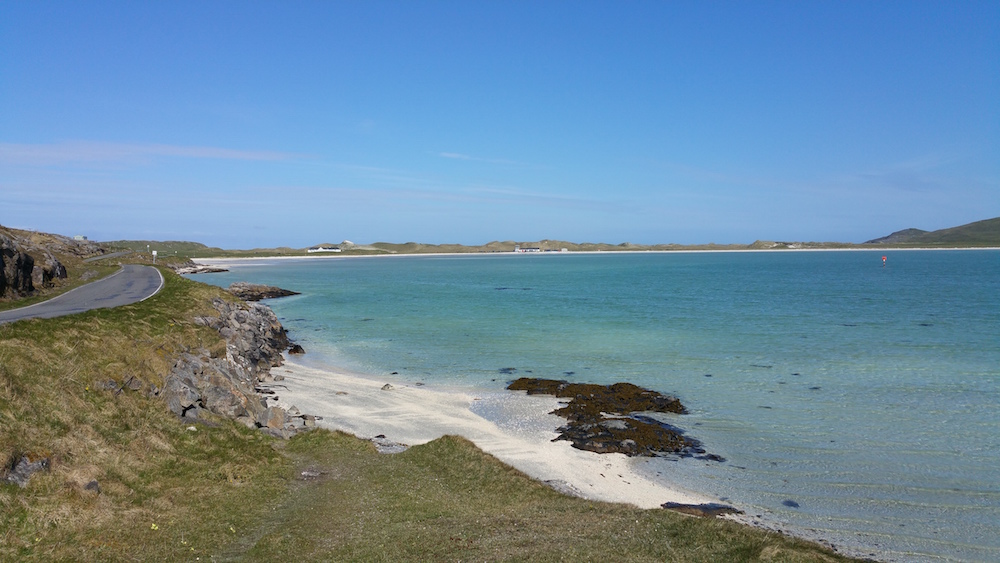 Barra airport with the tide in

Then we backtracked to take the turn for the ferry at Ardmor. When we reached the ferry terminal, we could see the coach, and we ended up chatting to the coach party quite a bit. The organiser had chosen a smaller coach than usual, so it could fit the smaller ferries. As it was, the coach grounded itself front and rear when getting on and off the Eriskay ferry, which caused some consternation. I expect the same would have happened on the Berneray-Leverburgh ferry.

The crossing was smooth and enlivened by the sight of gannets diving around us. After the coach negotiated its exit from the ferry, we paused at the small terminal building before climbing the road out of the harbour. This road climbs quite high, and offered lovely views across to Barra and beyond. 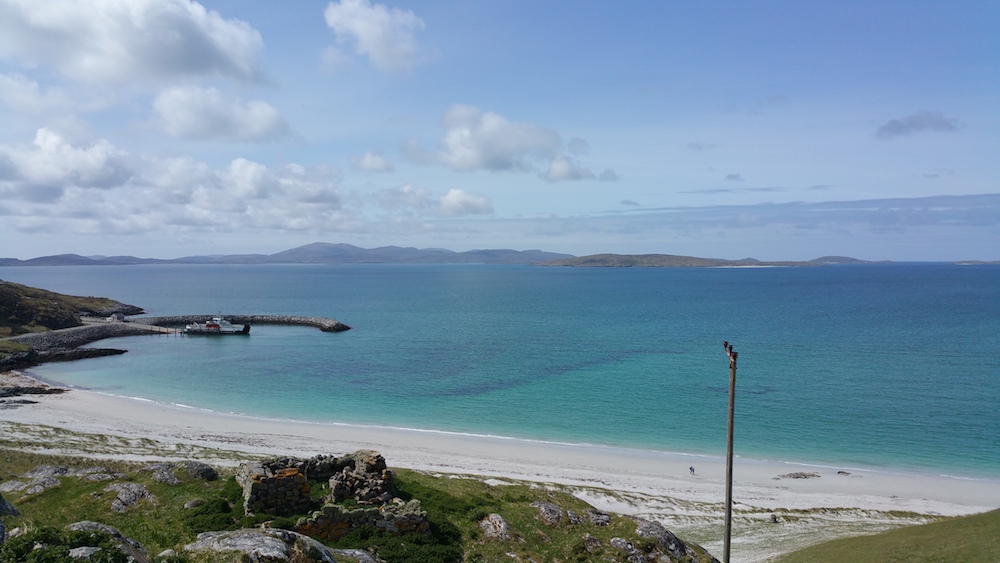 Looking back to the Eriskay ferry from the hill

There’s a nice descent to the village and on to the causeway. We’d planned to take an “on spec” route to Lochboisdale via detours to the machair to have a picnic and admire the beach. We sat at a picnic table eating our lunch and feeling a bit cold. 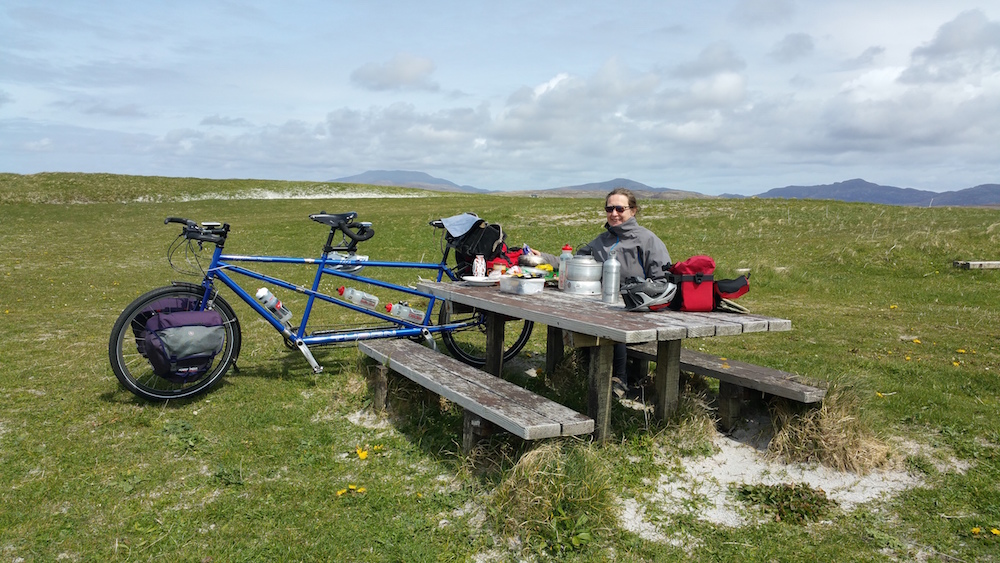 Another photo of a windswept tandemist enjoying a picnic lunch, this time on the South Uist machair 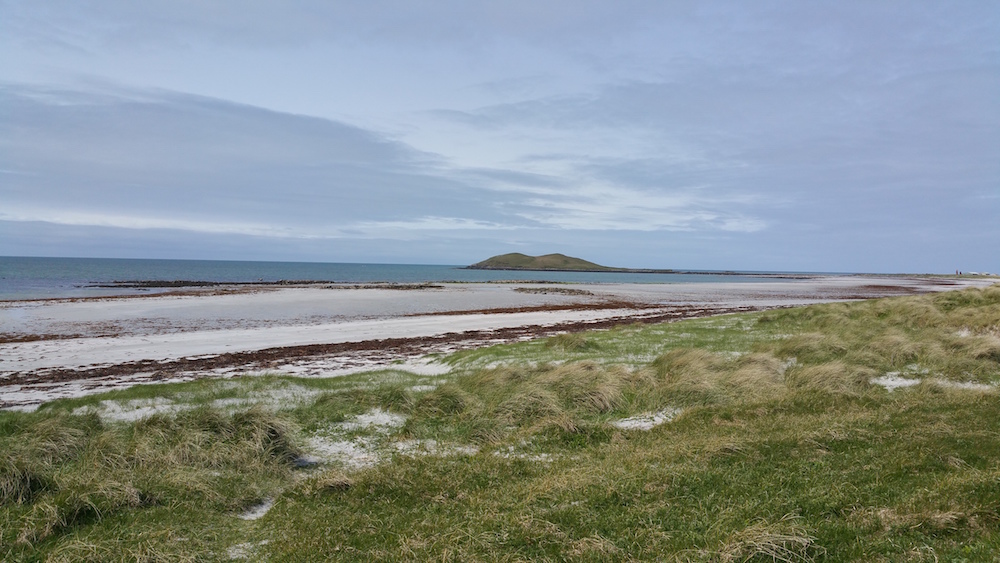 The beach near our lunch spot

It wasn’t yet raining, but the temperature was really a bit pathetic for late May.  We found ourselves on cycle route 780, and pretty soon saw a sign for the Cladh Hallan roundhouses. This sounded quite interesting, so we turned down a road that gradually declined in quality, ending up as a dirt track by a large cemetery. No further signs for the roundhouses could be seen! At this point, a rain shower started and we decided not to pursue this any further. As it turns out, these roundhouses are pretty low-lying remnants for more information, see this website and this Wikipedia page. Apparently a couple of mummified bodies were found – the Wikipedia entry says “According to recent anthropological and DNA-analysis the skeletons of a female and a male were compiled from body parts of at least 6 different human individuals” and that the mummies had been placed in peat bogs for the presumed purpose of preservation before being interred. If we’d have found them we’d have seen this:

We rode on towards Lochboisdale. Lochboisdale’s really not too exciting, as it’s a pretty loose collection of houses and buildings. It has of course got the Lochboisdale Hotel, and now a large marina development. We spied the very pink community cafe as we approached, and seeing as it was really a bit early to go to the B&B, we popped in for tea and cakes (which were excellent). We spoke to some other customers as we were leaving, who alerted us to a guy with a caravan and a big telescope trained on some nesting Golden Eagles up on North Uist. We mentally bookmarked this for investigation in a couple of days.

The we had a quick detour to the new harbour, which in part is being set up as a yachting marina and in part as a commercial site for seafood processing, we rode back to Brae Lea House, our B&B for the night. This is a B&B we’d used in 2014, it’s very comfortable with an excellent breakfast.

After unloading the bike and getting cleaned up, we wandered down to the Lochboisdale Hotel for a pint of McEwans 80/- and a plate of haddock and chips. After that, we walked out along the new harbour before returning to the B&B. From the new harbour, Lochboisdale looks quite pretty. Perhaps a thriving marina will bring some changes to the town! 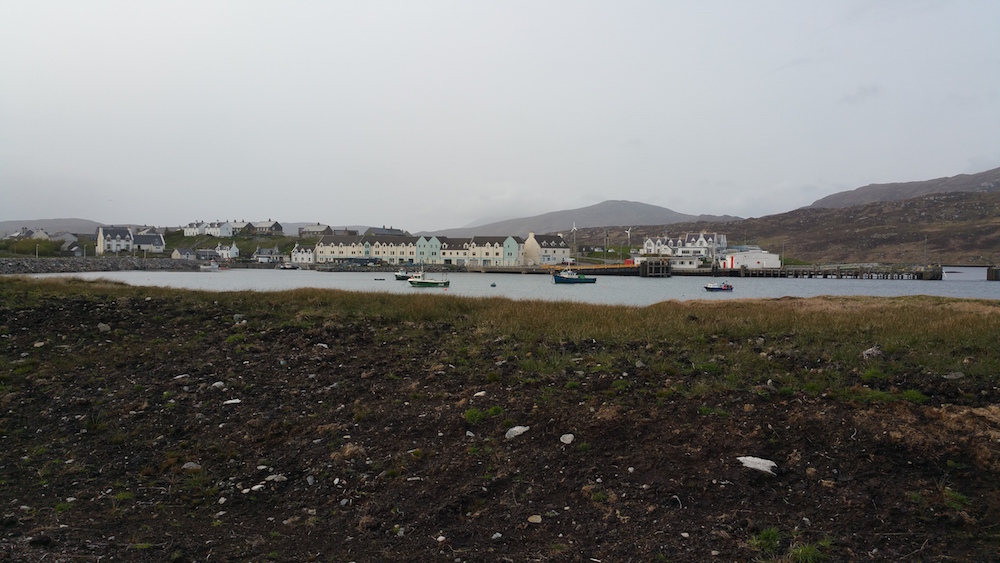 Lochboisdale from the new harbour and marina