We arrived at Oban around lunchtime, having spent a few days visiting our families en route. We easily found Hazelbank Motors, where we had arranged to leave the car during our trip. I think the lady at the desk remembers us from previous tours. The drive had been good overall, though we had some vile weather on the drive from Edinburgh to Oban. After unloading and reassembling the tandem, we attached the panniers and left the car to ride down to the Caledonian MacBrayne ferry terminal. As usual, we were there rather too early, and the ferry wasn’t due to leave until 15:40!

We bought Hopscotch tickets for the Oban-Castlebay, Barra-Eriskay and Lochmaddy-Uig crossings (Hopscotch 20, £26 per person with the bike travelling free). We spent the remaining time eating excellent smoked salmon sandwiches from the nearby seafood stall and talking to fellow cyclists. Two of them were riding bikes with Rohloff hubs. We also saw a friend from work and her partner, who were travelling in a sports car.

We found the ferry was a bit smaller than we’d been on before. It was really a bit cold to entice us out on the open decks, so we contented ourselves with looking out of the windows during the five and a half hour trip up the Sound of Mull and across the Minch to Castlebay. We saw quite a few porpoises, and a variety of seabirds. We wandered over to the cafeteria for fish and chips, and I had a couple of bottles of beer.

Arriving at Castlebay, cyclists were last off the ferry. It was a lovely clear evening, but quite cool. The sun was of course low as we rode over the two miles or so to the Isle of Barra Beach Hotel, where I’d booked a double room for a couple of nights. As it turned out the coach party on the ferry were booked into the same hotel, and we’d been upgraded to upper sea facing room – this was good, as we had excellent views of waves on beach. Despite arriving after the coach, we managed to check in before the coach party had got all their luggage sorted out. We were also advised to have breakfast early the following morning before the coach party!

We popped out for a brief walk on beach then back to our  room. We were pretty impressed by the hotel, which seems well appointed – it’s been done out in a neat nautical style in its recent refurbishment. 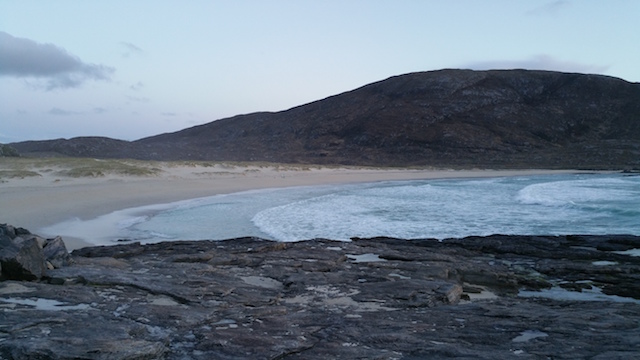 The beach by the hotel, Barra