We woke to a resurgence in wind velocity – and it was going to be tight getting to the Berneray to Leverburgh ferry in time. In response to my stoker’s urgings, I tried to keep our pace up, but this was difficult given the very strong headwinds. Oh, and the bizarre conversation from a motorist wondering if he was on the right road for Benbecula! In the end, we made the ferry with about 10 minutes to spare.

The crossing was pretty uneventful – we chatted with other passengers two of whom we’d met at our first B&B. I saw a gannet and a large eagle circling over the sea that seemed to excite the birdwatching contingent: they all dashed out on deck to have a better look.

Once in Leverburgh (which has an interesting history – it’s worth visiting the link), we popped into the grocery store for some snack bars, then headed off up the west coast road, rather than the rather more arduous Golden Road. We had ridden this route some years before, on the old Dawes tandem with a full camping load, and we thought that while it’s a glorious route, it might be a bit unpleasant with the NE gale. But even on the western route, the head wind was still pretty hard going. At least our feet and hands were still dry as it hadn’t begun to rain. We stopped periodically to photograph the landscapes. 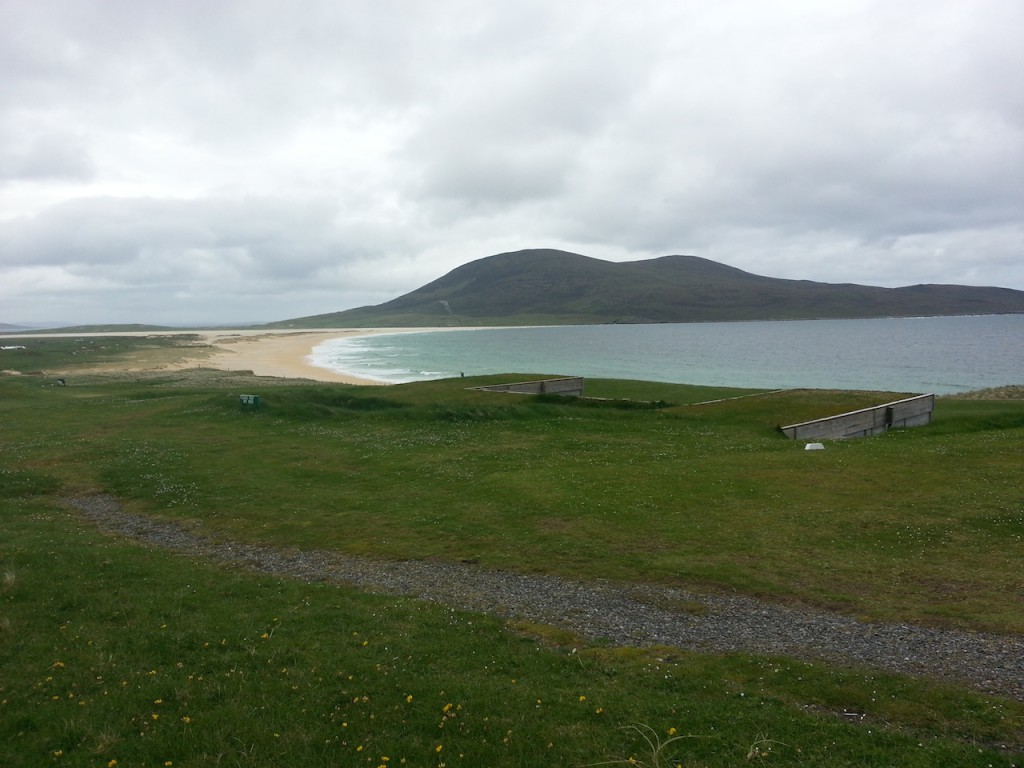 Even under glowering clouds, the beaches seem to glow 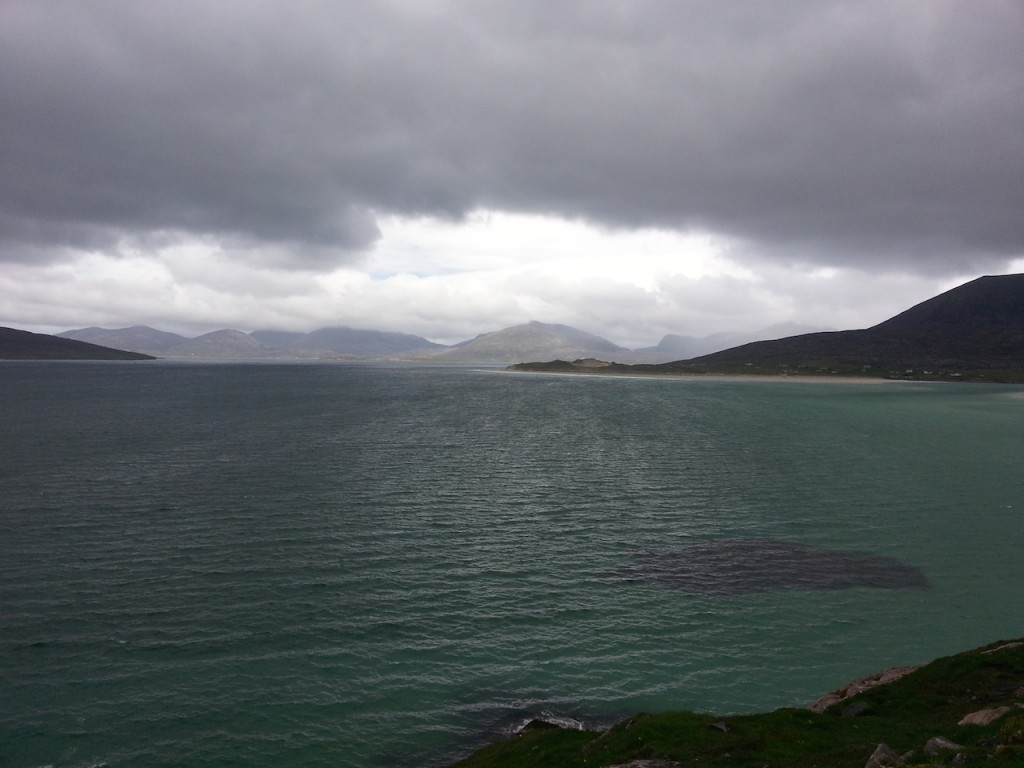 I had trouble holding my phone level in the gales 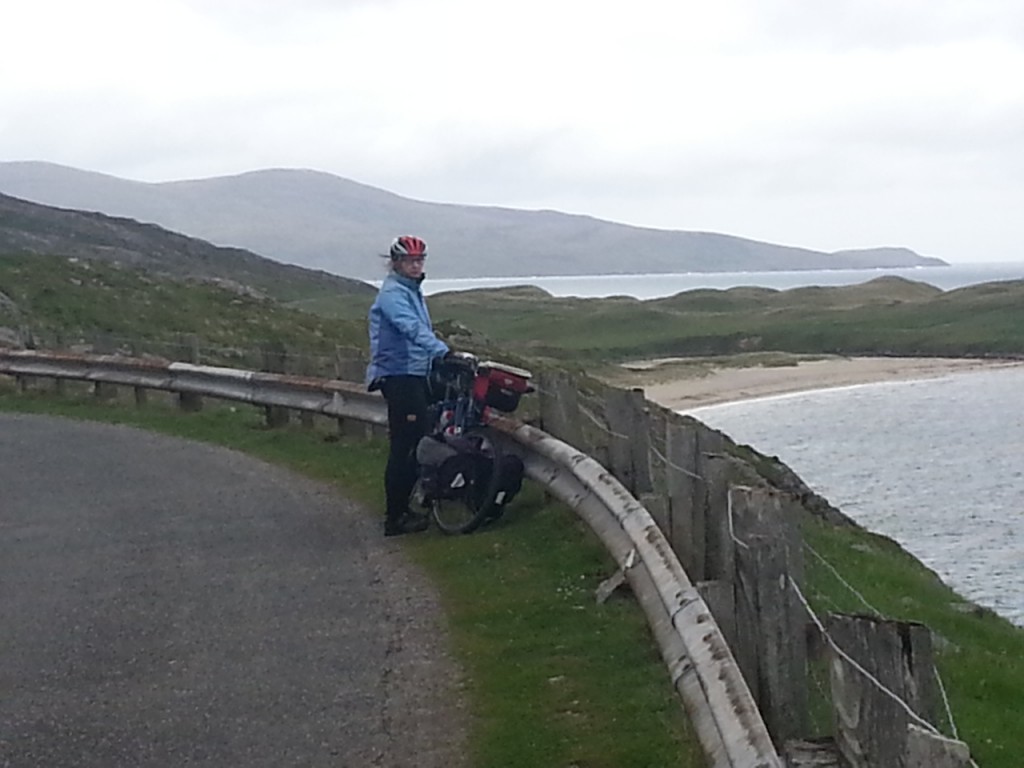 The Stoker braced against the elements! 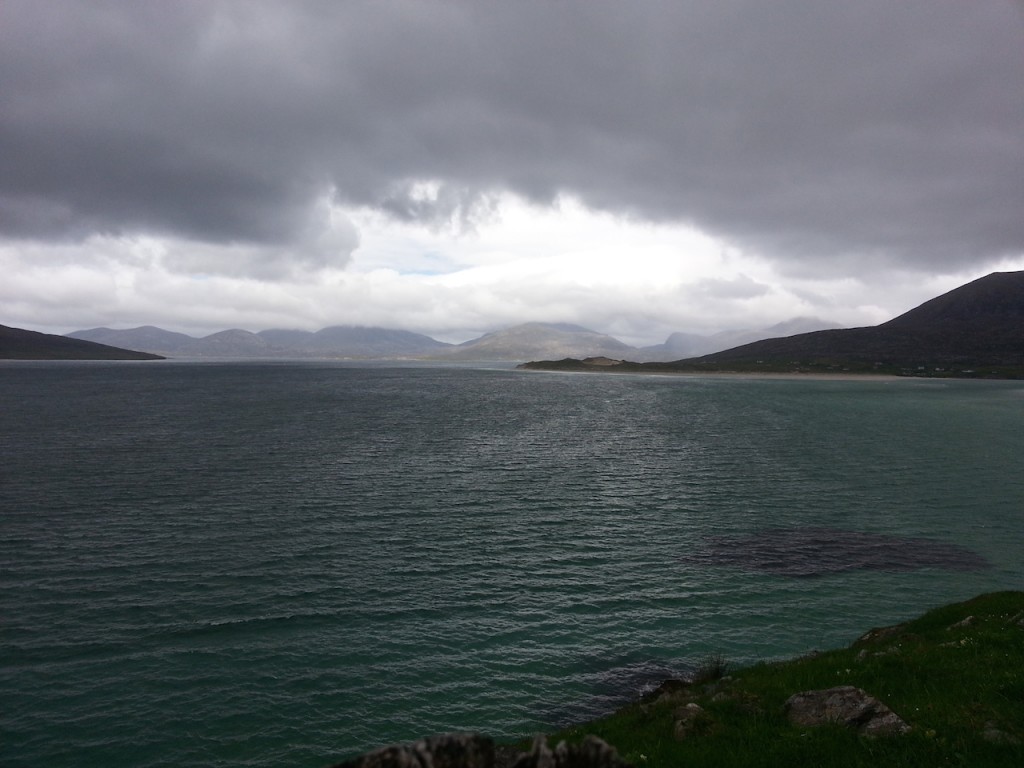 It was while we were in the Hebrides Art gallery and tea room
(eating scones and drinking tea) that the drizzle began. Soon after, the big climb began. Despite the rain, this was pretty good going, and it wasn’t until well after the top that we felt the full force of the wind, laden with rain coming at me with sufficient velocity that it felt like l was being blasted with stones, and rendering me practically sightless. Still, we reached Tarbert in good shape (though slightly soggy).

The B&B we were heading for no longer does evening meals, so we thought we’d have a quick survey of Tarbert for something to eat. Sadly, everything seemed shut. Even a bar advertising “all day food” didn’t start serving food till 5pm. We decided to press on. As we headed out of Tarbert, the wind seemed to strengthen and the rain came on again.

Soon enough we saw the climb of Clisham (the highest mountain in the Outer Hebrides) rearing up ahead of us, with its steep 1:7 section waiting to be scaled. I racked down the gearing as the gradient steepend. We were doing OK in gear 1 (at basically walking speed) until the wind was shrieking and flinging us from side to side and ultimately blew us to a standstill. Steering at our low speed was in practice impossible, so we bit the bullet and climbed off to push though the worst of the wind. There’s a quarry halfway up – there we remounted to ride the rest of the way.

Pretty soon we were an the top, then descending gently to the turn-off for Maraig. This is quite a sleep descent to sea level, but easily negotiated (on the way down at least). At Lochedge Guest House, we had a really warm welcome, and settled into a splendid large room. We’d visited Lochedge back in 2012 – it’s possibly the best appointed B&B we’ve ever stayed in. Sadly, Richard Barrett, who runs the place with his wife, is closing the B&B at the end of this year. We heated up a couple of sachets of our travelling food for dinner in the kitchen, then chatted for a while with another couple staying there. And so to bed, reflecting on another tough day in the saddle.

We planned an easier day for day 4, but what exactly depends on the weather. At least the wind seems to be forecast to be dropping in intensity.