Our B&B had excellent double glazing, which deadened the howling gale, but not the car alarm that sounded at 4 am, presumably set off by a gust of wind.

We peered anxiously out of the window at various times before we were due to leave – it was hard to judge just how strong the wind was, given the lack of trees, but at least the rain was predicted to be showers rather than steady. We faced over 40 miles in these ‘interesting’ conditions! 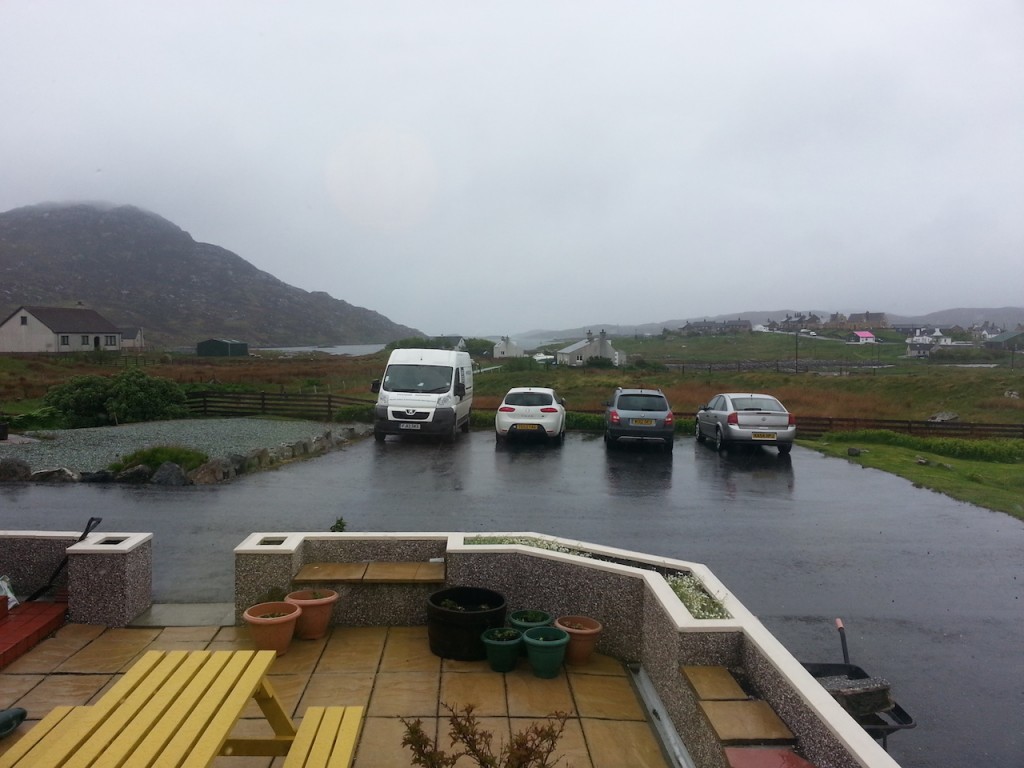 The view from our room on the first day of cycling!

Compare the picture above with the similar view the previous evening!

The day’s ride probably features as the most unpleasant in all our tours. We faced a strong 35 mph headwind for most of the day, bringing a serious lashing of rain. In these conditions, nothing keeps your hands and feet dry – Carol staved off the inevitable by wearing full gloves and neoprene overshoes, but ultimately we both had wet and cold hands and feet.

Stopping far more than a few minutes resulted in a severe drop
in body temperature so, with only a few exceptions such as ‘nature breaks’ and to cram bananas and snack bars down our gullets, we felt it prudent to keep moving.

The only cyclists we saw were a group of four with a straggler (who I assume was not actually part of the same group) who passed us during one of our stops. We caught the straggler, and though l hoped he’d tag onto our wheel, he was soon well behind us. We passed the other four as they stopped at a Co-Op.

By about 25 miles of this abuse, Carol was feeling the conditions a bit. We paused for one of our snack bar breaks, and I was a little shocked at her weather beaten appearance. I imagine l looked much the same! Unfortunately the best tactic seemed to be to press on as best we could to our B&B in Lochmaddy.

By Clachan it was clear that Carol was severely energy depleted except for the four or five miles after each snack bar! At least the wind wasn’t in our faces so much after we turned eastwards at Clachan…

We made it to the B&B in Lochmaddy, packed the bike away in a wooden summer house and proceeded to get cleaned up (and warmed up). It took a surprisingly long time to regain full sensation in my fingertips. We booked dinner in the Hotel formerly known as Tigh Dearg. I figured several beers and possibly whiskies beckoned!

Lochmaddy is quite a small village. It has a community art centre with a nice cafe open during the day and two hotels. The Lochmaddy Hotel gives the impression of having seen better days – it seems to cater for the fishing brigade. In the past we’ve had quite good seafood there, but our last visit (several years ago) wasn’t so great. It may have improved. The other hotel was until recently the Tigh Dearg (Red House) and was quite swanky. We stayed there for a couple of nights a few years ago. It’s been sold to new owners, and it’s now called the Hamersay House Hotel, and it has been painted blue! As well as two hotels, Lochmaddy has a few bed and breakfasts. We stayed (as we had done on a couple of previous occasions) at Rushlee House. It’s always very friendly and is well-appointed.

According to Wikipedia, Lochmaddy was a haven for pirates back in the early 17th century (but no citation is provided). All very quiet these days, no Jack Sparrows haunting the place! It does have some interesting marine life (possibly about to be challenged by a planned marina). A short walk takes you to the House of Shadows, a rather neat camera obscura built out of stone and looking like a cairn.

Over at the Hamersay House Hotel, we shared a starter of hot and cold smoked salmon, smoked scallops and fish pate, followed by local venison burger with brie and bacon (me) and salmon (Carol). I had a couple of bottles of beer from an Orkney brewery, Corncrake Ale and Northern Light.

After dinner we had a stroll around. Nothing much had changed other than the ownership of the former Tigh Dearg, and its transformation from red to blue! By this time the wind had almost entirely dropped and it was really rather nice. Maybe tomorrow will be OK, we thought. 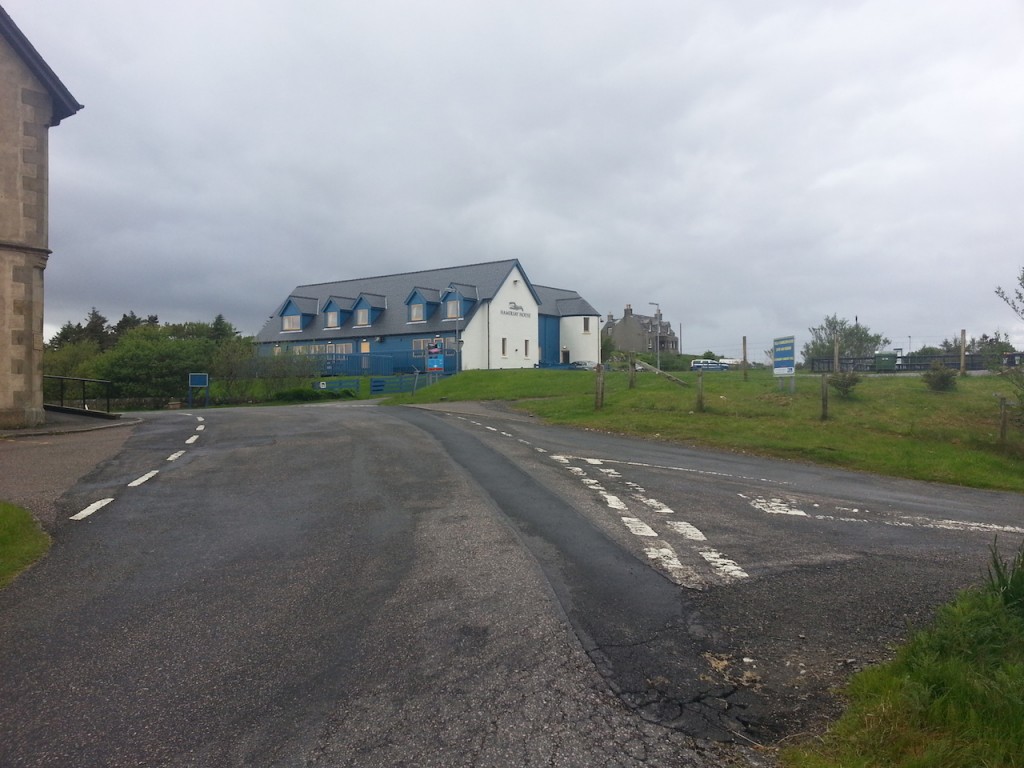 Through all the day’s abuse, the Thorn tandem behaved well with impeccable handling even in some of the more alarming single
track road incidents.