This was to be a slightly shorter mileage today, estimated at around 40 miles, plus the ferry from Berneray to Leverburgh. Our destination was a Bed and Breakfast at Maraig, on the shore of Loch Seaforth in Harris. My stoker was absolutely convinced we’d have trouble scaling Clisham towards the end of the day. Me, I figured it wouldn’t be so bad…

It was quite chilly as we started (though it was another brilliantly sunny day and forecast to be quite hot later on), and we were a little later leaving than intended (mostly due to chatting to the B&B lady!), so we had a bit of a dash to make it to the ferry – which we did with about 10 minutes to spare. Once again, there were quite a few cyclists waiting for the ferry to come in. As the crow (or maybe seagull) flies, it’s not far from Berneray to Leverburgh. However, the crossing takes about an hour as it zig zags around various obstacles. 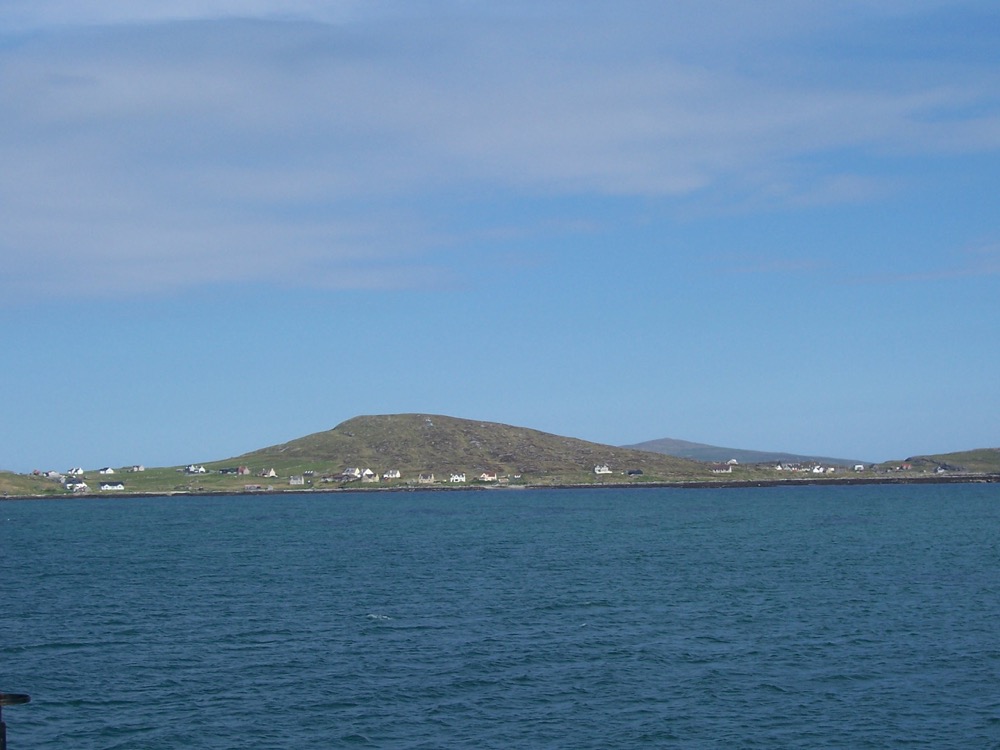 Berneray receding as we cross to Harris

Once in Leverburgh, the cyclists dispersed along the road. We didn’t ride for much more than half an hour before stopping by a fabulous beach to make a coffee and eat a snack lunch. We were joined by a pair of cyclists from the Musselburgh Road Club – I think they had retired and were spending a good proportion of their time touring in all parts of the world. 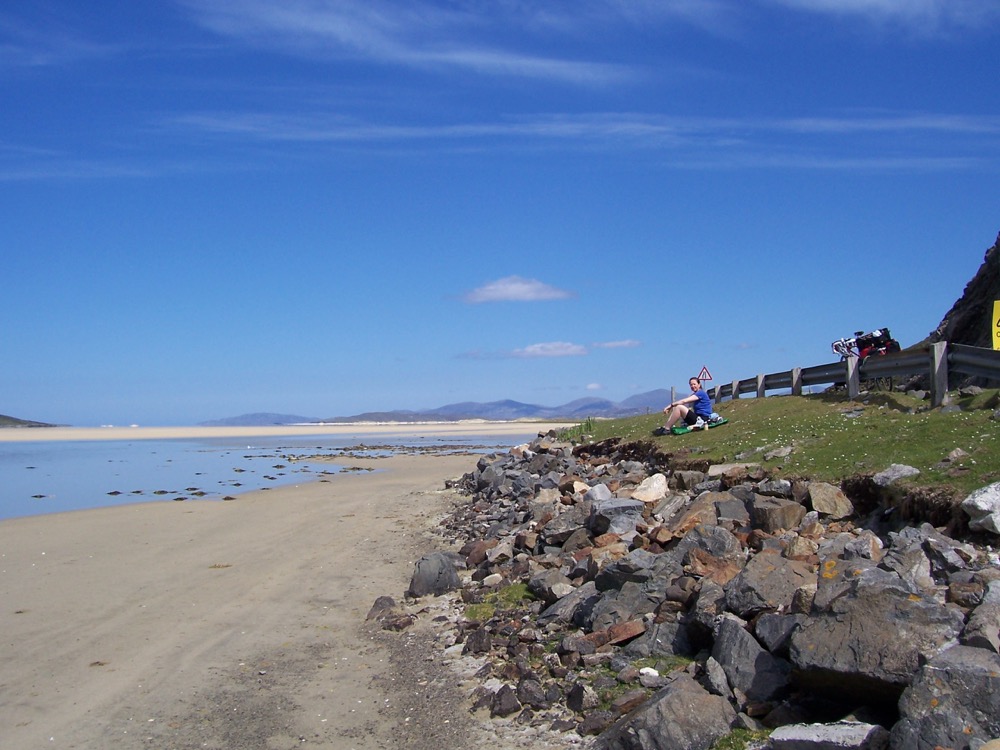 Snack spot! Rather idyllic on the day. 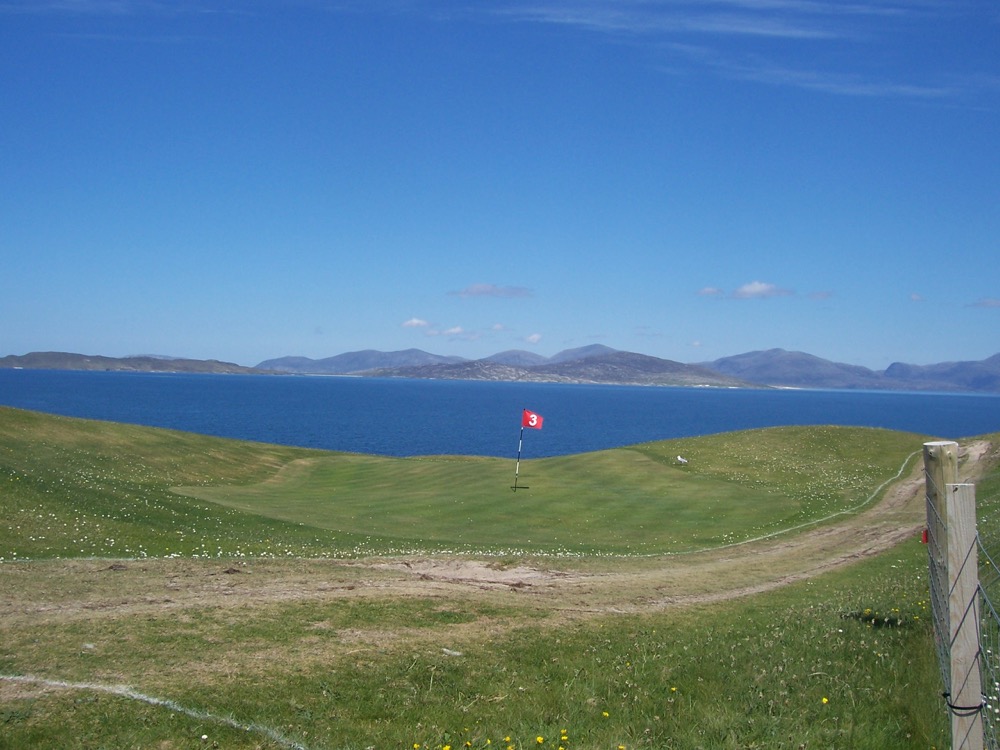 This has to be the finest view from a golf course! 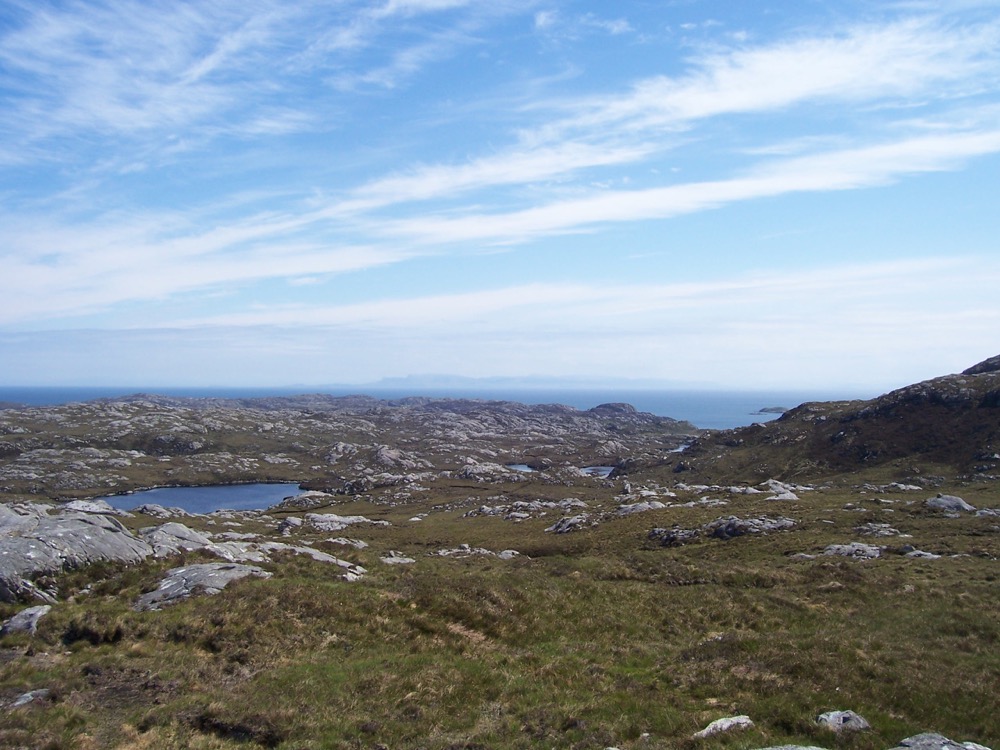 On the rocky hills of South Harris

Our progress to today’s destination, a bed and breakfast at Maraig, was quite leisurely due to frequent photo stops, and two major climbs. The first of these climbs was before Tarbert, and features a climb from the golden sands up through the weird rocky landscape that Harris is renowned for. We didn’t stop in Tarbert, but did (for a drink bought in a grocers)  just below the second big climb of the day, over Clisham. We have memories of this climb from earlier tours, and it was just as hard to get a tandem over as we remembered! So perhaps my stoker’s memory was somewhat more reliable than mine. At the top, we stopped to stretch, as my neck was feeling a bit stiff. 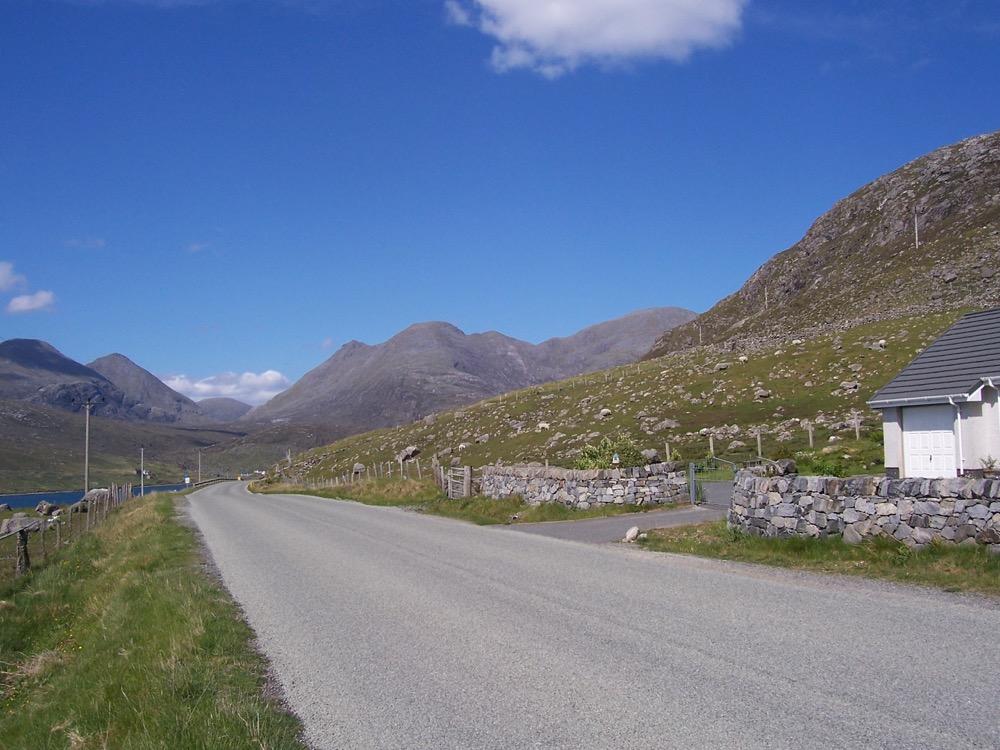 Looking towards the biggest climb of the day

Just over the crest of the hill is the turn off to Maraig. We met Richard (the owner of the B&B) coming up the steep road to meet us, as he’d heard the tandemists he was expecting were looking a bit lost!  Maraig is a small collection of houses down at sea level – it’s quite a long way down. Before dinner we went out for a stoll along the side of the loch. It was a particularly nice evening as the sun began to drop below the mountains. 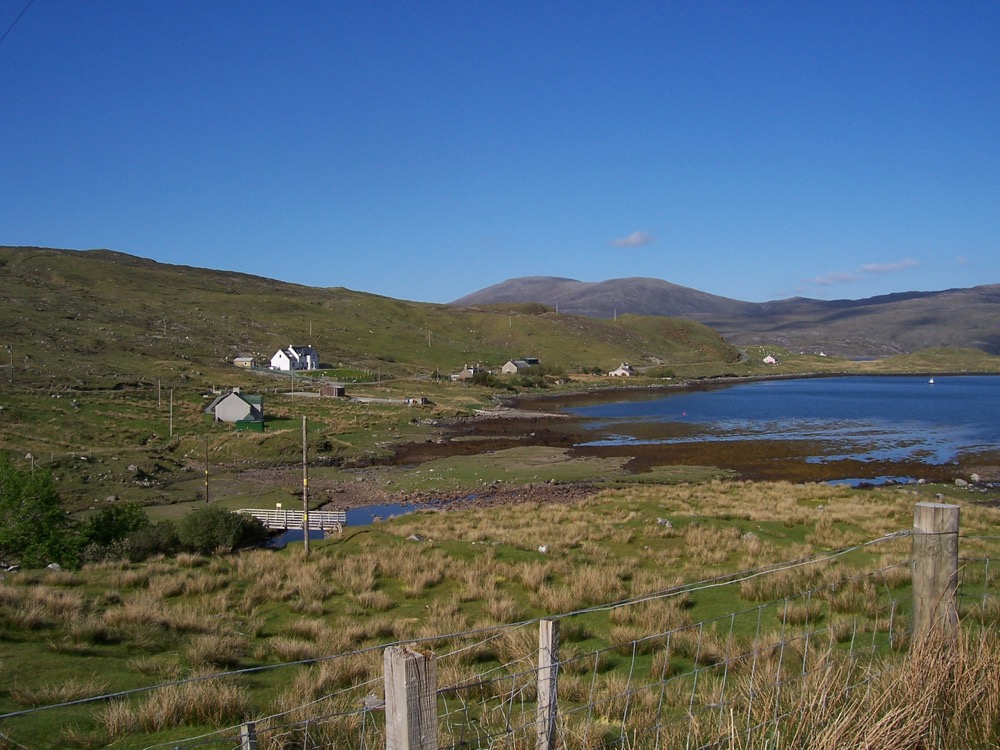 Maraig, Loch Seaforth. The Lochedge B&B is the white building

Lochedge B&B is in a most spectacular location. It’s also the most lavishly set up B&B I think I’ve ever stayed in. I had booked this after receiving a Tweet earlier in the year. I’d tweeted that I would be cycling in the Outer Hebrides and this prompted said response. I checked out Lochedge’s website and was sufficiently impressed that I made an advance booking.  As it turned out, it was a truly excellent choice, in all respects. The bedroom furnishings were better than I’ve seen in a B&B before…and I’ve stayed in a good many. The room had an HD TV with a Freesat receiver, and even the bedside radio had an iPod dock. There was, of course free WiFi. Because the B&B was so far from Tarbert, it had made sense to book dinner in advance.  Dinner was an excellent three course affair (vegetable soup; local mackerel; gin and tonic sorbet) and was of a very high quality. Added to this was the very good company from the other guests, and from Richard himself. The only downside was that we don’t trundle around the highlands and islands with bottles of wine in our panniers. All in all, Lochedge B&B is one that I can highly recommend.

Nature points: a seal seen basking, a variety of wading birds, more geese with goslings, loads of dragonflies whizzing about. And at one stop, many sundews.

Lochedge B&B: frankly this might be the best B&B I’ve ever stayed in (see above).