This was a really warm and sunny day, and was forecast to be like this all day. I’d planned quite a long ride, encompassing climbs over Schiehallion and Ben Lawers, scenic rides on the Foss road and up Glen Lyon. In total this came to about 75 miles, and in the event brought with it some excitement!

We set off quite early, and negotiated our way to the Foss road. Annoyingly (since this is a road that would particularly appeal to cyclists), it seems one has to venture onto the A9 to get there. Fortunately, this is only for a very short stretch, and it was still quite early so traffic was light.  After leaving the A9, the Foss road rolls up and down before running alongside Loch Tummel. The loch was particularly still, and offered near-perfect reflections of the other bank. It was idyllic, with the sounds of birds and livestock among dappled shade and lushly green meadows and trees. 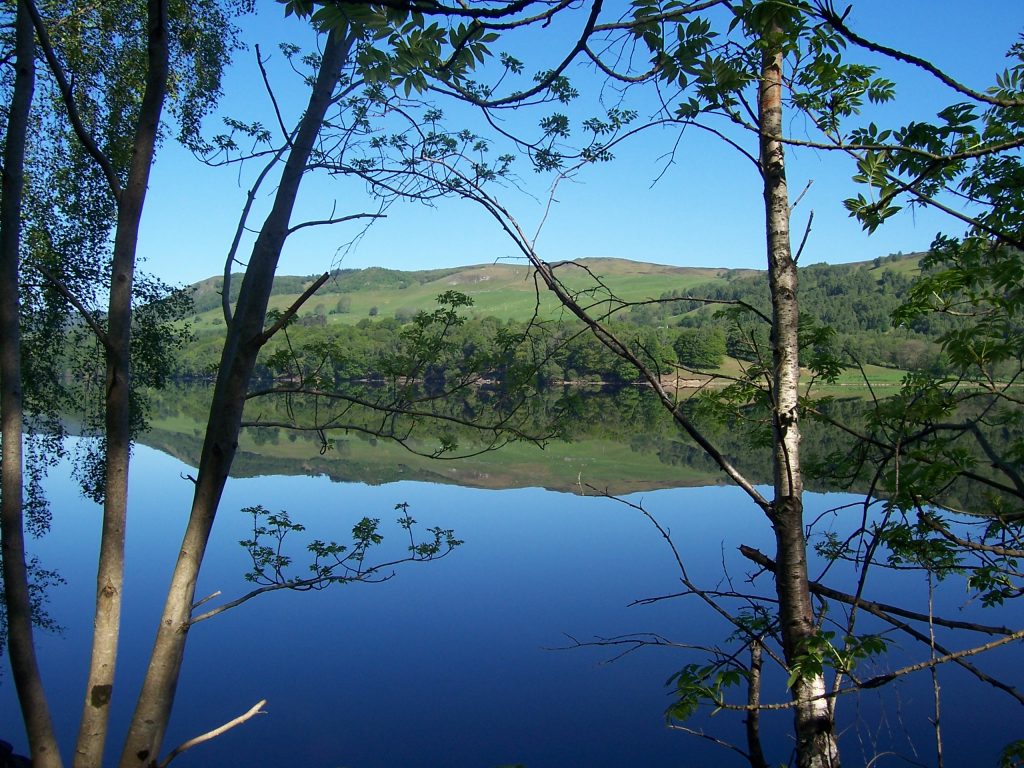 Shortly after reaching Foss, we joined the road that winds its way over the side of Schiehallion – a lovely climb through woodland eventually reaching more open moorland.  From some angles Schiehallion looks like a gravelly pyramid, up which paths can be seen snaking upwards.  Apparently Schiehallion was the site of an experiment conducted in 1774 to try and deduce the mass of the Earth (The Schiehallion Experiment).

Reaching the top of the climb, we paused for a snack bar and a drink before descending. Even though it was still quite early, we were finding the climb rather hot work.  After a lovely swooping descent, we took the turn to Fortingall, where we stopped to look at the famous Fortingall Yew. This ancient yew is thought to be 5000 years old, and is frankly rather decrepit after years of abuse, and it’s now protected by a walled enclosure. This makes it rather difficult to photograph, but I made a stab at it! 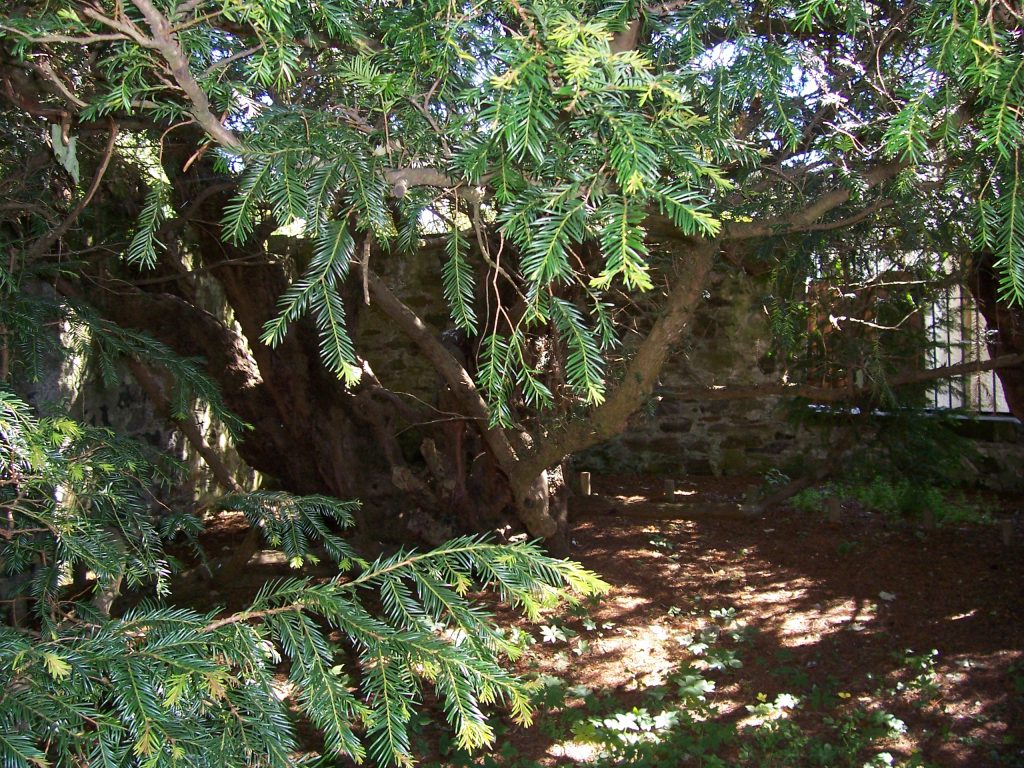 There’s  a rather nice engraved flagstone footpath that leads through the church yard and past gravestones to the yew enclosure, which emphasises the tree’s age.

From Fortingall we pressed on up Glen Lyon. Confronted by roadsigns warning us look out for red squirrels, we kind of pooh-poohed the likelihood of actually seeing any of the beast.  However, shortly after rounding the corner we indeed saw two of them. This was quite nice, because in most of the UK, the red squirrel is being out competed by the introduced grey squirrel.  Unfortunately I couldn’t dig out the camera before the squirrels made off into the trees. 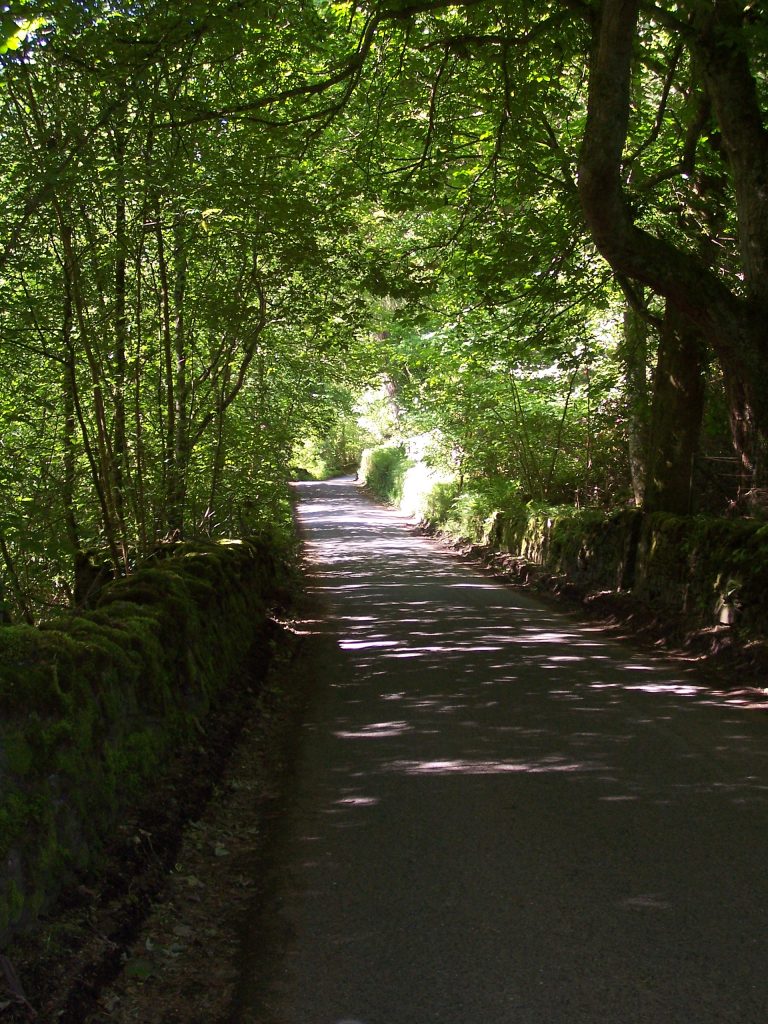 RIDING THROUGH WOODLAND IN GLEN LYON

While very attractive, the road up Glen Lyon is quite undulating, and I was sustained by memories of the tea room at Bridge of Balgie.  My stoker Carol was rather scathing of this, holding that I was just mixing up memories of riding in other Scottish glens! However the tea room did exist, and we tucked in to scones with jam and cream, washed down with tea, while sitting outside in the sunshine with swallows zooming around our heads, and chaffinches pinching crumbs from our plates. We also bought a bottle of chocolate milk, the significance of which will become apparent later.

From Bridge of Balgie, a little single track road ascends the side of Ben Lawers – a delightful climb, and passing motorists helpfully used passing places appropriately (except a twerp in a delivery van that occupied more than the width of the tarmac). At the top, the road levels out and passes a small hydro-electric reservoir.

The descent to Loch Tay was rather steeper, and I had to brake rather a lot, particularly at hairpin bends. This had disastrous consequences just as we were reaching Loch Tay.  At this junction, the road forks and joins the main road rather abruptly.  A few metres from the junction itself, I was braking to stop when…

…the front tyre decided to explode, presumably from braking heat. Somehow I managed to stay upright and bring the tandem to a stop (not easy with the front rim running on tarmac).  We pulled the tandem off the road, and I set about repairs. The rim was far too hot to touch, so we shared the chocolate milk before starting. The tyre was quite badly shredded, with considerable damage to the bead. I booted the worst section with a small piece of tyre carried for the purpose, but had to leave the other. With the tyre only pumped up soft, we pressed on, rather nervously. At this point, we had about 30 miles to ride back to Pitlochry.

A few miles down the road, we stopped at Fearnan to see how the tyre was getting on. It was developing an alarming bulge. We scratched our heads for a while, considering how best to keep the show on the road. Eventually I remembered the now-empty choco-milk bottle. We cut out a section, and used that as am enormous tyre boot.

From Fearnan, we had a pretty uneventful ride via Kenmore to Aberfeldy, where we stopped for a quick drink bought in a store. The tyre was bulging alarmingly, and seemed to be worse that before. We rode on to Logierait, where we rested briefly (and contemplated the worsening state of the tyre) before joining Cycle Route 7 to Pitlochry for the last 4 or 5 miles back to Pitlochry.  This featured several brief climbs, and associated descents (alarming in view of the front tyre!), before entering Pitlochry across a pedestrian only bridge.  Bizarre on a cycle route, but there you go.

We left tyre repairs for the following day, and after getting cleaned up wandered out for a pint and a curry.  All in all, an excellent (if overly exciting) day’s cycling.