Today was a day with many climbs, starting from Lochinver, with the eventual destination being Durness. Unfortunately, as you’ll see, it didn’t work out according to plan – and left us considering what to do with our summer tour.

We began by cycling out of Lochinver in spells of light drizzle, though without any problem with the winds forecast for the following day. Ideed, as the day went on, it got sunnier and sunnier. We cycled up a steep hill out of Lochinver itself, then along an undulating road alongside Loch Assynt, which seemed to be full to the point of overflowing.  Whether this was down to all the recent rain or deliberate action (or indeed whether I’m completely mistaken!), I don’t know. 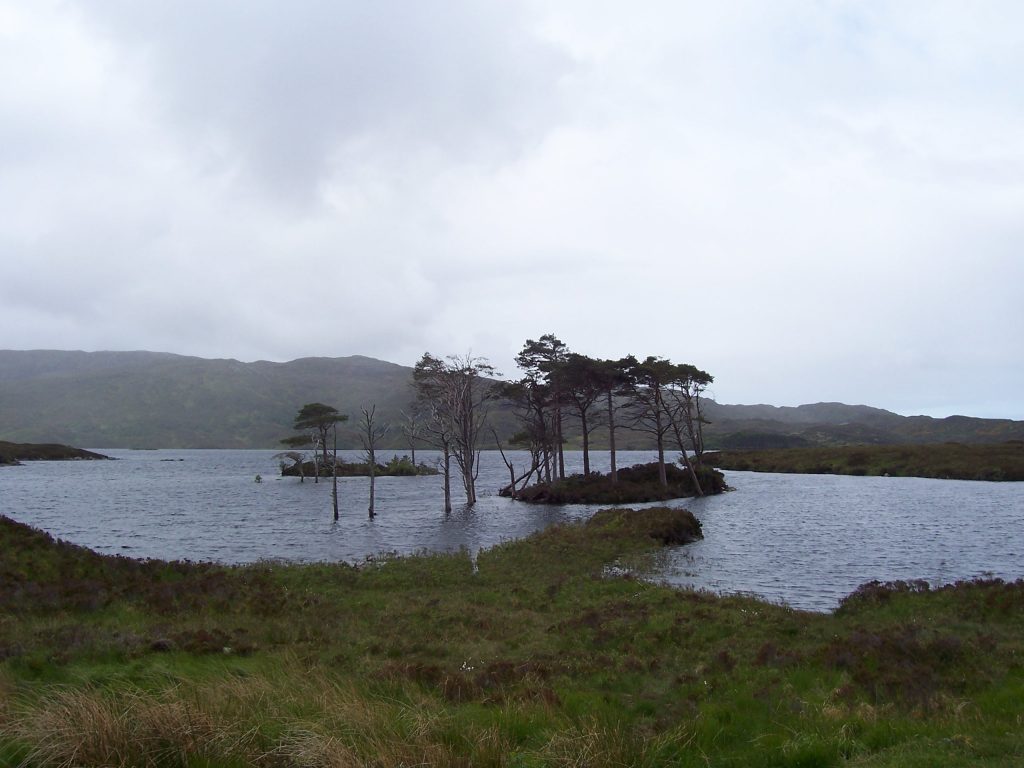 As if to emphasise the interest that the area has for geologists, we passed what appeared to be a group of students from Edinburgh University tapping at roack exposed by road modernisation.  The cycling was quite tough, with climb after climb as we passed many of the frankly astounding Assynt mountains.  In particular, when we took the left turn towards Scourie and Durness, we found ourselves on a really lengthy climb past Quinag.  To be honest, this is the sort of climbing I prefer – long steady gradients rather than the short steep switch-back riding we’d had the day before.  Fortunately, the clouds were lifting as we went on, and we had a nice coffee break beside Quinag, enlivened by the appearance of two cars and two camper vans bearing four pairs of amateur geologists! 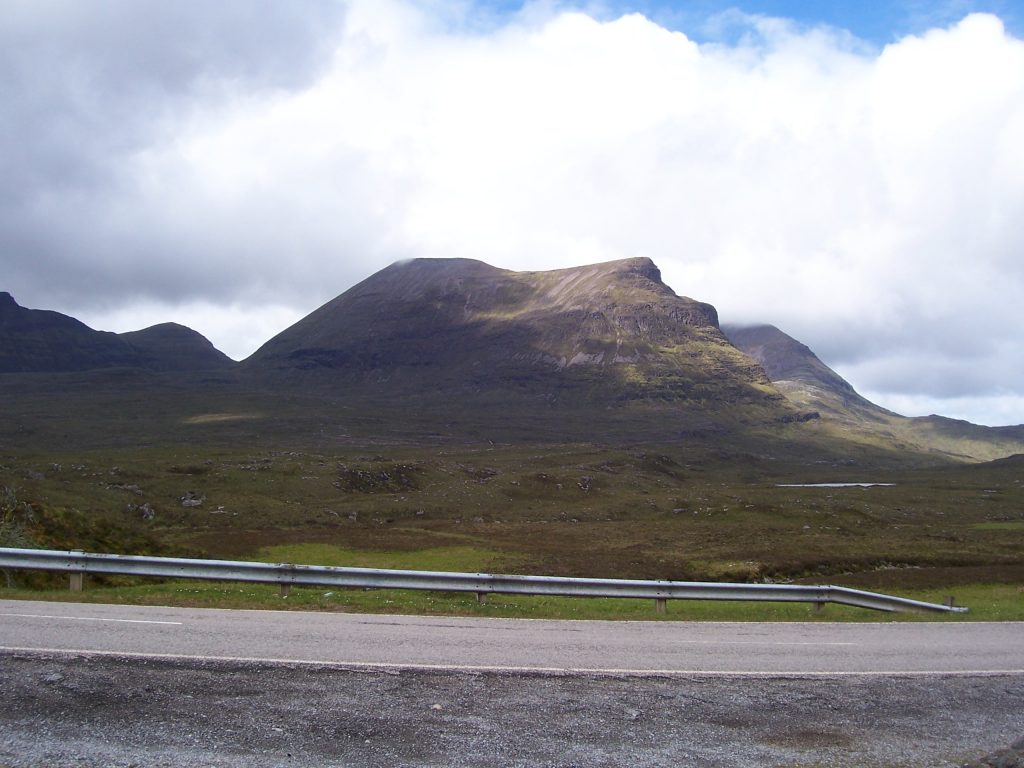 THE VIEW AT OUR TEA STOP!

Pressing on, we passed Unapool and crossed the bridge at Kylescu – this is a modern curved bridge which opened in 1984, replacing a ferry crossing.  On a previous visit, it was so windy that we’d been forced to wheel our tandem across the bridge.  No such problems this time, in fact the sun was out and the gorse covered slopes were gleaming as we embarked upon yet another climb.  We were being videoed by someone as we approached the view point at the top.  I’m not sure why, but this is far from the first time time we’ve been videoed climbing steep roads – perhaps we look like we’re suffering a huge amount!

We stopped for lunch in Scourie, at the cafe next to the campsite.  This made an excellent break, as we tried to figure out whether we’d actually make it to Durness in time for the B&B we’d arranged by phone that morning from Lochinver. Scourie’s got a delightful beach with silver sand visible through clear water in the bay.  There are quite a few B&Bs, and a Hotel.

Shortly after leaving Scourier we tackled a 12% gradient, which caused the tandem to emit all manner of creaks as we grovelled up.  It also proved too much for the rear wheel, as the freehub began to make alarming banging noises.  Clearly, this wasn’t a good thing, especially as the rear wheel had become rather wobbly, and was now rubbing on the frame.  We stopped and unloaded the tandem to get the rear wheel off.

As far as I could tell, the axle bearings were fine, and in OK adjustment.  Grasping the cassette indicated that all was not well – it had far too much movement.  Similarly, the axle allowed quite a bit of movement, more than expected.  I figured that the freehub body itself was broken in some way.  We had a go a cycling further towards Durness, but after a mile or so it was clear this wasn’t a good idea, and we returned, cycling rather cautiously, to Scourie.

By this time, we reckoned the best plan was to get back to Ullapool to fetch the car, return to Scourie to collect the tandem, and get to Thurso (where we knew there was a good bike shop) to have it repaired.

One thing that worried us was the paucity of bus services.  As it turned out, there is one service a day running Inverness-Ullapool-Lochinver-Scourie-Durness, and one service in the other direction.  Not only that, it has a bike trailer (though needing to be pre-booked, and for solo bikes).  We were lucky enough to be in time for the only bus of the day to Ullapool, due in about 45 minutes.  Leaving the tandem beside the Scourie filling station, we waited for the bus, taing with us some of the panniers.  The driver was very friendly, as were the other two passengers, and even delivered us not only to the car park in Ullapool, but right up to our car!

To cut a long story short, we returned in the car to Scourie where we loaded the bike onto the roof rack and found an excellent B&B. By this stage the plan was to get to Thurso for repairs to be effected, and then to rescue what we could of our cycling holiday, probably including a trip over to Orkney.