Another glorious start, though we did see some rain. We left the B&B in what we felt was good time to catch the 9.25 ferry crossing from Ardmhor to Eriskay.  Ofcourse, we hadn’t figured on the stonking climb out of Castlebay, which had us huffing and puffing like Ivor the Engine.  But not before we’d had to stop to persuade the front derailleur to shift the chain onto the small ring.  Then to add further insult, the chain dropped up a gear when we were on the steepest part of the climb – I suggest this as one of the unwritten rules of cycling.

Still, we made it to the ferry with time to spare (though we did worry, and my usually cautious stoker exhorted me to not only go as fast as possible downhill, but to face down oncoming motorists on the singletrack!).  The ferry crossing was very smooth, and we saw a variety of seabirds and quite a few seals lying on rocks.  Eriskay’s a small island, with another beach. It’s mostly famous for the wreck of the SS Politician, which was the basis of the film Whisky Galore.  Apparently the wreck can still be seen at low tide.  Eriskay’s now connected to South Uist by a causeway. 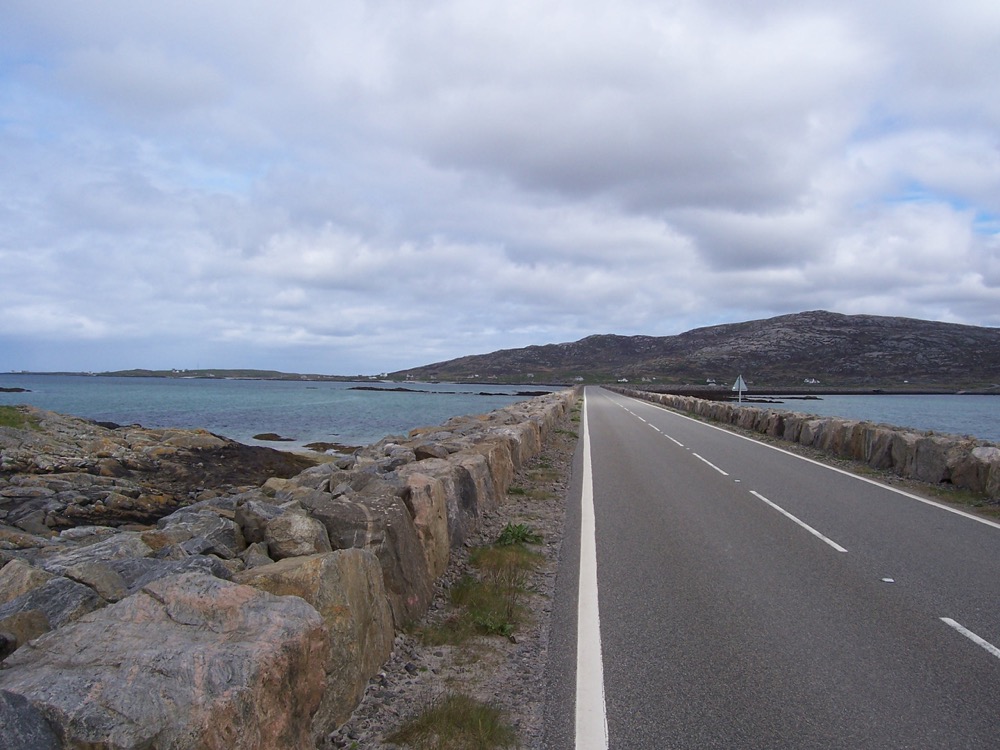 This is the causeway from Eriskay to South Uist

South Uist doesn’t offer much in the way of hilly roads, which was rather fortunate, as we were facing a rather stiff northwesterly wind.  At around noon, we stopped to cook up some food (chili con carne and rice) on the trusty Trangia, and shortly after this, we encountered a light shower that lasted for about half an hour.  This wasn’t a major problem – we soon dried off!

By the time we reached Benbecula I’d acquired an irrational need for banana-flavoured milk.  At Clachan (where the road to Lochmaddy splits off), there’s a shop – but unfortunately no banana milk!

We rode on over a changed landscape.  Rather than riding between small lochans and over causeways, we rode up over peat moors, with small lochans shining deep blue under the sunny blue skies.  There’s a site with the remains of a chambered cairn just off the road – we stopped to visit that on day 4. 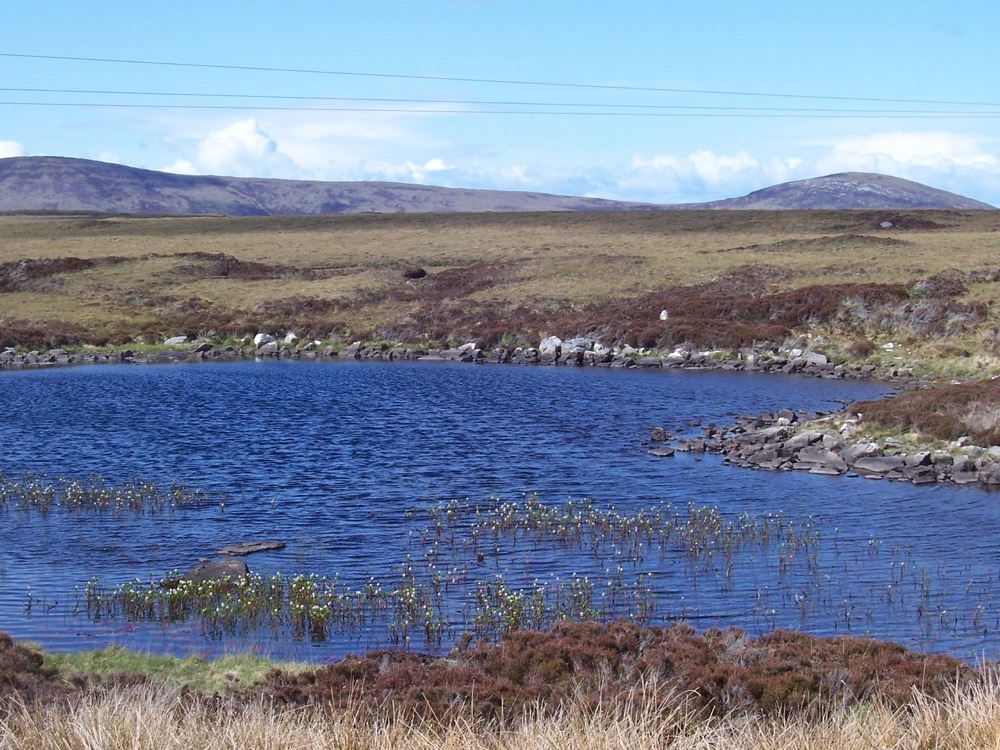 The landscape in North Uist begins to be rather higher, with glorious blue lochans – brown and blue predominate 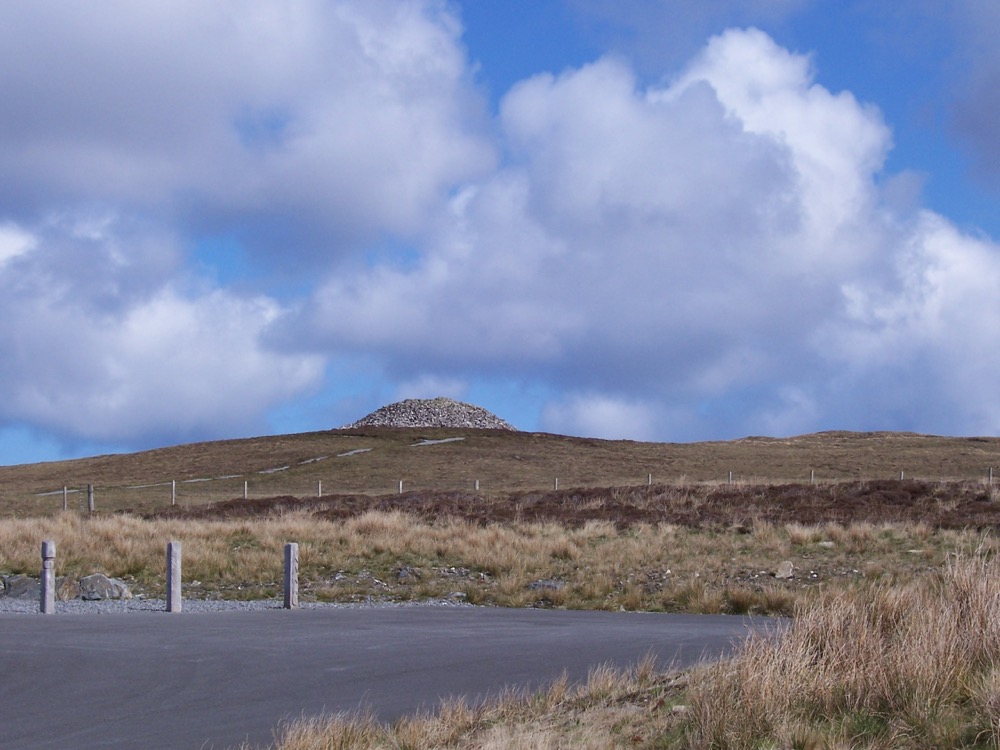 The chambered cairn from the roadside (see day 4)

Finally we arrived at Lochmaddy, where we’d booked two nights in the Tigh Dearg Hotel. In actual fact, there was a reason I’d settled on the Tigh Dearg.  In past tours. we’d visited Lochmaddy and found accommodation in rather short supply, and we had on a couple of occasions stayed in the Stag Inn guest house.  Unfortunately on a subsequent visit, we found the Stag Inn had burnt down.  A couple of years ago, we stayed in one of the few B&Bs in Lochmaddy and noticed that a new, red, hotel had appeared.  We merely visited the bar on that occasion, but it was enough to suggest a proper visit.

Lo and behold, the (very smart) room had a bath 9so much better than a shower), and sfter getting cleaned up, we retired to the bar for a couple of pints and a bar meal.  I had fish cakes for starters and baked lanoustines on egg noodles for main course.  C had fish pie,  Desserts wer Eton mess for me and sticky toffee pudding for C.  Then to bed after watching the rather alarming weather forecasat for Thursday.  It looked as though we’d be stuck indoors watching heavy rain…