35.6 miles
We woke to beautiful sunny morning, and enjoyed the breakfast room’s view out towards Kisimul Castle in the bay.  We got set up, planning to spend the day exploring Barra and Vatersay – we took the Trangia and the bits’n’bobs for a drum up and lunch.  Fortunately we also packed some extra clothing, – as  it tunrned out, the temperature dropped steadily through the morning, as the cloud grew ominously (consistent with the last weather forecast we’d seen which was for light rain).  We’d hoped to have a brewup on the beach at Vatersay, but contented ourselves with a stroll – something repeated during the other beach visits today!   We stopped to look at the memorial to the loss of the Annie Jane and its 350 emigrants which  foundered off the coast of Barra.

The beaches on Barra and Vatersay are nothing short of splendid, as are the dunes behind, with displays of primroses and many other flowers, though the yellow flag irises had yet to bloom. 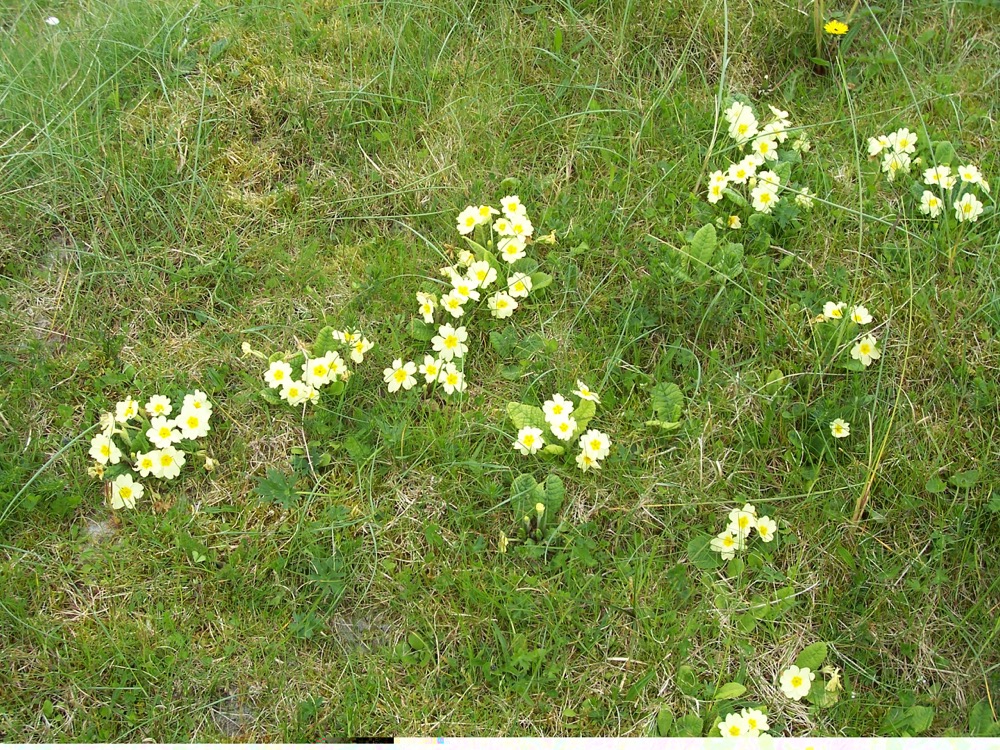 Primroses were found everywhere, but especially on the dunes

Here’s a typical beach scene from the islands of Vatersay and Barra- brilliant silver sands…but unfortunately rather overcast! 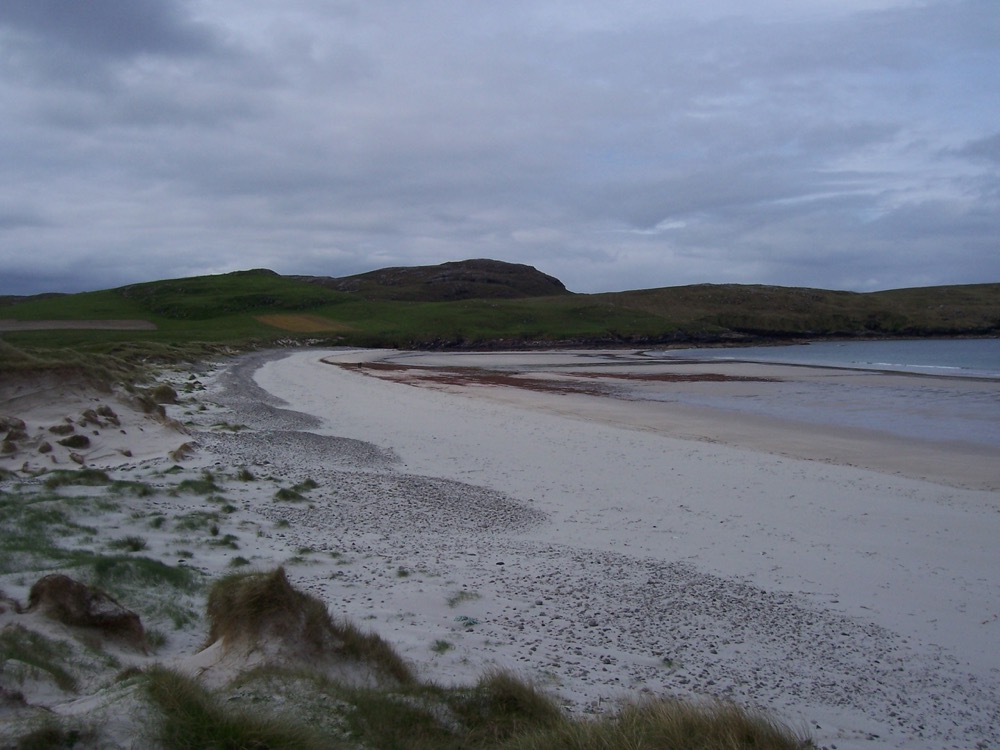 A little later, we came across the remains of a WW2 Catalina sea plane, which had crashed in 1944 during a training flight from Oban with the loss of three of the crew.  There is a litle more information here. 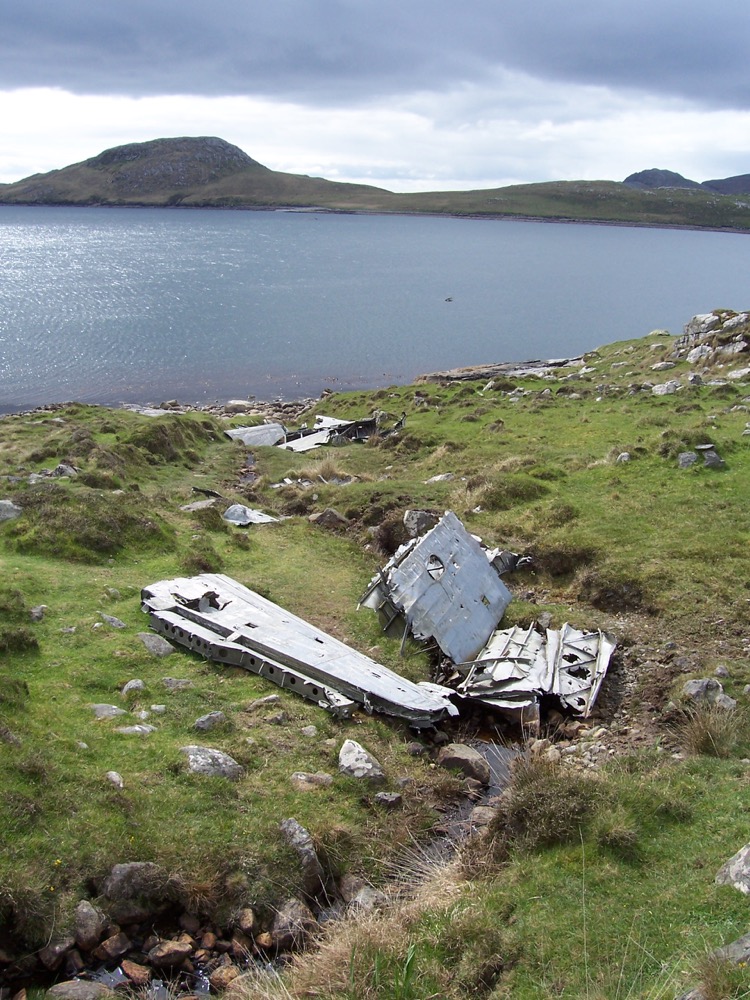 Remains of a Catalina flying boat remain on the hillside

From Vatersay we retraced our path back to the B&B, then on to the main circular road round Barra.  This proved delightful, if still quite cold and windy – the clouds seemed to be breaking up.  We stopped occasionally to admire views and beaches, but still felt too cold for lunch.  At the north of this loop, we turned north, investigating where the Ardmhor ferry terminal was so we had an idea how long it would take to get there the next morning, then on to the Barra airport – the landing strip is the huge Cockle Strand beach. This means that the airport is one of the few in the UK where the timetable is dependent on the tides! 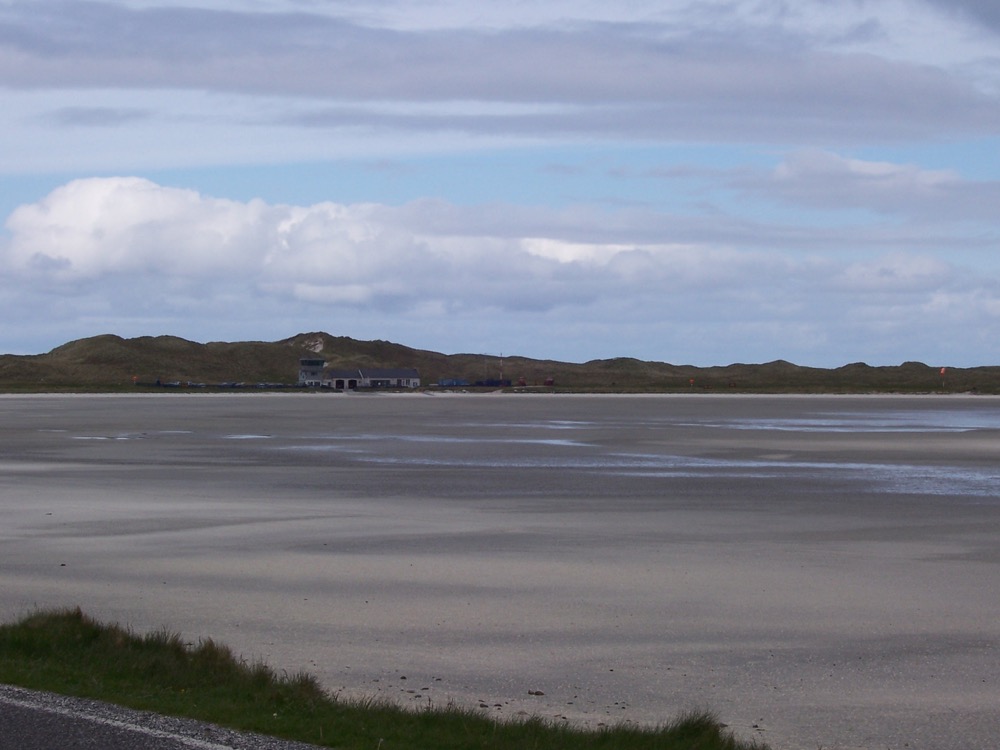 We stopped for soup and tea at the cafe in the terminal.  This was most welcome as we were pretty cold by then!  The terminal building itself lies alongside the road in a narrow isthmus – to the western side is yet another beach of fine silver sand. 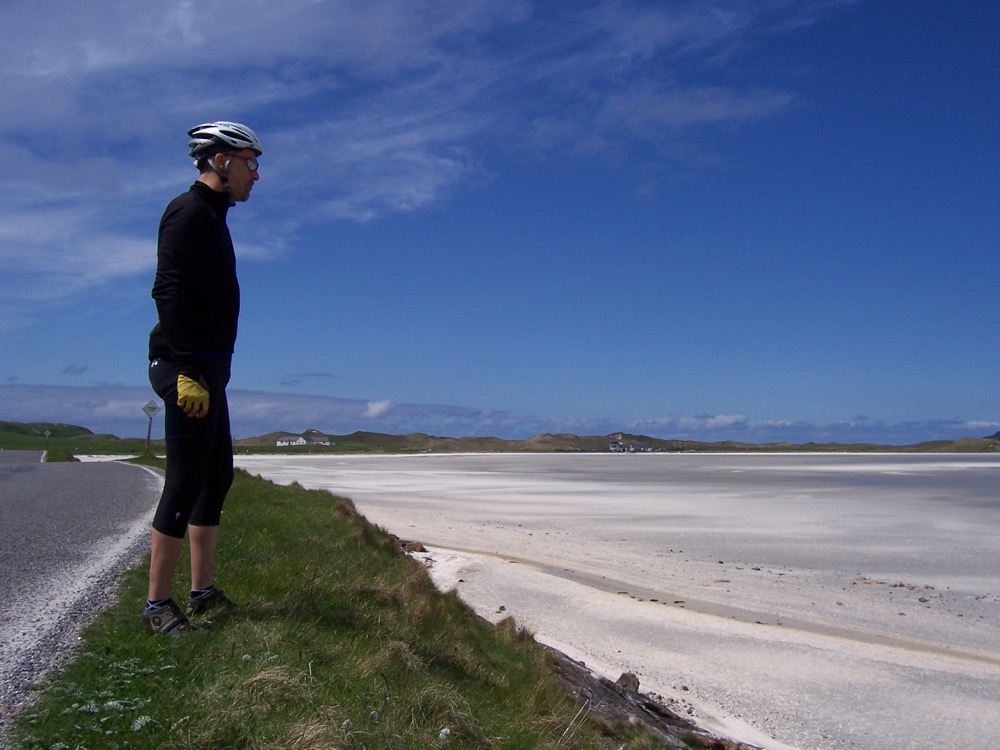 We rode rurther north to Eoligarry, where we walked onto a rocky beach (a bit of a change from sand!) with terrific rock pools.  From there we retraced to the circular road and headed back to Castlebay, pausing occasionally to admire the views – the Cuillins in Skye were clearly visible.  We could also see the rather lengthy climb we were to face immediately after breakfast the next day, as we made for the Ardmhor ferry terminal! 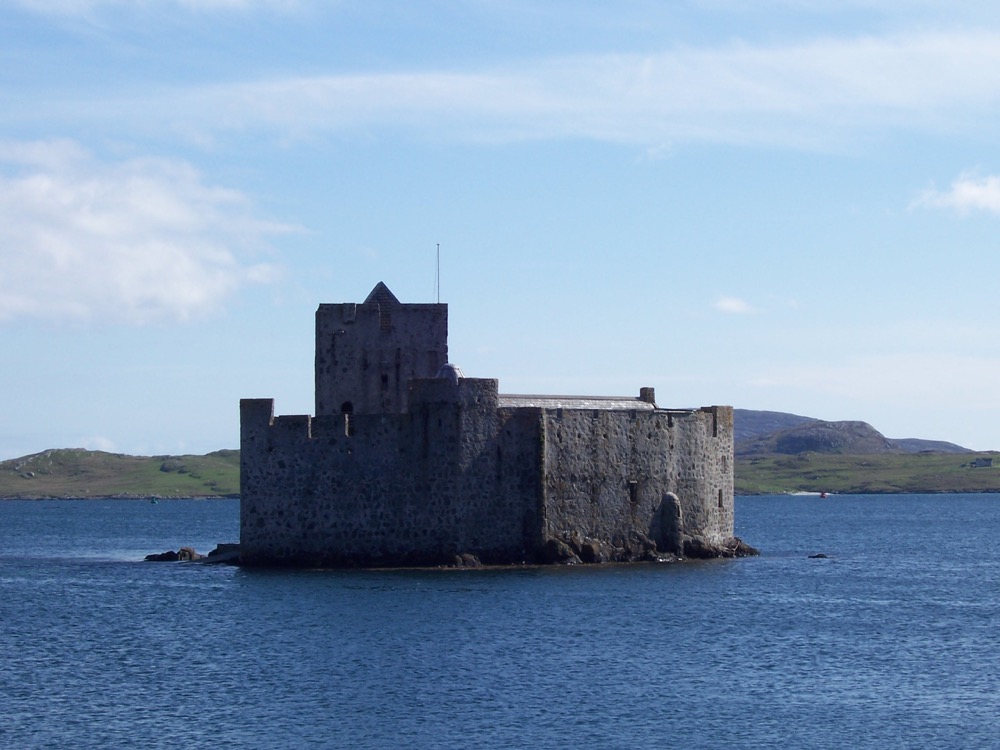 Back in Castlebay, we changed, had a cup of tea, then wandered into Castlebay.  We photographed Kisimul Castle from a number of vantage points (apparently Castelbay was the model for Kiltoch and Kisimul for the Black Island in the Tintin book The Black Island).  A fabulous pint of McEwans 80/- in the Castlebay Hotel bar was followed by dinner at the Cafe Kisimul, which specialises in Indian, Italian and seafood.  I had scallop pakora and spaghetti marinara (combining all the specialities, I thought) washed down with a bottle of Hebridean Breweries’ Islander ale.  Carol had the same starter and followed with Jaipuri prawns.

Then back to the B&B.

During the course of the day, we saw loads of birds, including many we couldn’t identify – skylarks, herons, hooded crows.  Many starlings.  We heard cuckoos, as one so often does out here, but never saw one.