I’d entered this event on the back of a recent 55:40 at the Finsbury Park CC ’25’ on the F1B/25 – I hoped to do a decent ride on a quick course. Of course, after Alex Dowsett’s storming ride on the E2/25 earlier this year, the course is very popular, and it wasn’t a huge surprise not to make the startsheet. On the other hand, I’d ticked the ‘Reserve’ option, and so I ended up as 8th reserve. The day before the event, with the weather forecast looking decidedly iffy, I was slotted in the field in place of number 120. Probably the only occasion I can recall riding #120! I travelled over to the event with James, one of the newer NBRC members (he’s also rather quick at time trials).

After signing on (and in James’ case, borrowing a front skewer!), we drove to nearer the start to get set up and ‘warm up’. I thought the wind was going to be a bit of a headache – it was going to be pretty much a head wind on the way out, and the question was really how twitchy would it make the steering. Here’s a screen grab from the very excellent MyWindsock.com showing the conditions for the event. 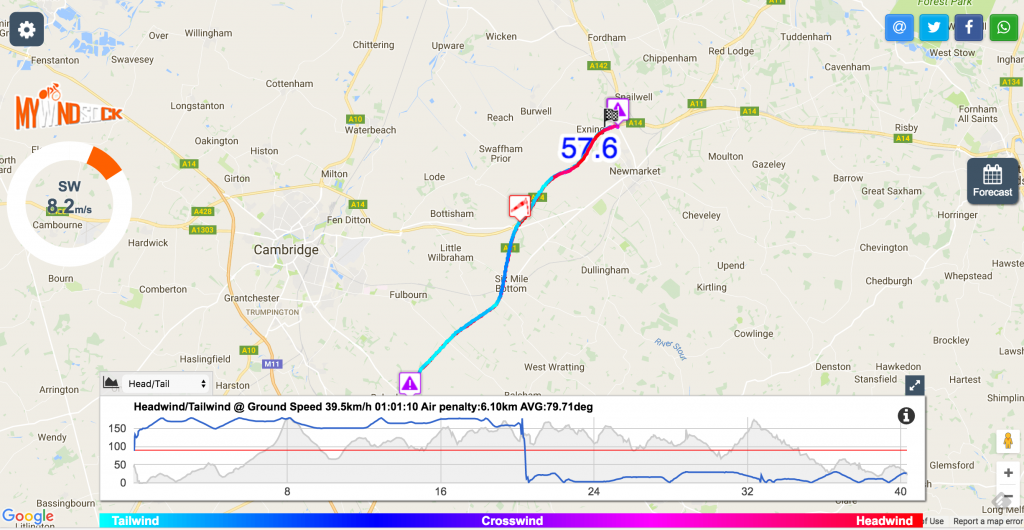 Weather conditions for the event – from MyWindsock

At the line I could barely hear the timekeeper call numbers because of traffic noise and the wind. And there seemed to be a fair number of DNSs. Rolling down the sliproad, things were OK, I got into a nice big gear and quickly got up to speed. Out on the main road, things were a bit different. The wind wasn’t just strong, it was pretty blustery and, with a lot of side to it, made grappling with the steering a bit of an imperative. Indeed, there were several points where I couldn’t use the aero extensions. Despite that, there were several places where my speed seemed unaccountably high (sadly not frequent enough). Eventually the marshal at the turn sliproad came into view, and with considerable relief I got off the dual carriageway. Unfortunately I got stopped by traffic at the turn roundabout. But back on the main road, what a relief! The roaring tailwind was phenomenal, and I did miss my big chainring (my current chainset is a measly 53/42). I was mostly motoring back to the finish at >30mph, and even saw speeds of 35mph at times. By now, the visibility through my visor was getting a bit poor, though there didn’t seem too much spray on the road. I just hammered away, wanting to get finished as soon as possible. I finished with 56:08, not too shabby given the conditions.

Back at the car, I found James, who I think had found his deep rim front wheel rather too much and had packed. Getting changed out of a wet skinsuit and sorting out the bike was horrible in the by now pouring rain, but eventually we were able to get back to the race HQ for a coffee. Incidentally, this was the first event I’ve been at where there were dope testers, and they were at the main door of the leisure centre, looking for the last riders on their list.