This event was held on the F1B/50, and was my first ’50’ for a few years. It was also a lovely morning, though a bit chilly at the start – it was enough for me to put arm warmers on, though I later regretted that as conditions warmed up during the race.

I’m pretty familiar with the course, so no surprises there. I didn’t have too much in the way of problems at roundabout, just one or two slight delays. I was caught for 3 minutes by #40 shortly after the first turn (about a quarter of the way through), but I later saw him wheeling his bike with a front wheel puncture.

I had my minute man in my sights for much of the race. He seemed to be connected by a long piece of elastic – he was far better at picking lines through roundabouts, as every time we traversed one, he pulled away from me a little.

I reckon I paced this event quite well, and it was only over the last couple of miles that I felt myself to be flagging. In the end, I was placed 16th, with 1:57:25. 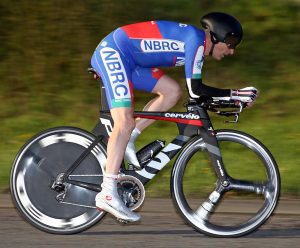 At the first turn…