The Port Talbot Wheelers 2-up ’25’ has been a regular fixture on the Team Grumpy calendar for a number of years. As usual, the two evenings prior to the event were characterised by conspicuous consumption of Leffe and curry. This was an acceptable preparation, since both members of Team Grumpy had seen their pre-season training somewhat derailed by illness. We also avoided any serious bike tinkering on the day before the race. Indeed, the only issues needing dealt with were (a) Gerry’s disc wheel needed to be replaced with his trispoke owing to braking issues, and (b) my left shoe wouldn’t clip onto my pedal. This turned out to be due to tiny fleck of mud in the shoeplate springs! Pretty quickly all was in order.

This year’s event was held on the R25/25, which runs down the A465 dual carriageway from Resolven to its first turn at the Tonna roundabout, back up the A465 past the start to turn left down the B4242, turning at Ynysygerwen to finish some way past the Resolven junction. Usually the dual carriageway section is quickest, with the B4242 being quite slow, owing to its hilly nature.

The morning of the event was pretty cold and bitter, despite being far from frosty. But with long sleeved thermal vests under the skinsuits and decent gloves, we were pretty much set. New kit this year included new aero hats and the addition of Nopinz number pockets on the back of our skinsuits. The Nopinz pockets seem pretty good, though getting the number in place is a bit fiddly. No pin damage to expensive skinsuits, though!

After a brief warmup, we lined up and were off. Though not before an unfortunate wobble made me think we’d collide. The outbound leg to the first turn was very quick, with a stiff tailwind. We’d planned for me to take some long pulls at the front to avoid Gerry’s breathing issues in the cold air – as it turned out, I think I took longer turns at the front throughout the race, Gerry still suffering the aftereffects of his recent cold.

All too soon, we reached the first turn, which we rode in good style, and set off back up the dual carriageway into the headwind. For most of this leg, this just slowed us down, but for the last two miles or so, I found my Hed Stinger a bit of a handful. No real difficulty or danger, though. Round the second turn and we joined the hilly road southbound. This part of the course features some shocking road surfaces (on at least three occasions, I heard Gerry grumping about some hole or other that he’d cycled through!), and some pretty stiff climbs. We made good progress to the third and final turn before heading back to finish in 1:03:16.

We weren’t too disappointed with the time – it’s a tough course, and anyway, our 2-up technique was pretty well oiled throughout, with both riders making appropriate accommodation to the strengths of the other. In any event, we were 15th team out of a full field of 60 teams (only three teams didn’t start), and won third composite team. 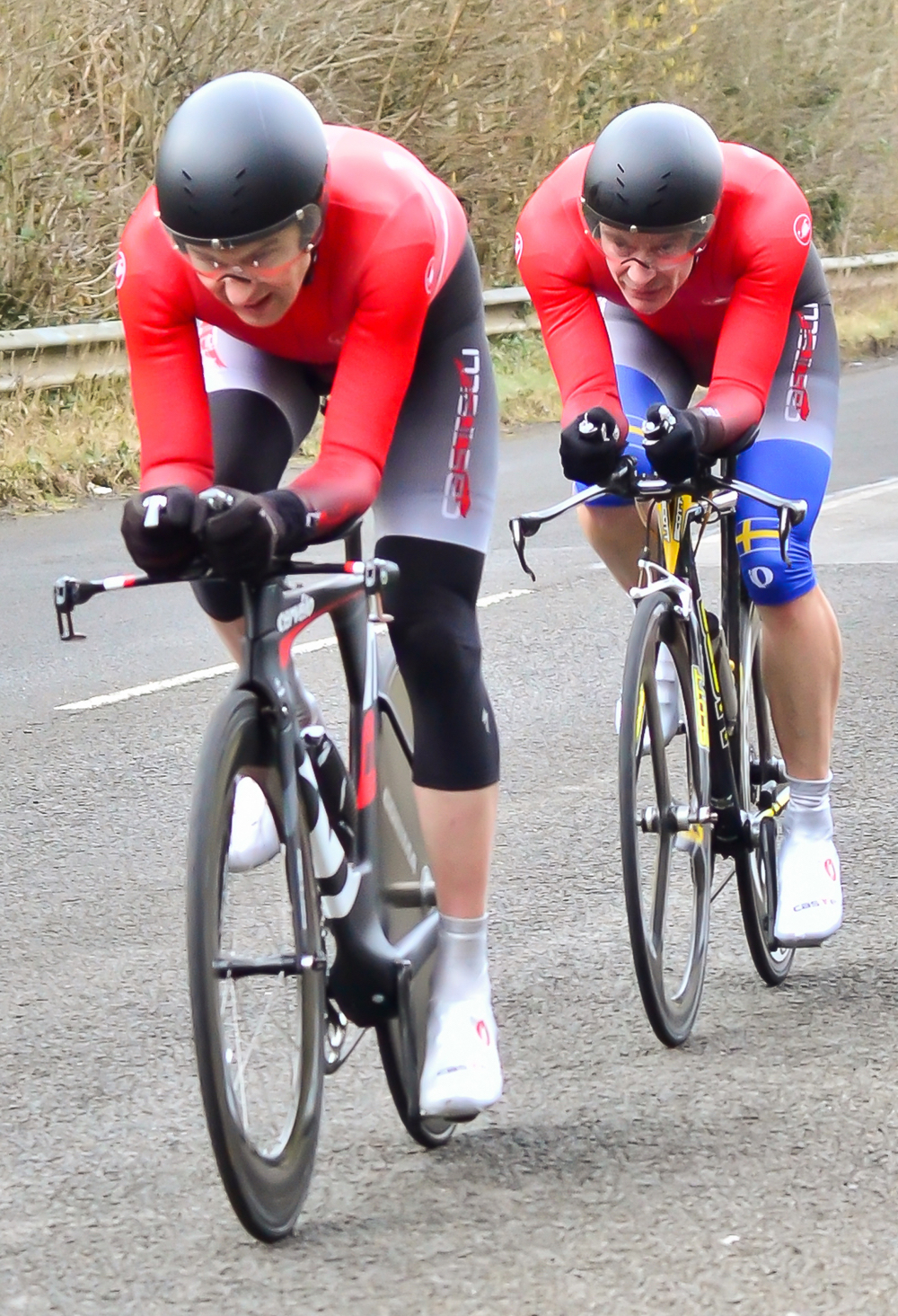