My first open event for some weeks, mostly due to personal commitments and a seeming paucity of events in London North. The organisers were using the Sandy Sports Centre as the race HQ, which is a bit slicker than the traditional HQ over at Tempsford, but a bit further from the race start. It was a pretty good morning – quite warm, but not as humid as of late, and with a gentle 7mph wind from the northwest that promised to be a headwind on the longer northbound leg. This was to be the debut of my new TT bike, a rather extravagent purchase of a Cervelo P5!

We had around 64 riders on the start sheet – I was #46 with the scratch rider at #70. The numbers didn’t correspond to start times in the usual way, which may have contributed to three late starts! I wandered over to sign on and collect my number before returning to the car to set up my bike. I was using my old Hed Stinger 90 front and Corima disc rear, both with Conti tubs (though the Stinger had a more budget tub than the disc wheel!), so no power data were to be collected.

The organisers counselled that one should allow 15 minutes to reach the start. Just before I went, Richard M. returned with a flat tyre, complaining of glass on the road (shortly after, he and his Bossard team mates set off to the start by car). I rode over to the start, and I think 15 minutes was about right though I’d been cautious and made sure I arrived with plenty of time.

I was amused to see they’d crossed out one chalked out start line and replaced it with another about a yard further forward. I remain unconvinced it would make any real difference! I set off rather more sedately that usual for a couple of reasons – firstly, I was still getting used to the feel of the P5 when using the base bars, and secondly it always seems a bit of a waste of effort in the drag up to the Tempsford flyover. I was already finding the position on the P5 just about right, and the TT saddle I’d fitted was very comfy. I came off the tribars for the miniroundabout, then shot off down the sliproad to the A1.

I felt pretty good from the get-go, and cruised on towards the Sandy roundabout. This bit undulates a bit, but I kept a good speed up. Off the tribars once again to circle the roundabout then off north with that gentle headwind. I made pretty good time along that leg, catching several riders. I did have an anxious moment at the Black Cat, but other than that, the traffic flow was light, and I had no hassle. 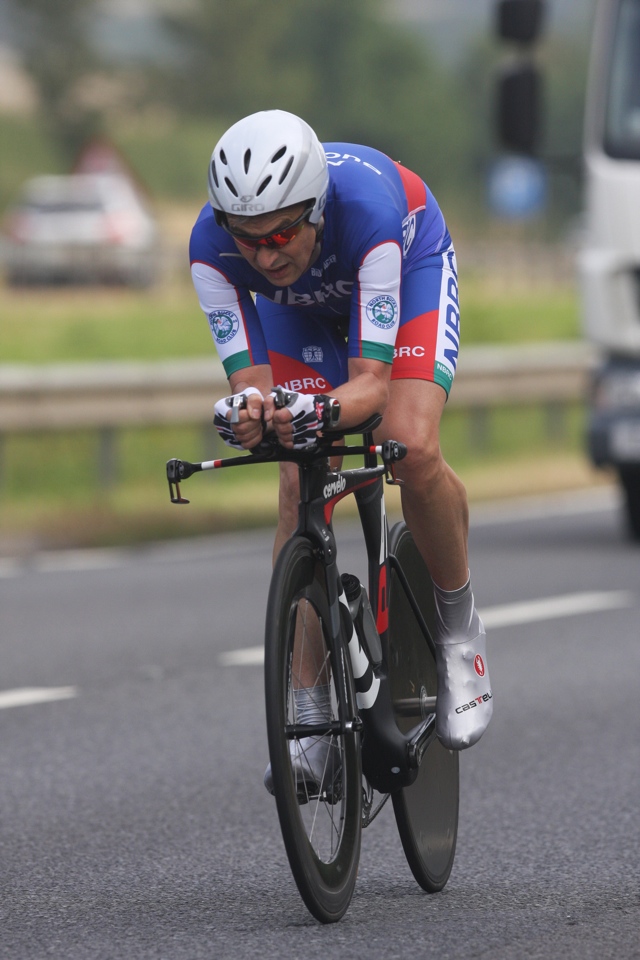 On the F1/25 in one of the last events to use this course. (Photo: Steve Wells)

Shortly after the Buckden turn, I caught my minute man. I’m always a bit careful when catching a seeded rider, just in case I blow up and get passed again! This time, everything was OK, though it did take a long time for him to disappear behind me. 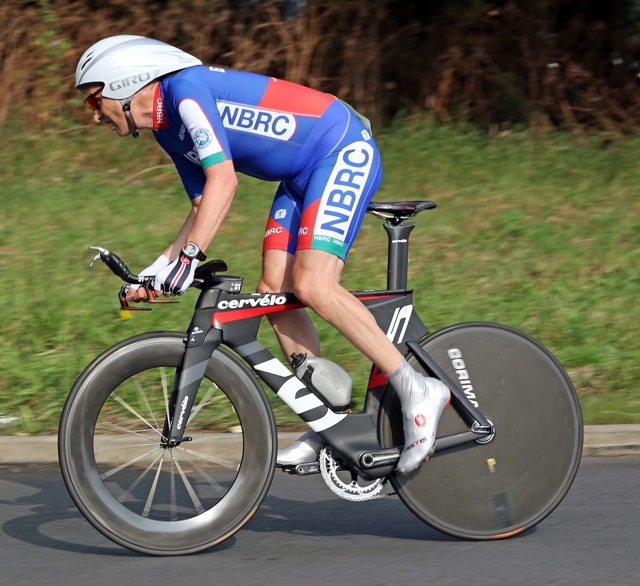 The southbound leg was supposedly wind-assisted, and felt pretty good. My speed was wobbling a bit, presumably dependent on the drags and the amount of shelter afforded by trees etc. I came through the Black Cat and passed another pair of riders before finishing.

While riding, I’d felt comfortable on the bike and I was aware that I was rideing better than I usually do on the F1/25. It was rather warm, and I was sweating quite a bit. I glanced at my Garmin as I crossed the line – it was showing 56 something. So I reckoned I must have done a 55, as I start the timer as my minute man starts. I must confess to having been a little unsure of this – I have trouble reading the digits on the display, and I also failed to turn off the timer. So I puzzled about it on the way back to the HQ. I got back to the car, surprising Carol who thought I’d got back so quickly I mustn’t have finished the race!

I finished in 55:42, good enough for 5th place (out of 48 riders who’d finished). This is my fastest time on the F1/25 for several years, and I just wish I could understand why things sometimes just ‘click’ (though I have upped my training since April).

I found the new TT bike really excellent – it’s set up just about right, and the saddle makes quite a difference (I tend to slide forwards on the SLR on the P3). On the downside, the matt finish of the frame really does show the streaks of sweat!