I have recently been playing around with using Raspberry Pi devices as streaming music players within a Squeezebox-based system. I’ve arrived at quite a comprehensive arrangement, which includes a Pi as a player: 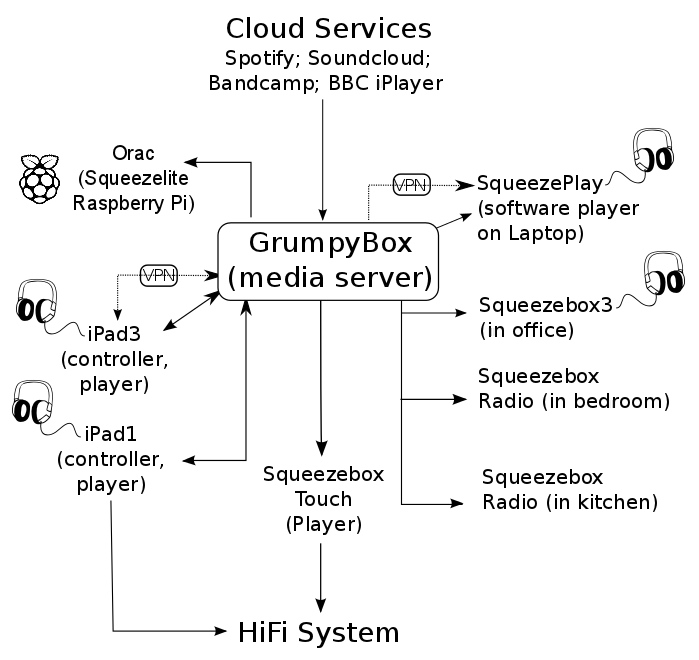 This is a rough illustration of my current implementation of a network of Squeezebox players linked to a NAS (GrumpyBox) running Logitech Media Server (LMS). It consists of several Logitech Squeezeboxes, a couple of iPads that are playback-capable through apps such as SqueezePad and iPeng, and the software Squeezebox emulater, SqueezePlay. To this I have recently added a Raspberry Pi running piCorePlayer. I also have a second Raspberry Pi running Squeezeplug, which has its own instance of LMS (not shown in the diagram).

I’ve summarised the usage cases of the three setups I have tried in the table below. My opinion can be summarised as:

For both the Raspberry Pi based devices I use, you do need to think about how you interact with them. I use the LMS web interface (usually found at http://IPaddress:9000) with a laptop, or one of the many tablet or smartphone apps that are available (such as the afore-mentioned SqueezePad and iPeng).

Groklaw to stop publishing on May 16th