When the Raspberry Pi was announced a few years ago, I was rather attracted by this low power but very flexible educational computer but never bought one until recently, when I fancied having a bit of a play with setting up a Raspberry Pi as a Squeezebox player.

After a bit of a sidestep in the ordering, I ended up with the following:

The SD card that came with the Raspberry Pi had the NOOB collection of operating systems. However, I began by overwriting the SD card with the piCorePlayer 1.12a image. I connected the Raspberry Pi to my router with an ethernet cable, and booted it up. Booting piCorePlayer takes only a few seconds. Connecting vis SSH was trivial with Terminal on the MacBook. Recent piCorePlayer releases include a rather nifty web page based configuration system, so it really didn’t take long to set up the connection to the Logitech Media Server, rename the device, and set up the audio via the spare USB port to a small Cambridge audio DacMagic headphone amp. Here’s a quick snap of the device with ethernet connection to the left and power supply to the right with the SD card protruding. You can see the WiFi stick to the left, next to the ethernet connector. 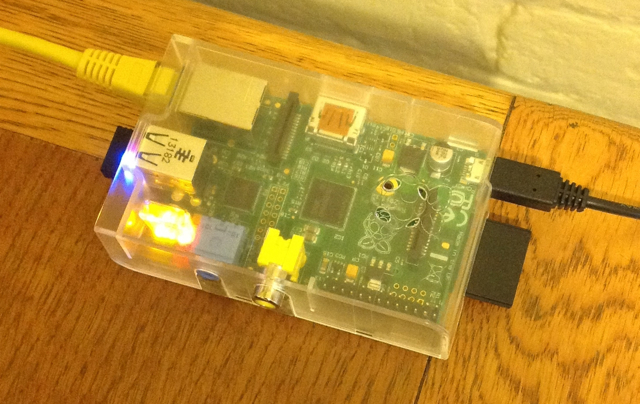 PiCorePlayer successfully saw the Wifi network. I entered the SSID and password, but the wifi stick resolutely refused to play ball after a reboot, leaving the device uncontactable except via ethernet. I subsequently investigated reviews of the Wifi stick I’d chosen. Turns out that the thing won’t work with piCorePlayer, but will with Raspbian. Ho hum! I then ordered an Edimax device, which I should have done in the first place.

In use, the Pi seems to work well, and plays audio robustly, no pops, clicks or other audio artefacts. In its transparent case it looks quite attractive in a 1970s Blake’s 7 budget SciFi kind of style, what with the various flickering and flashing LEDs.

A couple of days later, the replacement WiFi stick arrived. By this time, piCorePlayer version 1.12c was released. I reflashed the SD card, and repeated the setup routine. I also expanded the second partition to fill the rest of the SD card. This should allow me to install further extensions to piCore. The Edimax WiFi stick does seem to play ball with piCorePlayer, which can now take up residence next to the HiFi. I note that selecting the correct ALSA parameters for the external DAC is important to avoid pops, clicks and other audio degradation. PiCorePlayer’s web interface makes setting up the audio (and Wifi) very easy and straightforward.

I have a HiFi Berry DAC card in transit. I have also soldered up an expansion board for a 2 x 16 LCD display.

Is the iPad a Personal Computer?
Author archive