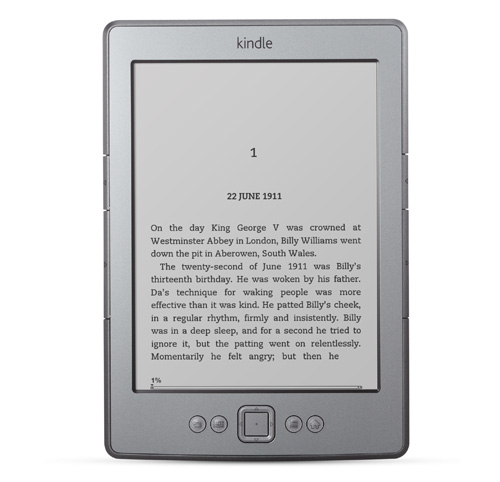 Perhaps it’s something to do with the change in focus at the end of the racing season, but I’m often tinkering around with tech stuff in the autumn!  Anyway, I’ve just taken delivery of one of the new Kindle e-book readers from Amazon.  This model is one of several devices being launched by Amazon over the next few months, with the others apparently being a touch screen Kindle and the Kindle Fire – an Android-based tablet that promises to shake up the tablet market.  The new Kindle is usually referred to as the Kindle 4 (though Amazon seem to just refer to it as the Kindle) and differs principally from the previous model (the Kindle 3, now renamed Kindle Keyboard) by the absence of the tiny keyboard and audio playback facility.Anyway, my initial response to reading the specs of the Kindle 4 was one of disbelief: why would anyone pay for a Kindle with reduced specs – half the memory, half the battery life, no keyboard, no charger?  In fact it still has the capacity to store over a thousand books, the battery life is still 1 month, and the on-screen keyboard (operated by the five-way central button) works just fine.  I guess the expectation is that users either already have numerous USB chargers kicking around, or will just charge from a computer’s USB port.

The front buttons are, from left to right: Back; Keyboard; the 5-way select button; Menu; Home.  These provide the familiar functions as on previous models.  On the bottom edge there is a press-button on/off button that turns the device into standby mode (this is a slide and release switch on the Kindle 3) and a tiny USB socket.  It’s to Amazon’s credit that this is a standard USB socket – it’s one of the smaller varieties, micro-B.  I get rather frustrated by the profusion of proprietary cables – I have so many kicking around, including two different types for the old iPaq PocketPC, the iPod/iPad cables and the Cowon one for my music player.  Page navigation is via the forward and back buttons found on the right and left edges of the device.  These are in the same location as on the Kindle 3 though subtly different in shape and action.

The screen is the same excellent electronic paper display as used on the Kindle 3, with a 16-level grey scale.  This is surprisingly good at displaying images.  The Kindle 4’s firmware differs from previous models in it’s screen refresh mode.  In earlier models each page turn happens via a ‘blackening’ of the screen.  I know this bothers some people, and perhaps that’s why Amazon implemented a different screen change system in the Kindle 4 in which a complete screen refresh only happens every six or so page turns.  This makes page changes quicker at the cost of gradually degraded resolution.  I downloaded and installed a firmware update that offers the ability to toggle between screen modes.  On a bit of testing, I’ve stuck with the new screen refresh mode, as I don’t notice any issues with the display when I’m absorbed in reading.  This is the first electronic paper display I’ve used, and the thing really is startlingly crisp and easy to read – much better in many ways that my first generation iPad.

The case is quite similar to the Kindle 3, but the bezel is a slightly lighter grey.  The back of the unit has a slightly rubbery texture.  Overall, the device feels (initially at least) to be a bit plasticky, with the pretty much matte texture of the screen.  But these are first impressions, largely by comparison to the heavier aluminium bodied iPad, and in use it’s pretty clear that the Kindle is rock solid and robust.

The Kindle is hooked up to an Amazon account, books are delivered via WiFi (there isn’t a 3G version) – or can be copied via the USB cable.  As with previous models, pdfs can be read either by copying the file over via USB or by conversion to Kindle format by some arcane email-mediated communication that I’ve not tried.  The Amazon account shares ebooks between the Kindle and the Kindle apps running on my iPad and my MacBook, and synchronises where I am in each book.

Some comparisons:  the Kindle is far superior as an e-book reader than the iPad, though it has to be said that in overall capability the iPad is of course a more versatile device.  This is largely because of the screen quality (for example it’s excellent for reading in bight sunlight) but also the Kindle’s form factor  scores pretty highly.  It’s very light and easy to operate single-handed, for example when lying in bed (where I do most of my recreational book reading).

There is a sense of handing over one’s reading to another ‘walled garden’ as one does with the iOS software ecosystem.  Having said that, there are options by which files can be converted between e-book formats (the Kindle reads Kindle (AZW), TXT, PDF, unprotected MOBI, PRC natively; HTML, DOC, JPEG, GIF, PNG, BMP through conversion).  Most e-book reader websites advocate software such as Calibre, which offers e-book library management and the facility to interchange formats.  I’ve installed this on Mac and Linux, and it seems pretty straightforward to use.

Chez Grumpy gets a new router