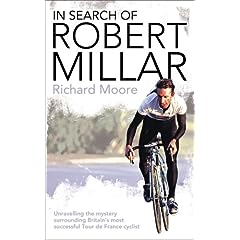 When I became interested in cycling again in the late 1980s, Robert Millar was for me the big name in the professional peleton. Only being peripherally involved in cycling at that time, I was really unaware of the Millar’s full career at that time. Richard Moore has written an excellent account of Robert Millar’s rise from Glasgow club cyclist to arguably Britain’s finest professional road cyclist.

Richard Moore is himself a former racing cyclist, having ridden for Scotland on at least one occasion – this background understanding helps illuminate the book, but (fortunately) does not make this purely a cycling book.

Robert Millar was (and remains) a rather inscrutable individual. Through his career, he was unwilling to court the limelight, preferring his actions on the bike to speak for him. In keeping, he appears to have offered virtually no assistance in the preparation of this book. Indeed, the only direct quotes from him related to the biography are in the email exchange presented as a postscript, in which the author manages to penetrate the shroud of mystery Millar has built up around him in his retirement.

Despite this, the biography succeeds in painting a detailed picture of the man, warts and all, by talking with many who have raced and working with him over the years. Generally, it’s notable that the majority of those interviewed for the book have favourable opinions, even those offering critical comments. I found the description of Millar’s ascent from club cyclist to overseas amateur and through several professional squads to be inspiring, occasionally sad (e.g. the story of how he came to second behind Delgado at the Vuelta), exciting (e.g. several stages won at the Tour, and riding shotgun for Roche at the Giro), frustrating (e.g. his work in management within BCF/BC following his retirement), and plain baffling (his absolute disappearance in recent years following intrusive investigation into his private life by the tabloid press).

Robert Millar’s career makes a hell of a good story, the book’s a good read, and I rate it highly!